Hey Toronto! The MACHETE MAIDENS Are Coming To The Big Screen March 4 - 10th! 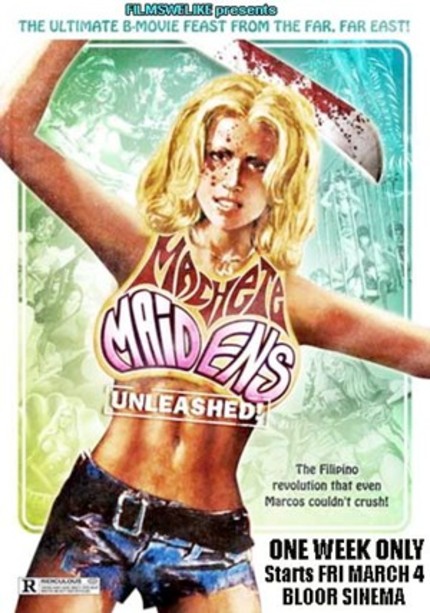 Hey Toronto! You've got one week only to catch the madness of Mark Hartley's Machete Maidens Unleashed on the big screen! Check it out!

From the early-'70s to the mid-'80s, The Philipines was in the grip of a brutal dictatorship and under martial law. Fighting back was forbidden. Chaos was contained. Indecency was punished. There was no sign of revolution.

EXCEPT IN THEIR MOVIES!

And during the classic grindhouse era of that same period, independent producers began turning out more and more exploitation features for less and less money. As the cycle wore on, there was a demand from audiences for more variety in settings and situations, and a demand from producers for lower budgets. Since it already had an infrastructure conducive to the making of inexpensive films, the Philippines fit the bill to a T. Labor was cheap, there were skilled technicians and equipment and, possibly best of all, the military dictatorship of Ferdinand Marcos looked upon the enterprise favorably, contributing everything from tactical assistance to military firepower. One interviewee refers to the Philippines at this time as the "wild east", and that assessment certainly seems apt as we hear story after story of gunfights in hotel lobbies, rats the size of poodles and the most insane, irresponsible stunts imaginable. As shocking and lurid as many of the women-in-prison, jungle action, mad scientist and martial arts movies made in the Philippines were, the back stories may actually surpass the films in their shocking details. But when the films being discussed and shown in Hartley's trademark montage style are as wildly entertaining as FOR YOUR HEIGHT ONLY, MAD DOCTOR OF BLOOD ISLAND, THE TWILIGHT PEOPLE, THE BIG DOLL HOUSE and TNT JACKSON, it may be a tie.

Exploring filmmaking in the Philippines during the Marcos era, when miniature James Bonds, karatekicking soul sisters, snake-loving babes, anorexic Rambos and gun-toting nuns were the rage.

"...might just be the funniest, fastest, most shocking film you'll see all year." -FANTASICFEST