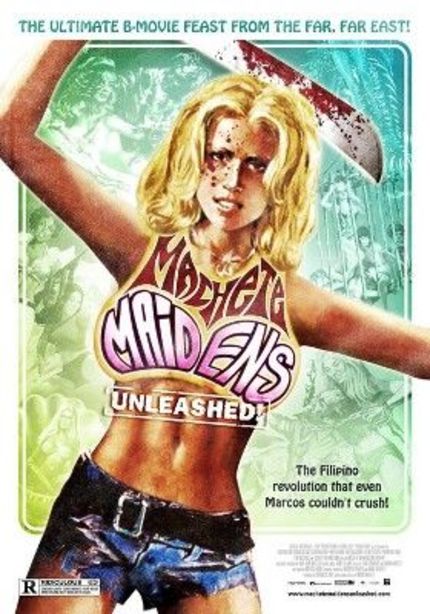 Aussie documentarian Mark Hartley returns with another exploitation expose for the discriminating connoisseur of crap. Only this time around he emigrates from his native Australia to focus on the down and dirty films of the Philippine Islands. Those familiar with the fantastic Not Quite Hollywood should already know what to expect- a kick ass clip show featuring the absolute best of the absolute worst. You want gore? You want sleaze? Secret agent karate midgets? Then you've come to the right place. Machete Maidens Unleashed is a veritable smorgasbord of gratuitous nudity and over the top violence, seasoned with a dash of exotic Filipino spices.

But Maidens is more than just a B movie mix tape full of cheap thrills; it is educational as well. Dare I call it edutainment? I dare. Hartley has assembled a rouges gallery of talking heads- including Joe Dante, John Landis and Roger Corman- to act as our collective guide through these murky cinematic waters. The first stop on the tour? Gerry de Leon and Eddie Romero's blowtorious Blood Island trilogy. These no budget monster movies were invisible to critics, but caught the attention of the business savvy Corman. Once he got a whiff of the cheap labor and exotic locales available in the Philippines, he immediately set sail for this exciting new world.

A large portion of the film revolves around the anecdotes of Corman and his crew. If some of it seems familiar, that's probably because you've seen Elijah Drenner's American Grindhouse, which mines similar territory. In that respect, Maidens isn't as niche as Not Quite Hollywood. Because although set in the Philippines, this is essentially a doc about American made films. It even takes a brief detour into the heart of darkness to highlight the troubled production of Apocalypse Now. While appropriate, I would have preferred to see Hartley explore some lesser known material, like Elwood Perez's oddball sexploitation flick, Silip: Daughters of Eve. Unfortunately, it must not have fit the whole "stranger in a strange land" angle of Maidens' narrative.

Which is fine, because there is a bigger political picture here. One of the most fascinating things about this story is that it takes place against the backdrop of the Marcos regime of the 70's and 80's. According to the director's statement, this is what attracted him to the film, which started out as a doc about cult Filipino actor, Weng Weng the dwarf. The Philippines were under martial law at the time, and the government had complete control over the media. Strict indecency laws were being enforced. But even though the average citizen could be arrested on the street for the most minor infraction, Marcos was allowing American producers to churn out subversive movies full of taboo subject matter. He even loaned them the use of military vehicles and personnel (when they weren't being used to wage war on communist insurgents.) Turns out, Marcos was a huge patron of the arts- and by arts I mean the US dollar. It wasn't the safest way to make a movie, but (most) everyone lived to tell the tale.

And what a tale it is. Hartley has crafted another highly entertaining film; full of breasts, beasts and blood. It almost makes you want to seek out these schlocky gems, even though you know you've just seen the best they have to offer. Hartley is doing the lazy film buff a great service by distilling entire catalogs of B movies down to their sizzle. I'd be perfectly content for him to continue down this career path, jet setting from country to country, mining everything from Giallos to Hammer films to kung fu flicks. Because for every "classic" film these genres have to offer, there are dozens more that are unwatchable. And a film like Machete Maidens ensures that we'll never have to watch them.

Machete Maidens Unleashed screens on Saturday, July 2nd at the Walter Reade Theater. Tickets and info HERE.
Joshua Chaplinsky is the Managing Editor for LitReactor.com. He has also written for ChuckPalahniuk.net.