The Mysterious Case of 7AAM ARIVU (THE SEVENTH SENSE) 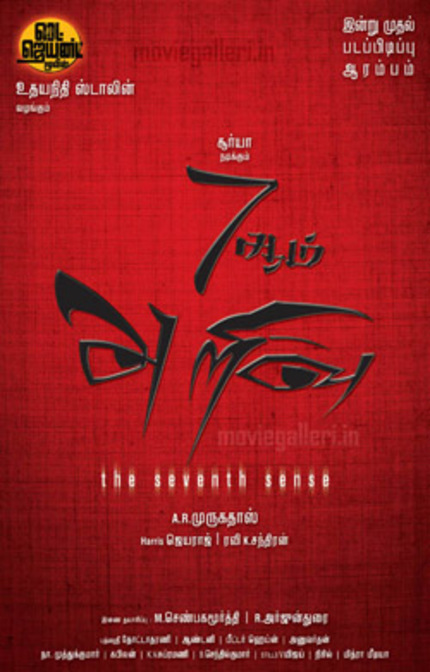 Google is a marvelous thing.  Earlier today I was scanning my facebook news feed and came across photos from a new Johnny Tri Nguyen film shoot.  I got excited, I gushed about Nguyen in my review of Bay Rong, and I wanted to know what it was all about.  The title of the photo album was "7th Sense".  I tried looking it up, Johnny Tri Nguyen + Seventh Sense came up empty.  Okay, try again.  I went to the only English language Vietnamese news site I could find, nothing.  Okay, the album said the pictures were from Chennai.  Found the Chennai local paper online, nothing.  I gave up.  I said, "screw it", and went looking for news about Kamal Hassan, just because he is a badass.

Anyhow, a couple of links down the page, there is an article about whose headline reads: "Tamil Hero Suriya pays tribute to Raj Kapoor and Kamal Hassan".  Sounds interesting enough.  I went to check it out and what do you know, Tamil superstar, and co-star of Ram Gopal Varma's Rakta Charitra, Suriya is starring in a trilingual (Tamil, Telugu, Hindi) big budget film called...  7 Aam Arivu, or The Seventh Sense!  There isn't a whole lot of solid info on this film.  It stars Kamal Hassan's daughter, Shruti, and apparently Suriya plays some kind of circus performer with a special talent.  All of the news is very vague, India is a country where often the star of a film is enough to sell it to audiences, and story comes second.  Further digging uncovered that apparently Tony Jaa had been contacted about playing the villain in the film, and that news was as late as July, but we ScreenAnarchy folk know that Jaa is currently unvailable.

Using my powerful intellect, I have deduced that 7 Aam Arivu has contracted none other than Vietnamese badass and professional kung fu villain (Cradle 2 Grave, Tom Yum Goong, etc...) Johnny Tri Nguyen for the part of the villain in The Seventh Sense!  Probably.

What I do know is that The Seventh Sense is being directed by A. R. Murugadoss, whose last feature, Ghajini, starring Aamir Khan, was an all time box office champ for a whole year until Khan's next film, 3 Idiots, knocked it out of that spot.  Murugadoss has a LOT of expectation to live up to with this one.  It looks like the production company are going the Enthiran route here as well, simultaneously filming in the three most common Indian languages and aiming for an English dub for western markets.  This is very aggressive for an Indian film.

Following the international success of Slumdog Millionaire, Indian film companies are taking advantage of the new focus on their industries and looking to expand.  I think this is a trend that will continue to grow, and hopefully we are just seeing the beginning of a new, more internationally visible Indian film scene!

The Seventh Sense is tentatively scheduled to hit theaters in late 2011.