[UPDATE] AR Murugadoss' 7aam Arivu: What Is It? 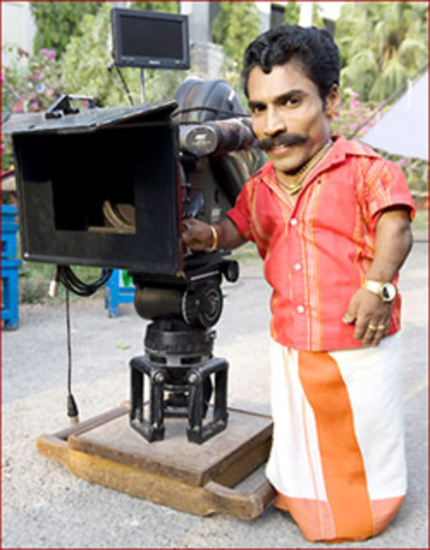 [OK.  Indiaglitz is now reporting that 7aam Arivu is, "a contemporary sci-fi thriller set within the architecture of the mind."  There was scuttlebutt in India long ago that following their take on Memento with Ghajini, Murugadoss and company would take on Christopher Nolan's Inception.  Perhaps it is true after all.  It is a dreamscape medical thriller set in a circus.  With a dwarf.  Hmm.]

I've been trying to follow the progress on Ghajini director, A.R. Murugadoss' new film in production 7aam Arivu for a couple of months now.  Really, I'm only more confused.  My initial interest came through the idea I had that Johnny Tri Nguyen (The Rebel, Tom Yum Goong) was co-starring, even though I've seen not one shred of news to back this up, apart from my own report which is apparently good enough for Wikipedia.  However, trying to determine a plot is very frustrating since they have not come out with any statements.  However, here is what I'm imagining:

7aam Arivu aka Ezham Arivu aka The Seventh Sense is the latest film starring (for sure) Tamil superstar Suriya Sivakumar and Shruti Hassan (daughter of Kamal).  It is a medical thriller/circus picture that also stars Johnny Tri Nguyen as and evil, kung fu villain.   Recently added to the cast, presumably in the role of circus ringleader/triage nurse is Guinness World Record holder for the shortest working actor, Guinness Pakru, Malayalam movie star.  The latest news also suggests that Stan Winston Studios, who did extensive work on Rajinikanth's Enthiran, will be on board for special effects.

This will either be the greatest film ever, or it will be this

Either way I can't wait to see it!  Stay tuned!