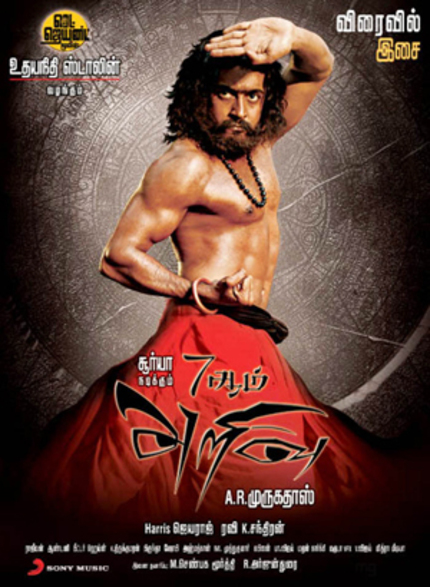 I've written a lot about AR Murugadoss' (Ghajini) upcoming spectacle, 7aam Arivu, but until now there's been very little video evidence, apart from some music videos.  Today, however, the production house, Red Giant Movies, finally released the first Tamil language trailer for the film, and it is a doozy!

The actual plot details of the film are still a bit hazy, but we know a few things.  The film opens with a 20 minute sequence set in the 5th century with Bodhidharma traveling to China to spread Buddhism and, according to legend, the martial arts.  Suriya, the star of the film, plays Bodhidharma as well as at least one other character in the film, possibly two. There is time travel, kung fu, martial arts, circus action, romance, dancing, you name it.

This is likely to be the biggest Tamil film of 2011, with a cast and crew that have a serious track record of hits.  Director AR Murugadoss is one of India's most ambitious and creative talents, and the DP, Ravi K Chandran is also very well-regarded with numerous awards for cinematography under his belt.  Co-starring in the film are Shruti Hassan, daughter of India's greatest living actor Kamal Hassan, and Vietnamese superstar, and friend of ScreenAnarchy, Johnny Tri Nguyen.  Shruti Hassan has yet to deliver on the promise of her father's name, which makes me a bit nervous.  All of her films thus far have flopped, but I think she's managed to surround herself with enough talent that the film won't sink or swim on her performance.  Nguyen, on the other hand, is a power house.

Twitch broke the news of Nguyen's appearance in this film almost a year ago, and at the time I was relatively certain it would be a brief cameo.  However, in this new trailer, there is a lot of Johnny Nguyen.  He appears to be the main villain, which is good for the film, and hopefully for Johnny, who deserves a lot more love than he gets.  Initial reports before production started had Tony Jaa connected to the project, but that was just before he went crazy, and they managed to scoop up Nguyen instead.  Nguyen is certainly the better actor of the two, and his more graceful martial arts style seems to fit with the aesthetics of the film better than I could have seen Jaa fitting in.

7aam Arivu is set to release on Diwali, which is October 26th this year.  The film opens against another big budget Tamil film, Velayudham, starring Vijay, so it will be interesting to see who comes out on top.  It is also opening against Shah Rukh Khan's Ra.One, which will undoubtedly be the juggernaut this fall, although I expect it to have relatively little impact on the south Indian box office.  We shall see, I intend to see them all. No word from Red Giant Movies yet on whether or not 7aam Arivu will be subtitled for overseas theaters, but their last in house production, Kamal Hassan's Manmadham Ambu, was English subbed, so there is hope.