J Hurtado
Editor, U.S. ; Dallas, Texas (@HatefulJosh)
Tweet Post Submit
Ever since Johnny Tri Nguyen accidentally leaked set photos from 7aam Arivu back a year ago, I've been psyched about this project.  In the intervening year, I've learned a lot about its Tamil star, Suriya, and I'm learning a lot about the Tamil film industry as well.  Mostly, though, I'm just psyched to see what sounds like an amazingly insane feature.  In the time since I last posted promotional artwork, some possible new plot details have leaked which only intensify my interest, so I thought I'd share what I know with you to see if I'm crazy or if this sounds like a ton of fun!

From what I've read the film focuses on Suriya's character, who doesn't yet have a name.  A modern scientist, played by Shruthi Hassan, invents a time machine, which becomes a target for gangsters and crooks to control their own fortunes.  Suriya's character aims to protect the invention from falling into the wrong hands.  In the service of this goal, he apparently travels through time, natch, into ancient Tamil history.  Here's where it gets murky...

Suriya was initially said to be playing three roles in the film; a 5th century Buddhist monk, a scientist, and a circus artist.  The producer, Udhay Stalin, has confirmed that Suriya will be playing only two roles.  One is a Buddhist monk, I've seen behind the scenes footage of this. There is talk that he is portraying Bodhidharma, a famous early evangelist of the Buddha who traveled from India to China and brought martial arts to the Shaolin Temple.  This kinda fits, Bodhidharma, as history records, was most likely a Tamil Prince who traveled to China in the 5th century.  The martial arts stuff is a bit less of a sure thing, though. An interesting theory, and one that has some ring of veracity.

Suriya's role as a circus performer is almost certain as well, since the producer and director have been bragging about his talents and the training he underwent to perform his act in the film.  In fact, Suriya was initially expected to perform circus acts at the music launch for 7aam Arivu, but conflicting schedules with his next film, Matraan, have made that impossible.

Then there is this. 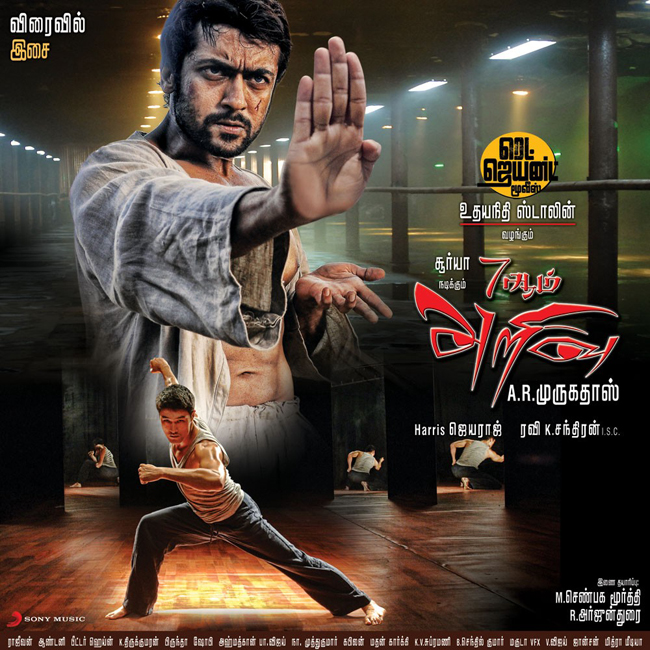 This looks like neither Bodhidharma nor a circus artist.  It does, however, look fucking awesome.  That guy at the bottom is my dude-crush, Johnny Tri Nguyen (The Rebel, Clash). Nguyen is apparently the main baddie in 7aam Arivu and the person who most wants the time machine.  How this all comes about, I have no idea, but time-traveling ass-beatings surely take place in abundance.  There is also word of a musical number with over 1,000 dancers.  Seriously, I heard that.  Gnarly.

The music launch is scheduled for September 22nd in Chennai, and the film's release is scheduled for Diwali, which is an odd choice and one packed to the brim with stiff competition.  First there is the Hindi juggernaut in the making, Ra.One, but even if you discount the Hindi film's draw in Tamil Nadu, they are also going up against ANOTHER Tamil superhero film starring Vijay titled Velayudham.  Velayudham is a BIG DEAL, I haven't posted any news on it only because I'm waiting for a solid trailer to appear.  Diwali is the BIGGEST movie opening holiday on the Hindu calendar, and having three major releases stacked up is a risky proposition.

Opening day/weekend/week numbers are even more important in the Indian film business than they are in Hollywood. This is why splitting the audience on such a big holiday confuses me a bit.  Another tendency of Indian film fans is to see films with their favorite stars multiple times in the theater, sometimes more than once in a day.  When I went to the evening show on the second night after Enthiran opened last year, some of the people there were on their 3rd or 4th showing.  This is important because in India Diwali is like Christmas in North America in that it typically means a week without work, which is more time for families to spend at the cinema.  I fully expect all three film to put up massive numbers, time will only tell how massive.