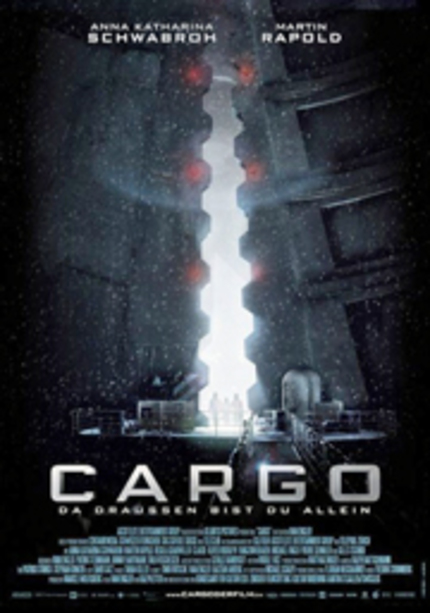 Eight years. 2 million dollars. Swiss.
Make it your mantra when watching Cargo. Cause in the time that it took the filmmakers to put together this nifty offering to the Sci-Fi genre other higher profile films have been made, screened and lauded for their originality, unique perspective, or technical achievements. It's just  dumb luck that Cargo has to follow up films like Moon and Sunshine otherwise some of the aspects of this film would have made it stand out better than it does on the dark side of those films.
Eight years. 2 million dollars. Swiss.
The story is as straight forward as you can get, it is the 23rd Century and the Earth is uninhabitable. Everyone wants to go to this new planet Rhea. Laura, a young medic, has signed onto a cargo freighter for four years to earn her passage and be reunited with her family. Every one of the crew members has to do an 8-month shift alone on watch. On her shift Laura discovers she and the small crew are not alone, and what is hiding in the shadows may kill them off one by one. And what really are they transporting in the cargo hold? The screenplay and plot structure is a connect-the-dots kind of film, complete with twist. Early in the film you will already have it figured out. I imagine when you've made the first true Sci-Fi film in your country you have to be certain that it is as commercially accessible as possible. So there is not mucking about with the plot; time for the K.I.S.S. method. Keep It Simple Stupid... erm... Swiss.
Eight years. 2 million dollars. Swiss.
The key concern about the screenplay is that tries too hard to make the most out of small situations. Case in point, there is the scene when the cargo hold starts to shuffle the containers automatically and Laura gets stuck on one, dangling off the side. The music ramps up. The camera starts to speed up a bit and zoom up close and back. OH MY GOD SHE MAY POSSIBLY FALL AND END THE FILM 30 MINUTES TOO SOON! And as such I felt the focus was misplaced on minor events like this one. Rather than build up the tension about say the mysterious shadows on the walls the screenplay flirts about these issues from one to the next, not fully realizing the few plot points or trying to draw them together at the same time. And there is a Mission to Mars moment of melodrama during the climax that only succeeds in knocking down the ending a few pegs too. Don't worry Tim Robbins. You would be proud to know that they came close but your cheesiest moment in Sci-fi history has not been outdone.
Eight years. 2 million dollars. Swiss.
I will tell you one thing that has stuck with me since seeing Cargo. It is literally Winter in the cargo hold. When entering the cargo hold the crew members have to wearing cold weather suits and it is actually snowing inside. Funny the things that you focus on though. Usually, everything is so damn hot or just right but in ship's cargo hold it is cold. Of course it is cold. It is deep space damn it. Because it was so obvious that they had to bundle up before entering the cargo hold I was caught short by it. Huh? How come no one has done that before? Which I am sure they have, I just cannot tell you when off the top of my head.
Eight years. 2 million dollars. Swiss.
Special effects for the most part are pretty good considering the size of budget. There were a couple instances where it was obvious, sometimes painfully so, but they were mostly seamless. Regardless, the Art Design and the amount of visual awesomeness that the effects crew was able to manage on such a meager budget are very impressive. Creativity outplays budget every time.
Eight years. 2 million dollars. Swiss.
Rather than fully condemn Cargo for what it isn't, we should be celebrating it, for it exists as a showcase of what a smaller country, with no experience in Sci-Fi, can do with the genre, and do rather well, all things considered. As a Sci-Fi film it is okay. As a contribution to the genre it offers little that is new or unique. Dare I use a common phrase in the Sci-Fi lexicon that all Sci-Fi lovers will understand? Cargo doesn't boldly go where no man/woman has gone before. However, let's celebrate a film that was made over 8 years, for $2 million and from a first time contributing country to the genre.
This calls for a fondue!
Sign-In to Vote
Tweet 0 Submit

I fully concur with this review. Nitpickers can have a field-day if they like (there sure is plenty of opportunity) but I was very charmed by this film.

And it's not the "Eight years. 2 million dollars. Swiss" mantra that makes me so forgiving, it's the obvious love that went into this. I thought the enthusiasm behind the camera was somehow catchy.

This is a very good movie in many ways but it suffers from the same lack of imagination in conceiving a believable future as do the Alien movies. The story is set in 2237, 226 years from now. Mankind has now achieved light-speed travel but in all other respects technology has made no progress and is stuck firmly in 21st century. People are armed with handguns that fire bullets and the design of everyday items such as clothing shows no changes. Certain scenes make little logical sense, especially the idea of sending a message to Earth from inside a simulated reality that exists solely inside one's head. The movie badly needs a stronger story and better developed and more credible characters.Visually, it is very impressive considering the size of the budget, but special effects are so advanced today that something else is essential in order to maintain the audience's interest during the entire movie, especially one that clocks in at almost two hours..

Have to watch this one.... I really love sci-fi.