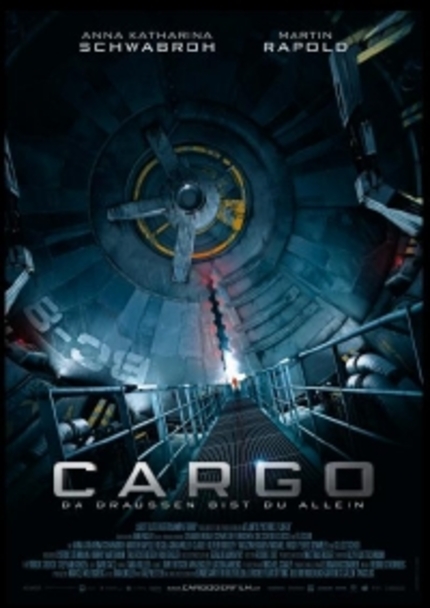 Swiss science fiction offering Cargo is a difficult film to judge because depending which criteria you use you will arrive at wildly different conclusions.

If, for example, you judge the film acknowledging it as the first significant attempt at large scale science fiction ever to emerge from Switzerland and accomplished on a budget a tiny fraction of what Hollywood spends on this sort of thing then you cannot help but be impressed - very impressed - by what directors Ivan Engler and Ralph Etter have accomplished here. Their raw talent and creativity is obvious.

If, however, you judge Cargo against the canon of large scale scifi it comes up considerably shorter. That the budget limitations occasionally peek through is less an issue than that the story is overly familiar, the premise one that has been played out many time before and the directors just don't bring enough of a fresh spin to the table to really create anything new. Because the core ideas are so familiar, because the film often feels like a pastiche of other better known films, it is almost impossible not to spend the run time comparing it to a series of acknowledged classics and, in that context, the limitations of this particular film become clear.

The story revolves around Laura, a young medic on her first voyage aboard a massive cargo vessel transporting goods to a distant space station. To preserve resources the crew spend most of the trip in hibernation with only one person awake at any given time to monitor essential systems. But when Laura awakes for her turn at the wheel it quickly becomes apparent that someone - or some thing - else is on board and awake with her.

The strengths of Cargo lie in its art design and the directors' commitment to creating a plausible vision of the future. The ship itself is painstakingly detailed, the technology all making good logical sense as a realistic extension of current trends. It's a believably lived-in space, a refreshing change when so many low budget scifi efforts rely on digitally generated, entirely sterile environments to keep cost down. Likewise, the characters are quite believable, for the most part, all of them with clear and realistic reasons for being on board.

The problem is one of over familiarity. Anyone familiar with the genre is going to know what this story is and where it is going very early in the proceedings. And while Engler and Etter execute their set pieces with precision that familiarity is an absolute killer when it comes to the thriller aspects of the story. It just can't scare you - not really - when you see it coming.

A project that Engler put literally years worth of work in to before finally being able to see his vision on the screen, I just couldn't help wishing that Cargo worked better than it did. The technical skill is certainly there, next time out Engler just needs a fresher story.
Tweet Post Submit