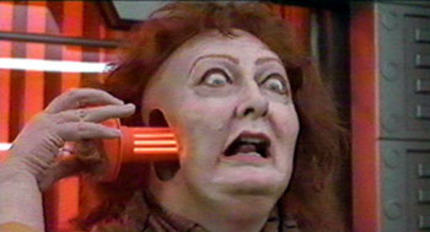 Because Leonardo DiCaprio is now making it a habit of playing damaged characters with all the answers and none of them (simultaneously) it is difficult not to look at Inception without it bringing to mind Shutter Island (and a touch of Revolutionary Road.)  There is even twin scenes of a rattled and ill DiCaprio leaning into a sink and splashing water on his face to either steel his nerves or wake from the nightmare.  Whereas Scorsese moulded his film on the noirish Val Lewton films from the 1940s with Gothic sets, character driven and macabre imagery, Christopher Nolan is building off the new millennium blockbuster of the Wachowskis, Michael Mann and Michael Bay.  While he certainly adds a lot more brains to the proceedings, the film is all steel and glass and clean geometric lines.   Nolan as a screenwriter is not above the classical mythology name-dropping (Ellen Page's dream architect is so named after Ariadne, she who helped Theseus out of the Minotaur's maze) favoured by slightly more pretentious writers along the lines of Richard Kelly, The Wachowskis or the creators of Lost.  Do not get me wrong, Inception is head and shoulders above the big budget science fiction extravaganzas of the early 2000s, but seems far more interested in connecting its own dots and shooting off its big guns rather than goosing its audience with the subconscious ugliness that Marion Cotillard represents in the film.  Contrast Natasha McElhone's suicide and confused-yet-aware construct in Soderbergh's Solaris or the hyper-conscious meltdowns of Naomi Watts or Laura Dern in the two post-millennial David Lynch films.  They are all gut punching, heart-ripping moments that crawl up into your brain and lay eggs.  Inception is far more concerned with watch-building and origami and telling you the trick before showing you.  But dang are those pretty and complex baubles crafted here!  As the directors film following the wildly successful The Dark Knight, there is no Joker to put a dangerous and ribald anarchy into the mix.  To use another belaboured filmmaker analogy, comparing Nolan's Inception to the far more down and dirty The Prestige is like comparing David Fincher's pretty but frivolous The Curious Case of Benjamin Button to Fight Club.  Maybe it says something about me that I prefer sticky and mean and darkly funny over comforting and visual and slick.

The film wrestles with a concept it explicitly states within the film, "How do you translate a business strategy into an emotion?"  You see a $200M dollar venture cannot go to the ickier or weirder places without alienating the size of an audience it needs to earn its moolah back.  So instead of the gonzo awesomeness of Paprika, Synecdoche New York or The Fountain we are left with something just a little too polished and linear to truly rattle those transfixed eyes in the dark.  It is kind of baffling to criticize a movie for articulating its concept so elegantly to its own viewership, not to mention astounding in its construction, but the parts that should niggle at your soul and vex the brain are all in the structure and not at the heart of things.  The trailer for Inception plays like that jittery subconscious video tape from Ringu, yet the film plays like The Matrix.  One thing that differentiates Inceptions 'reality' from the red pill/blue pill (or going back further, Neuromancer's ultimate closing bargain to the broken protagonist in William Gibson's seminal novel - a pact to live in bliss, retroactively unaware of the artificially controlled construct that you have surrendered to) is that it postulates that reality is whatever we choose it to be.  In a bull session over beers and wings (or port and brie) I am not going to convince you that God does not exist, or that liberal-libertarianism is the better way to live than the religious right, because both you and I see the world through such fundamentally different glasses that our reality is our own.  As M.C. Esher clearly shows, perspective is a harsh mistress (and life is too busy or too comfortable to really face her.)  It is Cobb's greatest trick in that he very likely 'incepts' himself, not Cillian Murphy's heir to boring old billionaire Kobayashi (the ever ubiquitous Pete Postlethwaite) or just happy to be a rich space-tourist, Saito (Ken Watanabe.)

Because nobody wants to build elaborate practical sets unless they can spectacularly destroy them, Inception is as much about tearing down and folding physical space as it is building up ideas.  As with any effective dream, we enter in the middle of the fray and stay the duration because the movie stays in perpetual motion, like the spin-top talisman constantly used as a plot barometer.  Inception is an admirable collection of practical set-pieces (go go Zero Gravity Hotel!), exposition on dream theory and M. C. Escher writ large as a science fiction heist flick. Yet for all its hubris about the idea as a virus (one explored with more casual humour and paranoia in last years micro-budgeted Pontypool) all the hard science fiction takes a back seat to the popcorn munching.  Sure this may be one of the more ambitious and thrilling blockbusters to come along in years, and it rightfully expects its audience to pay attention, but since the platform has already been built with The Matrix and Eternal Sunshine of the Spotless Mind, all you need is a very fancy train to pull into the station.  There sure is a lot of hand-holding exposition that hamstrings its talented cast, particularly Joseph Gordon Levitt who is reduced to slick clean-up operator, Ellen Page as more of a pathfinder than an architect and Tom Hardy as dead-pan comic trickster and sniper (looking so far different from last years serial crazy Bronson that it is uncanny - here, he is essentially James Bond, darling).  Michael Caine cameo-ing for less than 10 minutes of the films 2.5 hour run time walks away as more of a human being than just about anyone else caught up in the Rube Goldberg corporate ploy.  I will concede the out of left field casting of Tom Berenger who is a bit of a hoot to see as pudgy and a clueless corporate player.  And Marion Cotillard, is sexy and sad, but even icier than Samantha Morton in Code 46.  (Tangential aside:  co-incidence or not that the song to pull people out of dreamland was Édith Piaf's iconic "Non, je ne regrette rien" where Cotillard has an Oscar on her shelf for the 2007 biopic of the diminutive french vocalist?  The song is of course ironically appropriate to the films themes of guilt and manipulation and hermetically sealed happiness.)

So in the end, Inception is more interested in wow-ing you with cleverness, conforming your imagination by showing off the abundant brainy craft, all the while having your plug together the plot and guess the reality rather than searing your soul.  There is not a boring minute in the whole enterprise, but it is more of a ride than a consciousness expander.  See you at the Party, Richter!