INCEPTION: What to Think. 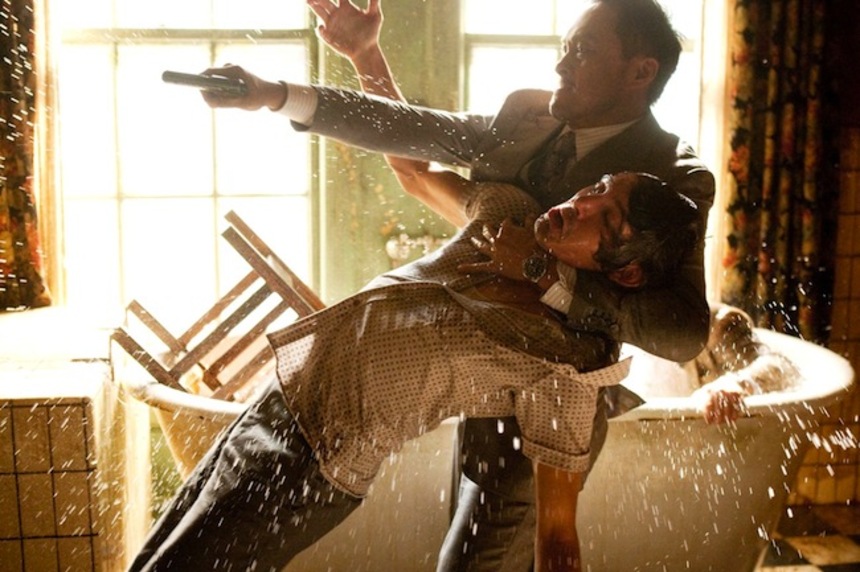 Let's get something out of the way: you should see INCEPTION. Even if you have no interest in seeing it, see it. If only so you can continue reading, and not hate me having ruined it for you.

INCEPTION is a heist film in which a gang of thieves led by Leonardo DiCaprio is assembled to break into a subject's subconscious, and steal an idea. But what makes tonight's heist different from all other heists? Today, American summer movie patrons, instead of simply extracting an idea, we're going to be planting an idea in the mind of a subject. That's "inception." Now, if you're intrigued by that four sentence summation of the film's premise, but are saying to yourself "I could use about 45 more minutes of exposition about that," you're in luck!

It's a feat that director Christopher Nolan is able to imbue so much new vocabulary with any entertainment value at all, but the man pulls it off, as always, with panache. The last time I enjoyed digesting this much information was watching PLANET EARTH on ketamine, heyo, etc. Yet something about all that digestion kept me from being totally immersed in INCEPTION, at least the first time around... Still, even on a second go, are these characters going to improve? Sure, the whole dream catchin' crew (Joseph Gordon-Levitt, Ellen Page, Tom Hardy and Dileep Rao) are good looking and by all accounts punctual, but none of them are developed any more than your average Scott Caan in any particular OCEAN'S movie. This is a heist picture, that's the heist crew, you don't have to give them any dimension, that is one option. But by the time the second hour of INCEPTION hits and the talking heads are still yakety-yak'ing over the in's and out's of of inception, it all comes uncomfortably close to a handsomely staged reading of Chris Nolan's spiral notebook.

Leo, as the head of the crew, is named Dom Cobb. (Dom Cobb? You know where that name belongs? On a page in Chris Nolan's notebook, with a red line through it. And possibly a sad face.) And though it's Leo that's meant to be the emotional center of the film, this never really pans out. Dom's wife Mal, (Marion Cotillard,)  we learn, is long dead - but operates as a sort of ghost in the subconscious, appearing and causing malaise for her widower whenever possible. It's an interesting concept, and there's even some poignancy to it when we finally see the full picture of Dom and Mal Cobb's ill-fated romance, but the execution is questionable, bordering on unintentionally funny, as in the scene where Mal appears in an arctic jumpsuit and guns down young Fischer (Cillian Murphy.) Still, as far as detective-guy-guilt-stricken-over-his-wife's-suicide-that-he-was-kind-of-responsible-for movies go, Nolan's own MEMENTO is still much better: tighter structure, more engaging protagonist, and it's a cool half hour shorter.

Something about INCEPTION kept hitting me as a re-statement of MEMENTO, with $200,000,000 to spend. The big emotional revelation is similar in more ways than one, while the bells and whistles here dwarf the neo-noir economy of Nolan's breakout indie. With every movie, the man's budgets get bigger, hey good for him, and this is by far his biggest non-Batmovie. He's grown accustomed, perhaps, to making those movies, but that now familiar style bleeds over here, (booming Hans Zimmer score check, Wally Pfister helicopter shots check,) when INCEPTION could have benefited from being weirder by a quarter. For all the possibilities a film about a dreamworld presents, it's disappointing that Nolan sticks so close to what he knows. From INSOMNIA to BATMAN BEGINS to THE PRESTIGE, Nolan puts some sort of snowbound castle in almost every movie he makes. Cue act three of INCEPTION, set in: some sort of snowbound castle. Hey, the guy likes ice! Leave him alone! But Tom Hardy skiing around this fortress picking off baddies like he's James Bond isn't exactly the stuff from which dreams are made... Though it was interesting to read that in the press rounds for INCEPTION, Nolan let it slip that he'd like to direct a James Bond installment himself. Whether that's an empty promise remains to be seen, (hint: it will never happen ever,) but the finale of this film shows potential for a Nolan Bond. That is to say, it's a sequence that might have worked better in another movie.

All of a sudden, in mid-Bondage, a door is opened into a room deep inside the subject's subconscious, and we've walked straight into an overt visual connect to Stanley Kubrick's 2001: A SPACE ODYSSEY. Now, it's a losing game, calling out 2001 in any movie not as good as 2001, (i.e., just about every movie,) and here it serves as a comparison only favorable to Nolan in that Kubrick himself wasn't known for the warmth that exuded from his films, either. But Nolan's use of this allusive room turns out to be a handy gauge for what separates the two filmmakers. In 2001, the room Dave Bowman enters is a place uncharted, the final destination of the odyssey into his own mind: ultimate truth. In INCEPTION, Nolan's room is the equivalent of The Big Store in a long con game. It's a false construction, built to fool the subject: a sham version of the 2001 space it emulates. Like the room that acts as its final treasure chest, INCEPTION is outstanding modern trickery - but compared to the 2001, it feels like OCEAN'S 2001. Just a game.

Nolan's not Kubrick. For all his ambition, he doesn't work across genres, he works in one. Christopher Nolan makes thrillers. He makes terrific thrillers, and INCEPTION is absolutely one of those, but it isn't a step outside his skills, it's a straight-up showcase for them. His limitations are on display here, too.