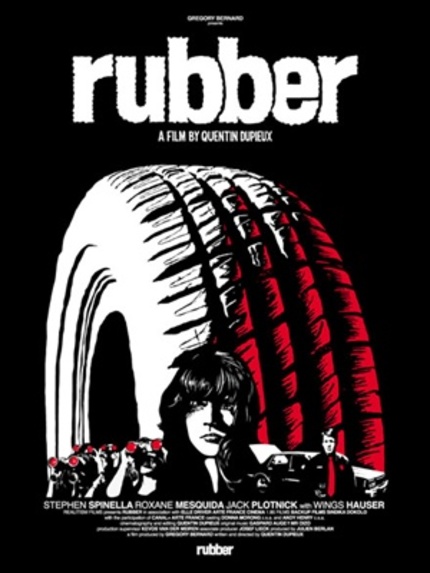 [Todd's review of Rubber originally ran with the film's appearance in the marketplace at Cannes, but with it now screening on the midnight programme at Fantasia - we present it to you now.]

Quentin Dupieux's Rubber would have made an absolutely stellar twenty minute short, one that would have certainly been an enormous cult hit however you chose to measure it. How it works as a seventy five (or so) minute feature, however, is up for considerably more debate. The run time is undoubtedly going to divide people along very sharp lines. For those who thrive on the willfully absurd, Dupieux's creation will be an instant hit. For those whose tolerance is lower, however, the joke will likely run thin will before the run time comes to an end.

The film opens on its highest note. A car drives through the desert, knocking down a series of crumbling chairs on the way, before rolling to a slow stop. The trunk opens and a police officer emerges, accepting a glass of water from the driver before delivering a rousing monologue on the virtues of No Reason. This is brilliant, fantastically clever stuff, and in the arena of all top great policeman in the desert monologues it sits right at the top alongside Gary Busey's gleefully deranged bit in Terry Gilliam's Fear And Loathing In Las Vegas. Yes, it's a two entry list but that makes the monologue itself no less impressive. Upon finishing the policeman pours his glass of water on the ground and climbs back into the trunk, at which point the car drives away once again.

From this point on the film moves between two parallel lines. In one, we have a group of tourists who have come out to the desert to watch a film - the same film we are watching, though they watch the events occur live through the binoculars each viewer was handed on arrival - while bickering amongst themselves and offering up commentary on the observed events like some sort of deranged, hyper self-aware Greek chorus. In the other, we have the story of Robert.

Robert is a tire. An all season tire, by the looks of him. Well worn, but still lively as we realize when Robert literally comes to life, using psychic energy to raise himself upright and take his first tentative rolls towards self determination. He does the sorts of things tires like to do. He rolls. He squishes a bug. He squishes an empty plastic water bottle. And then, when he reaches an obstacle he cannot squish, Robert learns that he can use his psychic energies to make things explode. Bottles. Cans. Bunnies. Crows. He explodes them all. And then Robert falls in love with the beautiful brunette he sees driving through the desert. He follows but theirs is a love not to be and soon Robert's rage explodes on those around him ...

Yes, this is really a film about an angry psychic tire. And, yes, it is every bit as absurd as it sounds, which is entirely the point. The surprising thing, however, is how impeccably well crafted the film is. Dupieux serves as writer, director and cinematographer while also providing much of the music under his Mr Oizo stage name. And he does all of them very well, indeed. The film looks fantastic, he handles his human actors well, and the effects are spot on. The simple fact that he's able to convince the audience that a tire can control its own path is a triumph on a technical level. Dupieux, undeniably, is very skilled behind the camera.

Also undeniable is that Dupieux the writer is going to be an incredibly difficult pill for many - if not most - to swallow. Rubber is essentially a one-joke film, one very absurd joke that stretches out for an hour and fifteen minutes. This sort of thing is not impossible to pull off - Hitoshi Matsumoto proved that with Symbol - but there doesn't seem to be much point behind Dupieux's joke besides Absurdity Is Fun. Those who agree are going to happily follow Robert wherever he chooses to lead them but for the rest it's a hard slog through.
Tweet Post Submit