[Winner!] Giveaway: Don't Get Caught Without A RUBBER From Magnet Releasing! 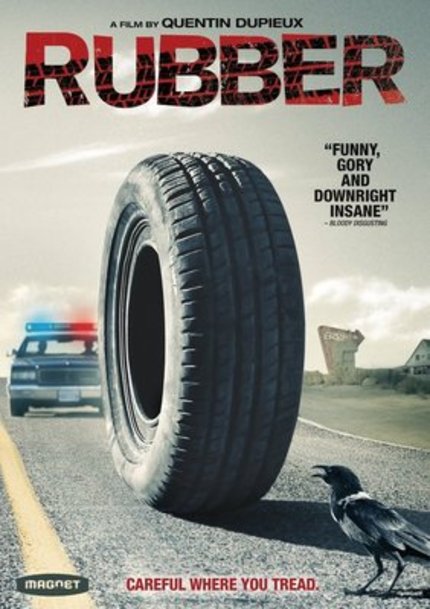 [Congratulations to Bernardo V., who won the Rubber giveaway!  Stay tuned, I hope to have more of these soon.]

Quentin Dupieux's Rubber has been a big favorite around here.  So much so that we have had numerous reviews, DVD reviews, and Blu-ray reviews for various incarnations of this mind-bending piece of insanity.  Last week we had a giveaway for the Canadian disc available on Canadians only, well guess what, it's time for the rest of the world to get their chance!

Magnet Releasing and ScreenAnarchy are bringing you yet another opportunity to win Rubber on DVD!  I'm not going to make you jump through any hoops with this one, simply send me an e-mail and tell me that you want it!

Rubber is the story of Robert, an inanimate tire that has been abandoned in the desert and then suddenly and inexplicably comes to life. As Robert roams the bleak landscape, he discovers that he possesses terrifying telepathic powers that give him the ability to destroy anything he wishes. At first content to prey on discarded objects and small desert creatures, his attention soon turns to humans, especially a beautiful and mysterious woman who crosses his path. Leaving a swath of destruction behind, Robert becomes a chaotic force and truly a movie villain for the ages.

Send your e-mail with the subject line, "Rubber DVD Giveaway" to, josh [at] twitchfilm.net