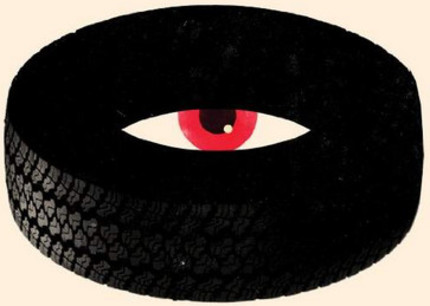 Rubber concerns Robert; an inanimate tire that has inexplicably comes to life. As Robert roams the desert he discovers a power that gives him the ability to destroy anything he wills by focusing on it. His attention turns to a car where a beautiful and mysterious woman (Roxane Mesquida) crosses his path. To make matters stranger, there is also a live audience watching all of this unfold.

The audience is here, you can start now. Is someone reading this? They are? I better continue with my review then. Rubber starts with a desert road and chairs, and then a car purposely drives into each chair before halting to a stop; I was thinking, that's what I would do too. A policeman (Stephen Spinella) jumps out of the boot of the car and addresses the 'audience', a metaphysical concept as he is addressing us, but also 'them', actors representative of us. The audience consists of teenagers, middle aged women, a father and son, a man in a wheelchair and two film buffs. The policeman begins a rant about no reason, why did x and y result in z? No reason, but in fact most of his examples indeed have very valid reasons, but his reason for saying they have no reason is in fact for no reason an homage to the 'no reason'. 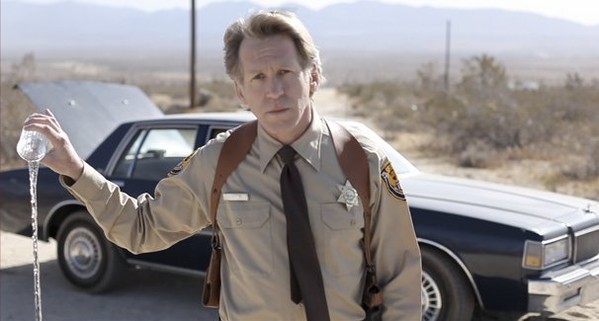 He leaves and the lackey (Jack Plotnick) hands each audience member a pair of binoculars
where they scan the horizon looking for something. Rubber is an experiment, it tests and critically analyses the viewer. After scanning the desert one audience members quips that this is boring, like an arty film; the outside looking in from the inside representing the outside; I am sure someone somewhere thought this film just might be an arty one.

The third window has been decimated; this film world and the rules governing what a film should be, plot and acting are all stretched and bent. The 'film' starts as the audience observes, this is the golden rule, for as long as there is an audience, there is a film. If a tree falls in the forest and no one is around to hear it. So the film progresses, an overture plays as the antagonist Robert comes to life; a rubber tire who wanders the desert and is quickly revealed to be a psychopath who only knows destruction and voyeurism. Speaking of voyeurism, the audience continues to comment on Robert's misadventures, destroying scorpions, plastic bottles and birds with his 'mind'.

Rubber is in fact two films (concepts) that merge messily into one. On one hand we have Robert and his killing spree, on the other the people watching him and the aforementioned lackey who reports to his boss and eventually desperately tries to end the film, by attempting (poorly) to eliminate the audience. First he poisons their food, a live turkey that is cooked overnight and laced by the lackey. His plans are thwarted by one member of the crowd who is obsessed with Robert and stubbornly refuses to eat. It is this man's fault that Rubber is still going, and this review, for if he died at this point, I could probably, albeit awkwardly end my review here.

The telekinetic powers Robert abuses grow thin as animals and humans explode and he makes his way into a motel where the mysterious girl is staying. Robert the vengeful, lustful tire causes further havoc and his actions are witnessed by a young boy Zack (Remy Throne) who nobody believes (and rightly so). Back to the second part of the film, Rubber explores the elements of when a film stops being so, literally. The policeman makes a return, investigating the extremely bizarre sudden deaths and is given word the audience is dead (they are not, as we are now represented by the stubborn man), he informs the others at the inn that they can all go home now, tries to convince them that none of this is real and even takes a few bullets to prove his point, as they do not hurt him. The lackey returns and embarrassingly whispers to him that they are not all dead, and then the film resumes, as a 'film'.

So what is the purpose of Rubber at this point, as a film, with plot; the elimination of Robert. The policeman, the woman and the kid come up with a terrible idea to thwart Robert and it works, only with surprising and hilarious results. 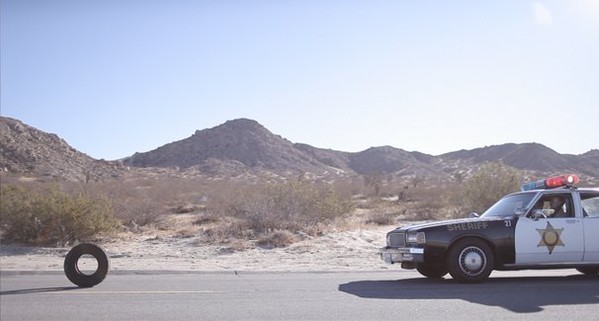 Rubber is an absolutely insane film; it is an experiment that pays tribute to randomness. The end of the film ties up some loose ends, even the remaining audience member, but the ending is more revelatory and intelligent than the film lets on. It is blunt and forced but the final scene is a powerful image that perfectly captures the director's intentions; a total attack on the normalcy of the popular film industry, better known as .

Speaking frankly, Rubber would fail as an experiment and a cult film if it did not focus on the third window aspect. Because it does, this concept of a murderous tire is well paced and not a pretentious bore, that it could have been, so do I recommend Rubber? Sure, sure I do, why not, go out and buy it and watch it, or do not; it actually does exist regardless.

There are no extras on the DVD of note, for no reason.