Fantasia 2010: CASTAWAY ON THE MOON Review 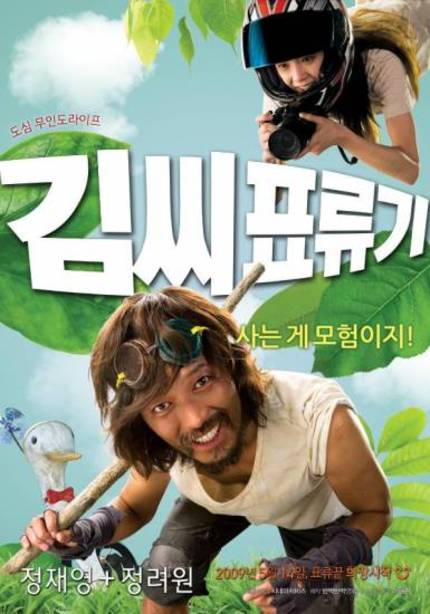 [With Fantasia in full swing, here is the type of films that don't necessarily draw big crowds, but leave the audience pretty happy to have discovered it.  Without further ado, here is Charles' review from the archives]

With some of the more bombastic titles hitting the fest this year, I worry that this quirky little dramedy might get overlooked. It's a fairly quiet movie without a whole lot of big moments but the heart (and melancholy) of it stick with you well after you leave the theater.

Castaway on the Moon (originally titled Kim's Island) sees office drone Kim fed up and ready to end it all with a leap from a bridge. He's drowning in debt, he's lost his job, and his girlfriend has decided to dump him without even a "let's be friends" as a sendoff. Taking a flying leap into the Han River, ultimately washing ashore on a deserted island, just out of view of any potential rescue but still in the middle in the city. You don't have to strain to know there's something here about being lost in metropolis.

Then there's the young agoraphobic girl who also has the surname Kim. She lives vicariously through her blogs, portraying herself as a fashionista about town while her life in confined to a tiny bedroom filled with squalor. She's made her world as small as possible, exposing herself to the outside world through the telephoto lens of her camera. Which is how she happens upon Kim on his island. Through this impossible setup two very lonely people try to communicate with one another.

Now, I've described the movie as "quirky" and I'm sure that the summary above has reinforced that. And to a certain extent that's what the movie does but it's not what it is, if that makes any sense. Let me try again: under the unusual premise there's an incredibly affecting story about being lost, about communication, and about having someone to communicate with. Both Kims' worlds have been carved out and confined whether by choice or by accident and meeting one another allows them to "grow" their worlds into something more. And in both cases, the characters are painfully desperate to make these connections, to overcome the stifling confines of their exile in order to live.

I'm willing to admit that I'm a sucker for sappy endings and lost people finding one another. Sue me. It doesn't change the fact that I feel that this is in contention for one of the best films of the fest, and it's worth your time to get over and check it out.

Castaway on the Moon

More about Castaway on the Moon