TIFF 09: CASTAWAY ON THE MOON Review 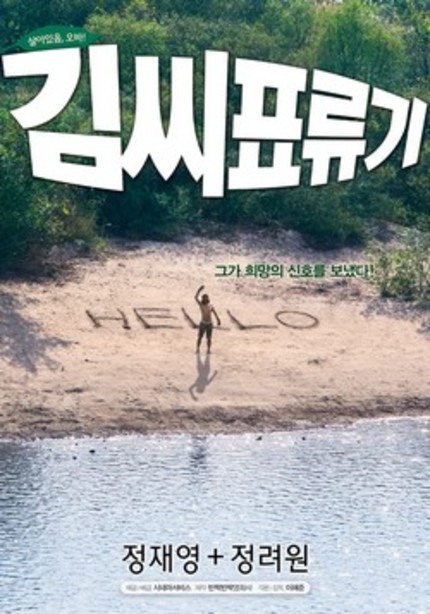 [A TIFF straggler here coming in from friend and regular reader Irene Angelopoulos, who felt so strongly about this film that I told her she had to put her thoughts on paper.  Enjoy.]

It may seem cheesy or overstated to say that Castaway On The Moon (written and directed by Lee Hae-Joon), which takes as its catalyst a failed suicide attempt, makes you feel alive, but it's true.  It's not just the brilliantly timed visual and thematic gags that make this South Korean quasi-rom-com engaging; there's something exhilarating about being just outside of society (Bam Island on Seoul's Han river, to be exact), close enough to thumb your nose at it, far enough away that the horde of debt collectors, unsatisfied ex-girlfriends and unimpressed potential employers become surreal memories.

This is the plight (and eventually, delight) of the film's title character, Mr. Kim (played by Jae-Yeong Jeong).  After his life's failures drive him to the edge of despair, he attempts suicide by jumping off a bridge over the Han river, and wakes up only to find he's failed yet again - this time, at killing himself.  Coming to the realization that, not only did he survive the perilous jump, but that he washed ashore onto the garbage-strewn Bam Island (completely cut off of the mainland), he half-heartedly tries to get back to civilization before giving in to the ways and means of life in the state of nature (and empty detergent bottles).  Seoul's towering skyline plays the stolid antagonist, and through its impassivity and steely lack of emotions, it motivates Mr. Kim to prove his self-sufficiency, crafting traps out of empty canisters and canvas, and even stumbling upon an ingenious seed collecting method that will guarantee you'll never take modern agriculture for granted again.

Still, despite having great conversations with a tin can scarecrow and a giant metal duck, the solitary Robinson-Crusoe-esque life proves to lack two things: friendship and spicy black bean noodles. Ryeo-won Jeong, who plays a hikikomori, or agoraphobic shut-in (Ms. Kim) texts her food and water requests to her mother from inside her room.  She's traded in the harsh realities of face-to-face contact for a fabulous online persona and a night-time hobby of taking pictures of the moon.  However, this frightening fantasy world is challenged when, one day, instead of capturing the moon through her telephoto lens, she spots the stranded Mr. Kim, mooning an unsuspecting Seoul.  The unique relationship that blossoms between these two societal outcasts is heartbreakingly singular in an age of global standardization.

A beautifully shot, original screenplay that strikes a fine balance between poignancy and hilarity, Castaway on the Moon is definitely a hidden gem of TIFF 09, cruising just below the radar of the twittery festival buzz-machine after enjoying reasonable success at the South Korean box office in May. Still, despite the lack of buzz in the press, the house was packed and fully entertained. Like the main characters, Mr. Kim and Ms. Kim, this film satisfied festival audiences in a more...primitive way, which you just have to see for yourself.

Castaway on the Moon

More about Castaway on the Moon