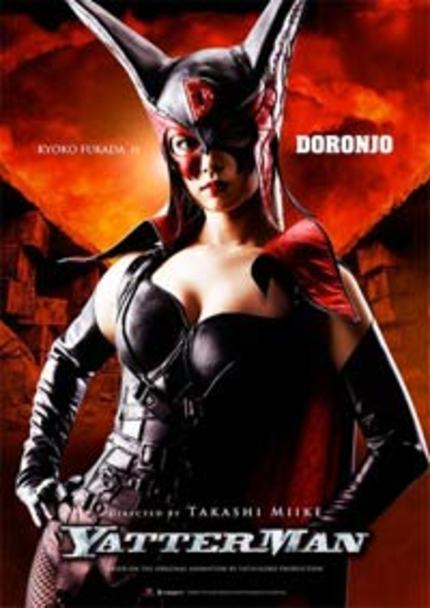 [Our thanks to Lauren Baggett for the following review.]

By now, it goes without saying that Takashi Miike is one of the most successfully versatile directors out there. There is seemingly nothing that this man cannot do. If someone were to tell me that his next film was an intergalactic space ninja rock opera sung entirely in Esperanto, I would believe them AND be right there in the front row on opening night. Some directors would self destruct in self-indulgence when given a huge budget. Takashi Miike just takes things to the next level, and how. In a way, he was the one and only choice when it came to adapting the classic anime YATTERMAN to the screen, and I glad that he's being the wheel of this thrill ride. What results is a candy-colored confection that beats last year's SPEED RACER at its own game.

YATTERMAN is a world where villains spend as much time romping in wedding dresses or singing and dancing with giant wrenches as they do trying to “farewell their foes”. It's a world where our characters rocket to “Ogypt” or the “Western Halps” in mecha shaped like squid or dogs. Silly is the order of the day, and both the children and the grown-up children in the audience were equally delighted at the screening I attended. The story is told with a childlike simplicity, yet it hosts scenes where robots shoot “titty missiles” and hump each other. Somehow, the strange concoction works. The jokes are just raunchy enough to appeal to the adults in the audience, but this is still a pretty child-friendly film.

The plot is negligible, so negligible that it's hardly worth recapping here. The very first scene plops us into the midst of a Yatterman vs. Doronjo Gang battle as if we've just switched the channel during the last ten minutes of an episode, and we're barely allowed up for air over the next few hours. There's a missing father, and a girl in peril, and pieces of a magical artifact that will either destroy the world or cause miracles if reassembled. It's all just an excuse for Yatterman to ride around on their giant robot dog, and that's okay. Plot barely matters as long as we get such delirious scenes as a henchman lolling on top of all the schoolgirls in Japan or tiny fish mecha battling each other. The film's self-referencing is constant but never too cynical, and Miike brings some fresh infusions to the source material without forgetting why the original was so beloved (watch out for a couple of fun cameos during the giant sushi scene).

It's a love letter to anyone who ever eagerly looked forward to watching cartoons “every Saturday at 6:30 pm”. And it's all told with a wink, a smile, and a cheesy victory pose.