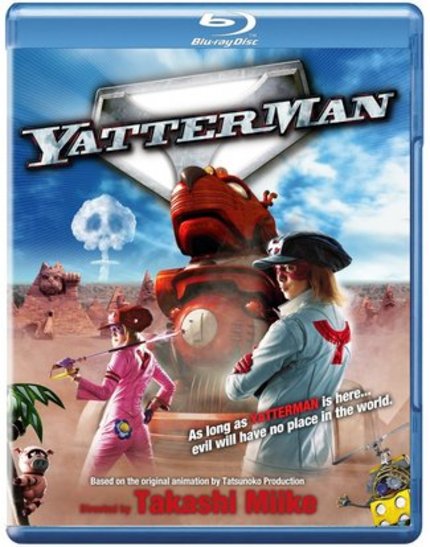 When the first rumors of a live action Yatterman adaptation directed by Takashi Miike started to surface online, we were on top of it. The original anime series was incredibly popular in the '70s and '80s, and it was only a matter of time before someone took on the task of bringing the characters to the big screen. We can count ourselves fortunate as fans of the wild and wacky Miike that he was the one to wrangle this property into one of his most fun features of the last decade.

In an alternate not-so-distant future, the world is in ruins and being terrorized by the Dorombo Gang, led by Lady Doronjo (Kyoko Fukada - Kamikaze Girls), and her henchmen, Tonzra and Boyacky and their inexhaustible supply of gadgets designed for mayhem. Every chaotic step they take toward finding the magical Skull Stone is thwarted by the powerful Yatterman duo, and their own batch of mechas and helpful toys. However, every time Yatterman puts them in their places, the Dorombos come up with a new fool-proof scheme to collect the Skull Stone for their own nefarious means. Every evil action has a hilariously awesome heroic reaction, and the film's two hour runtime is jam-packed with a brand of zany goodness that is uniquely Miike.

Takashi Miike is not historically known for his children's films. Sure, he's got a few in his history, but for every Great Yokai War, there are ten Ley Lines. In the years since his crossover hit, The Great Yokai War, Miike has now made three films purely for children, including these two and the newer Ninja Kids. As much as I love the splattery side of Miike, I must say that he is able to turn that energy and creativity on a dime and refocus his energy on kids' cinema better than anyone. The only contemporary he has in his on screen schizophrenia these days is Robert Rodriguez, who makes Spy Kids films to pay the bills and funnels the proceeds into something like Machete. However, Miike's kids films are, in my opinion, much more successful. Apart from the first Spy Kids film, nothing that Rodriguez has done has even come close to the ambition of Yatterman.

This was a huge undertaking, and Miike pulls it off with aplomb. The idea wasn't to make cartoon characters who exist in a real world, it was to make real people exist in an anime world, and that is something that few films, apart from perhaps the Wachowski Brothers' Speed Racer, have managed to successfully accomplish. The film relies heavily on CG, to be sure, but most of the truly impressive stuff is practical, including the massive Yatter-Woof mecha, which was built at a staggering cost of a quarter of a million dollars for the production. In addition, the film's set and costume design go a long way toward making real the illusion that we are in Yatterman's world, rather than he being in ours.

That being said, there is plenty of reason wacky animation that helps to push some of the gags over the edge, and keeps the film from being too grounded in reality. Most of the action is augmented by computer graphics, and I didn't really mind, which is astonishing to me. It helps to polish the illusion, and I'm okay with that. Miike made the film with the utmost reverence for the anime, even to the extent that he invited the original voice actors in to cameo in a sushi restaurant sequence. His affection for the material and clear vision for what he wanted to see on screen has resulted in one of my new favorite Miike features. Even as he is going for critical acclaim these days with films like 13 Assassins and Ichi-Mei, it's nice to know that while I can't necessarily count on Miike to be wacky every time out, I can certainly always count on him to be himself, which means more surprises for me. Everybody wins!

As part of their growing collection of Japanese contemporary films, Eureka! Entertainment bring Yatterman to Region B Blu-ray in the UK. The film's A/V quality is quite good. With so much CG manipulation, it is hard to say what isn't intentional. It is clear that Miike has color graded much of the film, and those sections look amazing, and the brightly lit scenes also look astonishingly good. There are some times when the action gets moving so fast that it's hard to track it on screen, but that's not a fault of the transfer, I'd call it more of an artistic choice. The audio is similarly good. Eureka! have provided the original Japanese soundtrack in a DTS-HD MA 5.1 mix that is quite solid and takes every opportunity it can get to make things go boom! There is no English dub, but there are very good English subs that can be easily followed.

In terms of extras, what we get is presumably mostly ported over from foreign editions. There are about 15 minutes of behind the scenes footage showing lots of different elements from set dressing to stunt shooting. There are interviews with the two leads, who sadly seem a bit vapid, and Miike, who is cool as a cucumber as usual. My favorite of the bonus features is definitely the nine minute look at costume and set design, which shows they vast amount of effort put into creating Yatterman's world down to the tiniest detail, really fun stuff! There is also the original Japanese teaser, which is loud as Japanese trailers usually are, and the promo materials from the Cannes film market.

Eureka's Blu-ray edition of Yatterman is fantastic, and if you are in the UK/Europe or able to play region B discs, I definitely recommend it. Sadly, no US company picked this one up for distribution, so this will probably be your best chance for a while. Do it!
Tweet Post Submit

Order Yatterman on Region B Blu-ray at Amazon UK