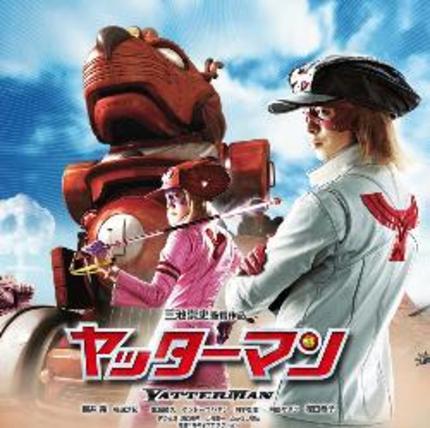 [Our thanks to the mighty and powerful Grady Hendrix for the following review which originally ran with the film's premiere in New York and re-appears now with the screening at Fantastic Fest.]

The economy is on fire. Everyone in America is broke. Jobs are a rumor. The terrorists are winning. But I just saw Yatterman and I'm feeling groovy. A vaccination against The Dark Knight blues, a massive day-glo rail of cocaine that hits your brain like the Accela Express and kick starts your pleasure centers, this flick is far smarter than it has any right to be and it pops the pip all over your popple.

I may not be the best judge of a Miike movie, especially this one. As part of Subway Cinema I helped host the world premiere last night, and as a fan of the director I like my Miike movies in the vein of The Great Yokai War rather than Ichi the Killer (I like Ichi the Killer, but I thought Yokai was pretty amazing). On top of that, I had listened in on dozens of interviews he gave while in town and so I was thoroughly indoctrinated into his point of view before I saw a single shimmering frame of this flick. Proceed with caution.

The original Yatterman was a goofy 70's television anime considered slightly risque and trashy for the times. Every week, toy shop owner, Gan (Sho Sakurai) and his cute assistance Ai battle the evil and incompetent Doronbo gang led by femme fatale Doronjo and her assistants: pig-nosed muscle man Tonzra and rat-faced mecha genius Boyacky. Everyone talks in cute phrases (Toy-Botty ends his sentences with "-botty," while evil Skull Obey ends his with "-obey") and the mecha are nuts: clunky Yatter-wan (or Yatter-woof) is a giant mechanical dog whose powers seem to entirely consist of rolling around very fast, there's a Yatter-panda, a Yatter-pelican. Every week Yatterman and the Doronbo gang battle for piece of the mystical skull stone, every week the Doronbo gang fail (usually due to incompetence), there's a mushroom cloud, Gan and Ai do their Yatterman dance and they all come back the following week to do it all over again.

Miike takes this basic and injects a heaping helping of self-awareness. The Doronbo Gang are tired of getting beaten up every week, Gan is a bit of a dolt, bystanders watch he and Ai break into their Yatterman dance and they shake their heads, muttering, "These people are crazy." Yatter-wan gets beaten up more often than he wins, and mushroom clouds bloom all over the place like there's just been a heavy nuclear rain.

Two things in Yatterman really stand out. The first is the CGI. This is the movie that people tricked themselves into thinking they were watching when they raved about Speed Racer (and at an hour and fifty minutes it's mercifully shorter). Projected in HD, watching Yatterman was like getting Candyland poured in your eyes. Attack sushi, the Funny Bunny Club, Titty Missiles, two mecha getting hot for each other and humping in the middle of a battle, a pile of all the schoolgirls in Japan...Yatterman offers up something shiny, new and nutty in every frame. Miike's idea-cup is more than overflowing - in this flick it's practically a geyser.

The heart of the movie, however, is Doronjo. Played by Kyoko Fukada, the sugar princess from Kamikaze Girls. She's a preening, prancing, pretty pony princess who just loves to be evil because, well, she's a genius. What else is she going to do? You can tell that a million little Japanese boys probably popped their first boner to her animated antics, and Fukada's flesh and blood incarnation of Doronjo will likely unleash a million more, but she also brings adult shading to her cartoon character and maintains her essential humanity no matter what kind of onscreen indignity is being visited upon her.

This flick is kid friendly, but it's a Miike movie through and through, about 10 minutes too long, and with an ending that feels endless. But it's also got the Miike trademark of giving you more "I can't believe I just saw that," moments per minute than any other movie out there today. And I have to confess that I got a little teary at the end. In an interview, Miike talked about the way that Yatterman offered reassurances when it aired only 30 years after the war. He felt like it was a message from adults to kids that everything was going to be alright. No matter how many battles were fought or how many mushroom clouds rose up in the sky, next week things were going to be fine again so don't worry. It's not the end of the world.

By embracing the repetitive nature of the original Yatterman, Miike's telling us that it's the things we do over and over again that are keeping us immature and stop us from growing up, but they're also our protection against a tough old world. That teddy bear you've kept since you were a kid IS childish and immature, but isn't he sort of your best friend, too? Yatterman points out the problems, but also celebrates the comfort they provide. In a world that feels like it's rapidly spinning down the toilet, it's nice to have an adult come in the room and tell all of us that hey, don't worry, no matter what we do everything's going to be just fine.