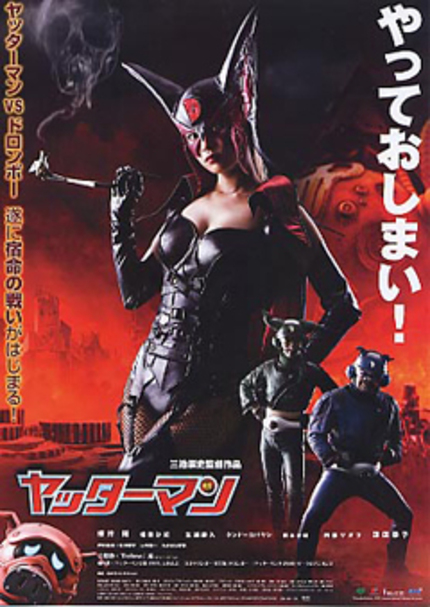 [Takashi Miike's Yatterman kicks off the New York Asian Film Festival in just a couple hours so we take this opportunity to revisit Andrew Mack's earlier review of the film.]

Taking the basic elements of the story and characters of a wacky 70s animated show Japan's most diverse director Takashi Miike combines these elements together with a dash of self awareness and candy coats everything in an array of brilliant colors that won't melt in your hand but will melt in your heart. The sugar rush of goofiness and fun brims to the point of overflowing but Miike has never tasted so delicious and sweet.
Shoko Kaieda's father, Dr. Kaieda, an archeologist, has gone missing searching for pieces of the mystical Skull Stone, that when combined they give great power. Sadao and Saki, the intrepid duo known as Yatterman 1 and 2, agree to help Shoko find her father because as more and more pieces of the Skull Stone are found the more time stands still and things are beginning to disappear around the world once they are outside of time. But Doronjo and here henchmen, Tonzuraa and Boyacky, are also searching for the stones, guided by the mysterious Dokurobe.

Studios need to line up at Miike's door and start handing him more money to bring us a film this delirious and fun at least once a year. I consider Miike with a mighty budget a mighty good thing. The art direction and set design alone earn massive props. Luhrmans and Burtons and directors of such ilk need to understand, anything you can do Miike has shown with this film that he can do it better. With production design from Yuji Hayashida, his own resume includes Casshern, Gaemon, Dai Nipponjin and Crows Zero, there is no wonder why this film looks so freaking fantastic. Rich in color and detail all of the sets boast impressive designs. The world of Yatterman is such a beautiful place to duke it out with giant robots each week.

And for the first time this year I was able to watch giant robots duke it out and understand what the heck I was watching. The CGI in this film is far, far more impressive that I would have imagined and far more comprehensive than Hollywood's greatest offering this past summer. I mean wow. It blended in so well with the sets and backdrops that not once did I think that places like these could not exist. Again, budget means a lot in this film.

The real winners here are the villains. Apart from the fact that they lose 'each week' due to their own incompetence this trio is largely responsible for the success and enjoyment of this film. Admitting that Kendo who plays Tonzuraa is the lesser of the three is okay. Because really it is Katsuhisa who plays Boyacky and Kyoko Fukada who plays the villainous Doronjo who are the real standouts. Boyacky has a thing for Doronjo. Actually, I think any red blooded male would have a thing for Doronjo. I tell no lies when I say that Fukada is certainly not ugly to begin with but to take the original costume and add a fetish feel to it sides with brilliance as she certainly fills it out, what little there is to fill; the rest of it is all her baby. Amazingly though Fukada give her character an unprecedented amount of depth and sophistication. Is it any wonder why anyone would want to wear the white hat and be the good guys when there are villains like this that offer so much more character and memorable moments. Not to take away from Takada and Ai-Chan and their Yatterman roles but they just don't get the meaty roles like their counterparts do?

Overall, I consider this delirious and sugar coated ride a resounding success. It was far more entertaining than I ever thought it would be. The production elements are far more impressive than I could have ever hoped. And while honoring the original source material there is still enough Miike moments and touches to appease the most hardened fans. This is a big win in my opinion and I need to start saving up for a much larger television for when I own this on DVD, and I will own it on DVD, I can watch Yatterman and all its glorious details and colors over and over again.