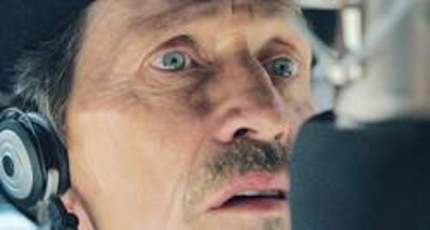 Now that (sadly) Don LaFontaine is narrating trailers for the big guy in heaven, I would like to nominate actor Stephen McHattie as the logical successor to the phrase, "In a World, where..." Bruce McDonald's latest film takes the omnipresent zombie sub-genre and turns it on its ear (literally). Yes, ladies and gents, this is the first 'talk radio' zombie picture, a film in which so little is actually shown on screen, the viewer is left questioning (for much of the films runtime) whether or not the attacks are even real. Violence and intestine pulling gore are replaced with a plethora of science fiction and social ideas which are very much to the pictures benefit. Like Vincenzo Natali's single room sci-fi/horror picture Cube, keeping the visuals to a minimum lets the minds eye soar with the strange questions and possibilities raised here. What communication mechanisms cause raving mobs to spontaneously form? What is the difference between hearing and understanding? Is language itself a virus? Can talk radio save the world or is it really the pestilence? That the titular Pontypool (besides being a small Ontario town, is itself an interesting linguistic confection) wears its brains on its sleeve, in no way makes it less of a thriller, or for that matter, a great actor showcase (McHattie tears up the screen). Bruce McDonald and screenwriter Tony Burgess (from his own novel) inject a surprising amount of playfulness along the way without diminishing the pictures full impact. As genre flicks go, Pontypool is the full package deal.

Morning radio personality Grant Mazzy is having a bad month. His career from Toronto radio personality has been diminished to broadcasting small town radio from the basement of a church; a task he makes bearable by thinly veiled sarcasm and small town mockery. His producer wants him to talk about school closings and traffic hick-ups. He wants drama a controversy. With a three person crew running Pontypool's "The Beacon," there is already a fair bit of tension in the room. The level rises significantly when reports start coming in of some sort of mob attacks. The traffic reporter confirms that there is indeed a mob attacking the local psychiatrists office, and there is much blood and murder on the scene. Not your average day in Pontypool. While Grant, more than a bit of an egotist, at first thinks the locals are playing a practical joke, when calls from the BBC start coming in asking for details (they think it is a French separatist terrorist attack), he begins to believe that he is nearly at ground zero of a major story. Determined to keep broadcasting even when the infected come up to the front door, The Beacon is pretty much the radio broadcast that the characters in every other Zombie flick tune into for a little it of exposition. But what if the language itself is spreading the disease?

When the camera pans across a random desk in The Beacon's recording studio, where a copy of Neal Stephenson's Snow Crash is prominently displayed, that is the clincher. The film is going to bounce a few ideas regarding science and philosophy of communication amongst the zombie apocalypse. A lot of the headier stuff comes from a certain psychiatrist who pops in and out of the radio station, Guerrilla style, not unlike Robert DeNiro in Brazil. Some may see this as a bit of a handicap to the film, but things are as much about babble (note the mangled 'rural Ontario' French) as they are about communication. The mumbled pontifications (pontifications? Pontypool?) of Dr. Mendez, probably a fan of the The Leiden School, who believes that languages are a form of benign parasite in the brain (this being a horror picture, what if they weren't so benign). Seeing someone start to lose their ability to speak, in the form of a babbling breakdown, is as creepy as losing sight, hearing or going numb, and this is milked quite effectively here. As the film runs its course, the balance of engaging ideas, chills, thrills and even laughs make this one of the more effective genre-mashing films (and it is Canadian no less) to come along in a while. Highly recommended.

**Note: When this movie winds its way into the cinema, be sure to stay until the end credits for a fun non-sequitur credit cookie. Something which I am nearly sure takes place in the Metaverse, Neil Stephenson's full-immersion virtual reality world.**