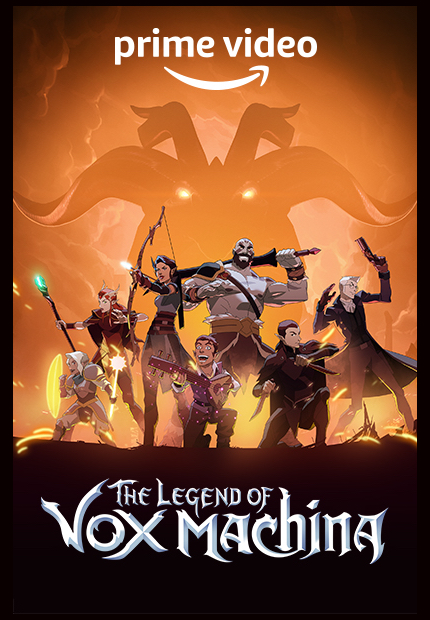 More of the same, which is good news for adults who love nonstop action and vivid violence, seasoned with juvenile humor.

The Legend of Vox Machina
All 12 episodes of Season 1 are now streaming. The first three episodes of Season 2 debut Friday, January 20, 2023, on Prime Video. Three additional episodes will debut weekly, for a total of 12. I've seen all 24 episodes.

Heroes return to a triumphant welcome, only for their homeland to be destroyed by dragons.

Regrouping, they recognize that the four mighty dragons pose a deadly threat to the entire world, and agree that they are the only ones to stop them, somehow. By the end of the first episode, they are off to see about saving the world.

The first season, released last year, established the heroes as a "a winning gang of cheerfully irreverent troublemakers" living in a medieval world where they survived by their wits, whenever they were not otherwise occupied in drinking and fighting. Quickly establishing a rude and crude tone, The Legend of Vox Machina steadily transformed the troublemakers into heroes throughout the course of the season, providing their individual backstories and relationships.

As with last year's run, top-notch animation house Titmouse "ensures that the series features top-notch 2D animation," to quote myself, "which is fitting for a show that takes familiar historical storytelling formulas and freshens them up with modern sensibilities and a brash sense of humor."

Once again, the characters are voiced by Laura Bailey, Taliesin Jaffe, Ashley Johnson, Liam O'Brien, Matthew Mercer, Marisha Ray, Sam Riegel, and Travis Willingham; the actors are co-founders of media company Critical Role, which is where the story originated. Guest voices, some recognizable, add variety and strength to individual episodes.

Watching the show in three-episode bunches is a good strategy. Each episode runs less than 30 minutes, so they can be more easily binged together in a single viewing session. Or, they can be watched over a few days, or whenever you need a colorful punch to your viewing day.

More about The Legend of Vox Machina