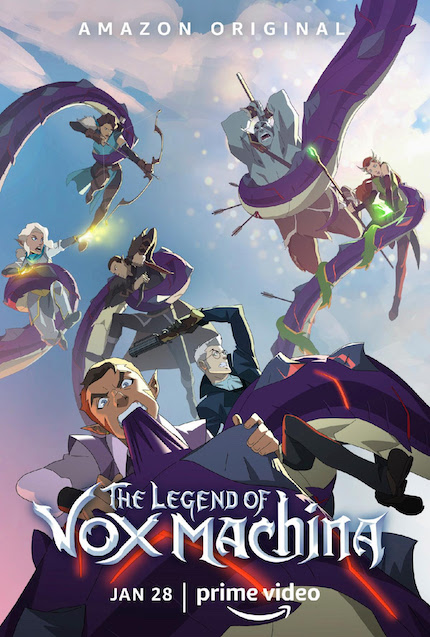 Quickly establishing a rude and crude tone, The Legend of Vox Machina introduces a winning gang of cheerfully irreverent troublemakers, living in a medieval world where they survive by their wits, whenever they are not otherwise occupied in drinking and fighting.

Their intelligence is as varied as their physical sizes and individual talents. Their funds have run low, however, and so they are open to accepting a commission from their region's rulers to vanquish a powerful foe that has been wiping out villages. With a decided focus on the money they will be paid, they set off on their task, which becomes ever more perilous as they slash and slay their way across the dangerous countryside.

Ace animation house Titmouse ensures that the series features top-notch 2D animation, which is fitting for a show that takes familiar historical storytelling formulas and freshens them up with modern sensibilities and a brash sense of humor. Moving like an unleashed jet engine, the jokes pause occasionally to allow for a measure of serious contemplation, resuming immediately afterward with ridiculous silliness on a grand scale.

The humor feels organic to the characters, who are voiced by Laura Bailey, Taliesin Jaffe, Ashley Johnson, Liam O'Brien, Matthew Mercer, Marisha Ray, Sam Riegel, and Travis Willingham. The actors are co-founders of media company Critical Role, which is where the story originated.

The characters are a diverse group who have similar interests and share a boisterous, raunchy sense of humor. Their motivations differ, however, which is one way in which the series branches off from the expected, as the characters discover unexpected aspects of their own personalities, and those of their compatriots.

Even though the series includes many expected genre tropes, such as incidental magic and incredible feats of strength, the action keeps flowing, resulting in a continuous stream. And again, Titmouse provides terrific animation, as they have with so many other projects in the past, which gives the show a very strong foundation on which to build the extended journey into a variety of landscapes and peoples.

The series feels like a bunch of friends got together and decided to sally forth on a grand quest to have fun. They have succeeded, and have created a self-aware world where anyone may join the party. Don't forget your sword.