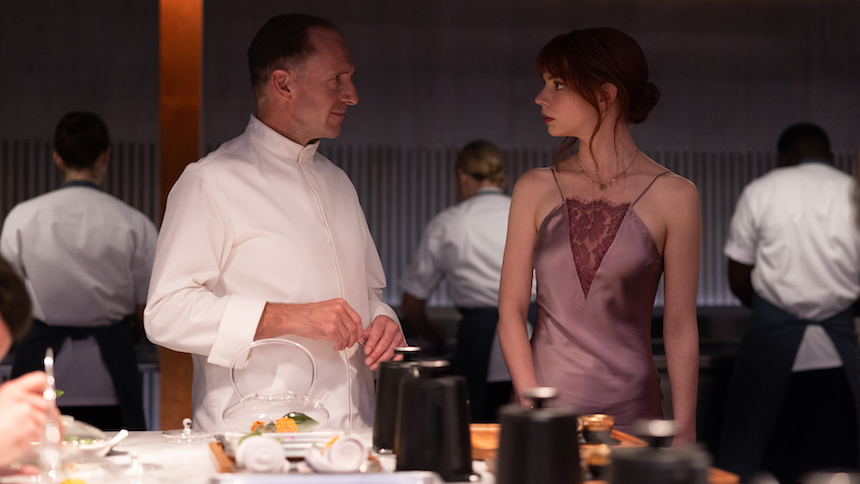 Hungry for social satire? The Menu is pretty palatable.

It follows other recent films pitting the rich against the poor: Ready or Not (2019), The Platform (2019), and Triangle of Sadness (2022) are three examples that do it well. If Ready or Not feels like a lightweight dessert, The Menu feels more like the soup course. It doesn't take the meatier risks of Triangle of Sadness or The Platform, but its expertly-balanced mix of humor and horror make it more than worthy of inclusion at the table.

Set in the world of ultra-exclusive dining experiences, The Menu follows a group of customers headed by yacht to a private-isle dinner party. Among them are minor celebrities, successful young turks, wealthy retirees, food critics and foodies.

If you've never heard the term before, a foodie is a person dedicated to experiencing the best, most cutting-edge cuisine. One such person is the wide-eyed Tyler (Nicholas Hault), whose knowledge of taste experience is matched only by his lack of self-awareness. Both are about to be sorely tested.

Accompanying him is Margot (Anya Taylor-Joy), who does not share his enthusiasm for riche gastronomy. Overseeing everyone's experience is the stone faced Chef (Ralph Fiennes) and his steely eyed assistant Elsa (Hong Chau), who oversee an open kitchen with an army of cooks whose enthusiastic cries of "Yes Chef!" give their traditional white jacket and toque blanche uniforms an almost military air. As if the atmosphere weren't imposing enough, the menu itself has been kept secret, each plating revealed one course at a time to gradually form an elaborate art performance/narrative designed by Chef himself.

But the menu isn't the only secret to be revealed by the end of the night. Writers Seth Reiss and Will Tracy give each of the guests ample reason to be on the receiving end of just desserts. It's a good script. Certainly better than merely workmanlike. But I'm not sure it brings anything new to the ways in which it criticizes it's self-absorbed wealthy characters. The end result comes close to simple, if prettily photographed, schadenfreude.

What lends The Menu a little complexity is the introduction of a character who is offered a chance to choose a side in the class wars and stop hiding behind money, or prestige, or the things one has done to get them.

Chef is a delicious villain, oozing with pained sincerity, whether explaining each dish or its accompanying punishment. Ralph Fiennes manages to keep him interesting all the way to the end by the suggestion that catering to status and unearned privilege has emptied him of his own humanity and sanity. Whenever he speaks, we hope to understand him a bit more.

Hong Chau brings a lean lethality to her portrayal of Elsa, especially when Chef calls upon her to deal with an uninvited guest. Anya Taylor-Joy is simultaneously radiant, fierce and conflicted as she bears witness to the fates of other diners; the movie is just mean enough to make you wonder what will happen to her.

Director Mark Mylod is known almost exclusively for his TV work, though you couldn't tell it from the way The Menu is shot. Whether the frame is filled with elegant shots of food and food preparation, well-choreographed action or startling violence, the moments all feel of a piece. Mylod is smart to lean on his well chosen cast. These are all smart, smart players who are able to keep their characters in the realm of the real as they react to an increasingly threatening and unreal situation.

Will The Menu garner any awards attention? Hard to say. Fiennes is very, very good. The overall production design is too. But if it does, I wonder if it won't be at the expense of Ruben Östlund's Palme d'or winning Triangle of Sadness or Peter Strickland's criminally under seen Flux Gourmet (2022).

That would be a shame. They should all find an audience, not because they offer answers to the problem of growing inequity, but because they show us what can happen if we don't find answers.

The film is now playing in select theaters via Searchlight Pictures.

Do you feel this content is inappropriate or infringes upon your rights? Click here to report it, or see our DMCA policy.
Anya Taylor-JoyMark MylodNicholas HoultRalph FiennesSearchlight PicturesUS

More about The Menu