Review: HALLOWEEN ENDS With A Whimper 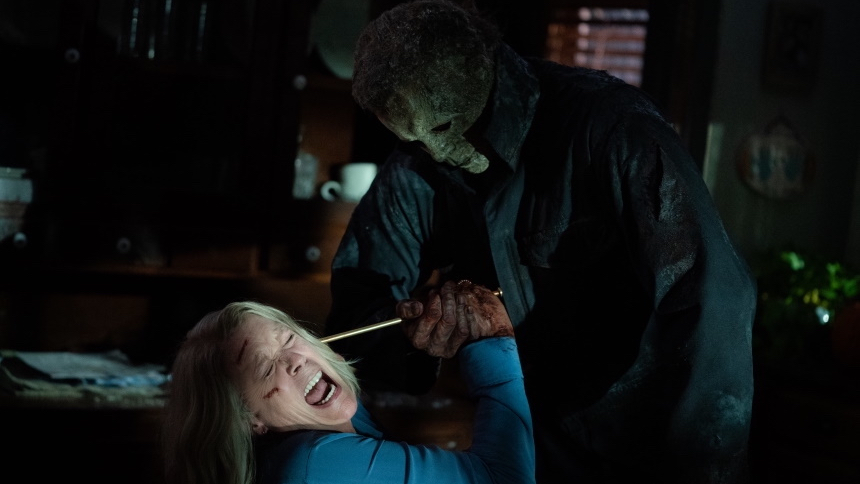 It’s been a long, strange road for Michael Myers and the Halloween franchise. The longest running major slasher franchise is also the most convoluted; with numerous timelines, retcons, reboots, sequels, requels, and false stops & starts littering its very uneven past. Halloween Ends is the latest chapter in this saga and comes as a conclusion for the most recent cycle of Michael Myers stories directed by David Gordon Green (George Washington, Pineapple Express). Critically divisive but commercially successful, the latest Halloween films have been a mix of brutal violence and awkwardly handled thematics that haven’t quite hit the mark, but maybe with this finale he finally nailed it.

Ignoring 35+ years of Halloween lore to create a continuation of the original 1978 story, in 2018 Green and his co-writer Danny McBride have sought to reinvigorate and rejuvenate a franchise that had long since fallen into disrepair. The stories have brought the focus back to Michael Myers (James Jude Courtney/Nick Castle) and his original quarry, Laurie Strode (Jamie Lee Curtis), though the handling of their relationship – such as it is – has been questionable in prior films.

Halloween Ends begins four years after the brutality of 2021’s Halloween Kills, which found Laurie hospital bound for most of the film while Myers hacked and slashed his way through a vigilante mob in Haddonfield. Strode lost her daughter, Karen (Judy Greer), that night and as a result, Ends finds her in a new place, ready to embrace the future and leave behind her painful past. Unfortunately, though she might be ready to move past Michael, he’s not done with her, and he has a partner this time around.

Corey (Rohan Campbell) is a man with a past, a tragic accident involving the death of a child has made him a pariah in Haddonfield, a position that Laurie and her granddaughter Allyson (Andi Matichak) know all too well. A romantic encounter with Allyson gives Corey a ray of hope that is quickly dashed when the town reminds him that he’s still the kid killer they all think he is, which leads to an accidental meeting with Myers, still alive and waiting for his time to shine four years after the mob nearly killed him.

This is where things get sticky. Corey and Myers form some kind of unspoken bond, with the young man suddenly embracing his violent side as a response to the trauma inflicted upon him by a town that cannot forgive. It’s a weird heel turn that doesn’t exactly track for either his character or Myers, but this story takes the wheel for the bulk of Halloween Ends’ run time.

Somewhere around the beginning of the third act, the massacre begins, and this is what the fans pay for. A series of increasingly brutal murders brings Laurie Strode out of her haze, reminding her that there will be no peace while Michael Myers lives. It’s now or never.

Credit where credit is due, Halloween Ends tries for something very different from its predecessors in the current series, but slasher fans will immediately draw comparisons to films like Jason Goes to Hell or even the much-maligned Friday the 13th: A New Beginning, so it’s hardly unexplored territory. The problem is that it strays so far from the story Green has been telling for the last four years that it all comes out of nowhere and the additional villain serves no narrative purpose.

Jamie Lee Curtis gives her all in what she promises to be her final performance in the role that made her a star, but an actor can only do the best with what their given, and what she’s given isn’t great. Green made the odd choice to bookend the film with voiceover from Strode, as though this entire film exists in flashback. She’s speaking from a written memoir, which gives the voiceover an overly flowery tone that doesn’t quite fit the film. On top of that, she largely speaks in grand declarations and clichés, which Curtis sells, but I’m not sure who’s buying.

The rest of the cast does largely serviceable work, this isn’t a subtle film. Campbell and Matichak as the main supporting cast do a fine job, though Campbell’s Rohan is about as subtle as a ton of bricks when the character starts to break. The eccentric cast of bit players really ham it up, from the lecherous Doctor Mathis (Michael O’Leary), to the pissed off local DJ, Willy the Kid (Keraun Harris), there are some fun moments with the small characters that really lighten an otherwise oppressively dour mood.

I suppose the question on a lot of fans’ minds might be, is this it? Does Halloween really end? In the grand scheme of things, probably not, but in terms of this overarching story, it seems like a safe bet. The film concludes with an overwrought sequence attempting to prove to the audience that it has, indeed, ended. My theater burst into a mixture of laughter and cheers at the spectacle of it all, and I feel like that’s going to be a common response across the spectrum of Halloween fans.

Green definitely could’ve played it safe and made Halloween Ends a more intimate affair, the simple story of Laurie and Michael and their final showdown, so he at least deserves some respect for doing something unexpected. However, the film doesn’t support his ambitions with sloppy writing, questionable plotting, and at least twenty minutes of unnecessary fluff that should’ve been trimmed. While it definitely outshines the abysmal Halloween Kills, it’s far from successful in fulfilling its own ambitions. This Halloween Ends with a whimper, rather than a bang.