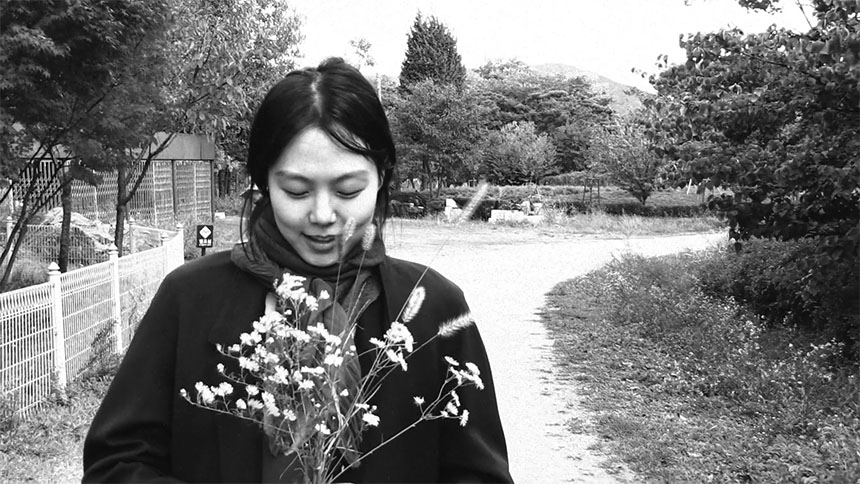 In Hong Song-soo's latest, The Novelist's Film, the conversations revolve around a period of creative stagnation among artists. And it unfolds how chance meetings could break such a dry spell and give everyone involved a new direction.

Junhee (Lee Hae-young of In Front of Your Face), a novelist in her slump, visits her old writer friend who fled Seoul and set up a bookshop in the suburb. She is salty about her friend's sudden disappearance and not contacting her. But they make up and Junhee is dropped off to a tall building nearby, which seems to be a local attraction, equipped with an observation deck where one can see stretches of the Han River and a nearby park.

There she meets a film director Park (Kwon Hae-hyo) and his wife. Awkward pleasantries suggest that they have some histories together. Looking down at the river park, they decide to drive down to the park to have a walk. In the park, it is revealed that their project, an adaptation of Junhee's book, fell apart.

Then they run into an actress Gilsoo (Kim Min-hee) who is contemplating quitting her profession. Park laments about the loss of a talent and wasted potential and Junhee vehemently defends Gilsoo's decision about her career.

After the director and his wife leave embarrassed, the novelist and the actress hit it off. With Gilsoo's film school student nephew joining in, they concoct a short film project that Junhee wants to make, if Gilsoo and her artist husband agree to be in it.

By another chance, Gilsoo takes Junhee to her friend who is in need of help. Her friend turns out to be the bookshop owner. There, in the small corner of the bookshop, five people are crammed in to talk and drink copious amount of makgeoli (Korean rice wine). Junhee stopped writing because she found her words felt like exaggerating, as if she had to find meaning in each word she writes.

So goes another meta auto fiction of Hong as he reveals a sliver of his filmmaking process; the 'compulsion' to make films in the director's earlier days are gone, giving way to stagnation, brought on by success, relative comfort and getting old.

Story isn't as important. It can be as simple as something from the real life. Inspirations and directions can't be forced and life provides them in unexpected ways. But as the director has always done by reflecting life with actors and script, he gives it a distance from himself, and by not putting any extra weight of what it all means. It doesn't have to be a documentary to be 'truthful,' nor does it need to be metaphoric and imbued with 'meaning.'

With his consistent output, Hong's metaverse has become as comfortable as home for his fans. Watching his films is like meeting and conversing with an old friend now: they know you, you know them.

But also, you start noticing small things, a delicate story within a story and small nuances in characters that you find pleasurable. I find the bookshop owner's cutting all her ties in Seoul and 'starting over' in anonymity in some other town is an added bonus.

The beginning of the film where we hear off-screen her berating her younger employee contrasts with Gilsoo's description of her as a good natured woman, giving a more complex pictures of the character. The younger employee, played by Introduction's Park Mi-so, who played a young student lover, reveals that she is (despite her looks) 33, indicating that all these characters are grownups and no one can be told about what they need to be doing with their lives (and by extension Hong's both artistic and private life).

There is a little girl staring through the restaurant's window while Gilsoo and Junhee eat lunch. Maybe she is staring at Gilsoo because she is a famous actress. Gilsoo excuses herself and goes out to talk to the little girl. We don't hear it, but she talks to the girl a long while, all captured in one take. Loved the poet (Ki Joo-bong) not remembering an unwelcome story he wanted to tell while drunk. These are all delicious.

The Novelist's Film ends with Gilsoo watching the novelist's film. The film within a film, just like the rest of the film shot in high contrast black and white, consists most of the time of Gilsoo looking directly at the camera, thus breaking the forth wall. The last spurts of color at the end give a jolt, as if it is revealed that we are watching something real, private, and true.

Prolific as ever, Hong is not stagnating, for sure. But I guess with the pandemic, it crossed his mind. I hope his compulsion never stops.

Do you feel this content is inappropriate or infringes upon your rights? Click here to report it, or see our DMCA policy.
Hong Sang-sooKim Min-heeKoreaNew York Film FestivalNYFF 2022The Novelist's FilmLee Hye-yeongSeo YounghwaDrama