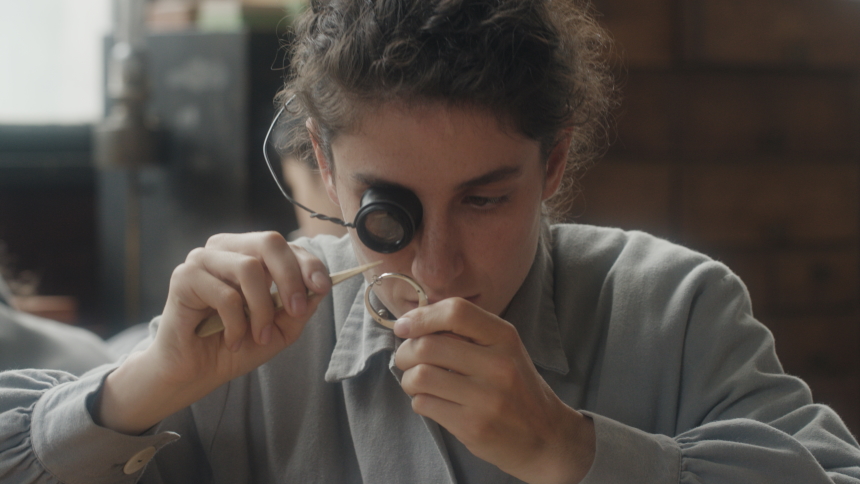 A man with one watch always knows what time it is. A man with two watches is never sure. Cyril Schäublin’s deep dive into nineteenth century Swiss watchmaking, the business and the labour, alongside the nascent political movement that was brewing in the Canton of Bern at the time, is perhaps the strangest historical biopic that I have ever encountered.

It opens with aristocratic Russian women gossiping on the whereabouts of one Pyotr Alexeyevich Kropotkin, philosopher, cartographer, and labour activist. They primp and pose, over glasses of wine and fresh air, for a new and novel technology: Photography. The camera is distant, the mood unhurried.

This will be the signature visual motif, as well as the pacing, as the ‘action’ moves to a valley in Switzerland, its small town dominated by a watchmaking factory. It too is being photographed. It's for a sales catalog, for which the two local gendarmes will remind just about everyone, including Kropotkin upon his arrival, to politely move aside, out of the frame as it were, to make room for the business of business, and the technology of technology. In that act, the film is explaining how the film is going to be.

The village itself appears bucolic and sleepy, particularly given Schäublin’s unusual and oblique visual framing. People are dwarfed by architecture and landscape, often relegated to a far corner of the screen and partially obscured behind buildings or forest. The audio is not specific either, and it is up to you, the viewer, to focus your attention, or process the visual and audio grammar of the film. This is not a style for everyone, but it is intoxicating to those who love a good avant garde narrative.

Kropotkin is there to make a detailed map of the valley according to how the people have actually named things, not how the government has dictated them to be. He calls this an "anarchist map of the world," however, the anarchist movement, the valley, and the workers themselves (not to mention the filmmakers) pull things into a far wider context than simply one man in one place in history.

The title of the film, Unrest, is a clever play on words. It is the name of the tiny, calibrated balance wheel of a watch, a tiny springy pendulum which beats like a heart, pulled back and forth by the rest of the machine. It is also, figuratively, what was going on all over Europe at the time. There is a beehive of politics, Socioanarchist politics, at work in the watch factory. The workers vote to shift their own money to various labour causes around the world, from Baltimore to Bucharest.

The employees (and the owner) seem to have precious little time for their own lives. The management are men, the workers are women, profit is precarious, and external pressures are fierce. Work seems to be only thing that exists in life here -- a capitalist ‘victory’ at the cost of humanity. Boxes of matches with secret messages are being exchanged by various political operatives on cigarette breaks or buying portraits from a photograph merchant. What could possibly go wrong?

Josephine, who calibrates the unrest wheel by adjusting and assembling the hair-spring, is at the heart of things, perhaps the more important figure (or what she represents) in Kropotkin's own story. She is rigorously timed by her bosses on how many unrest wheels she can assemble (it is delicate and finicky work) in an hour.

Management is obsessed with timing everything, including the paths workers walk through the factory, and across the grounds. The obsession becomes downright pathological, given the factory has dictated its own way to set the time. Factory time is at odds with the official Municipal time of the town. But then there is also the Telegraph time and the Railway time.

None of these systems are well meshed. Mistakes are costly and bureaucracy is often punitive. You can guess where the expression about multiple watches came from.

In nineteenth century, as in now, the advance technology and information is the driver of politics and political systems. Human productivity is captured, measured and tweaked. The effect is one of reducing people to little cogs in the machine.  Not unlike the many tiny parts that are assembled in a mechanical watch. Watchmaker meet Amazon warehouse employee or Uber driver!

Filmed with predominantly non-actors going about their tasks, Unrest is a marvelous look at a craft, watchmaking, one that is seldom put up on screen. It is done with a keen eye for photography, and an unusual way to tell a story. Unrest is a wholly original tribute to the hundreds of workers (including the writer-director Cyril Schäublin’s grandmother, and extended family) who toiled under challenging, repetitive micro-tasks to make time pieces so the world could become globally in sync.

If history is a series of tiny events, and the mechanics of the watch are also thus, a series of events to form an expression of time, then is society the tightly-wound mainspring? The stress which is only allowed to escape, slowly, due to all of the constraints of the machine, or the forces will fling the whole mechanism apart. Will Pyotr finish his map, in spite of all the cinematic obstacles in the valley of Horology? Will Josephine and Pyotr find love in the moments between hours?

Do you feel this content is inappropriate or infringes upon your rights? Click here to report it, or see our DMCA policy.
Alexei EvstratovBerlinClara GostynskiCyril SchäublinFramingPhotographySwizerlandTechnologyTelegraphTorontoUnrestWatchmakingWavelengthsValentin MerzNikolai BosshardtDramaHistory