Rose Byrne returns for more of the same, only different, in a new season, debuting globally on Apple TV+. 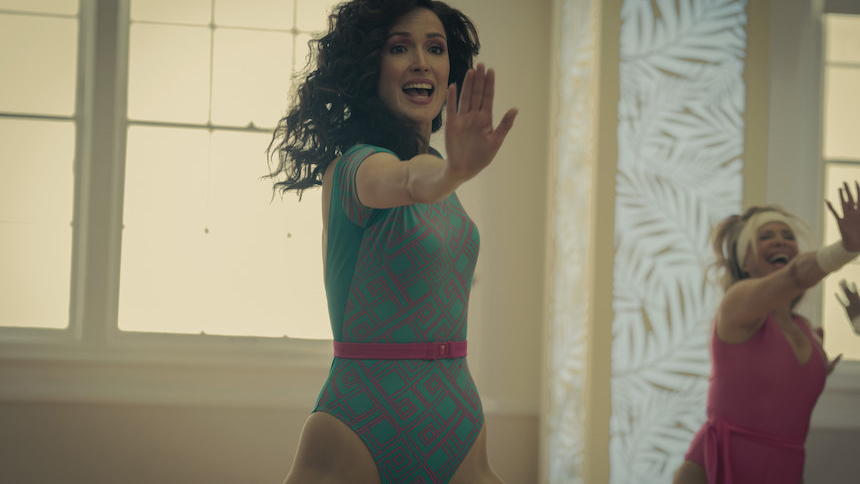 Listen up! Your body is talking to you.

Daily exercise can strengthen the physical body by loosening and tightening muscles, while also relaxing and focusing thoughts for today and, indeed, the future.

The latter is what makes things so challenging for Sheila (Rose Byrne) as the second season of Physical launches. She wants to make dramatic changes in her life, starting with her exasperating husband, Danny (Rory Scovel). What is she to do when her formerly clueless partner finally finds a clue?

Acknowledging (some of) his faults and accepting (some of) his responsibility, he encourages Sheila on her path to becoming a breakout exercise guru, which is where the first season left off, with Sheila scoring a deal to debut on videocassette. (Hey, it was 1982! That was a big deal back then.)

Sheila is surprised by Danny's sudden turn in personality. (So was I.) She continues to carry on with a staunchly Morman businessman John Breem (Paul Sparks), while also dealing with her own addiction, making up with her close friend Greta (Deidre Friel).

Last year, I was quite taken with the first season, even writing: "The rich cast of supporting characters add multiple distinctive flavors, all drawing upon the type of people who lived in Southern California in the early 1980s -- to which I can personally testify -- and I would love to know and watch more about each and every one of them." Now that I've gotten my wish, I wonder why I wished it in the first place.

The second season finds each of the characters being examined in greater detail, to the point of exhaustion and the emptying of personal interest. Why did I fall in love with this group of nitwits in the first place?

Ah, but then series creator Annie Weisman's plan is clarified, which is why it's extremely beneficial to watch a series -- or, at least, one full season -- before drawing any conclusions. Sheila's character arc, which can be quite frustrating to experience at times, is put into the larger perspective of her addiction, and how it affects how she views and reacts to people and events.

Directed by Stephanie Laing, the series sometimes resorts to visual tics that, again, can be irritating at times, but are tied to what the protagonist (Sheila) is experiencing and how she views the world and her place in it. It's worth the investment of time over the season for what it reveals about Sheila and the great challenges of living in that period of time in that place in a male-dominated culture that has been, and is still, extremely slow to change.

Do you feel this content is inappropriate or infringes upon your rights? Click here to report it, or see our DMCA policy.
Annie WeismanApple TV+Paul SparksRose ByrneUS