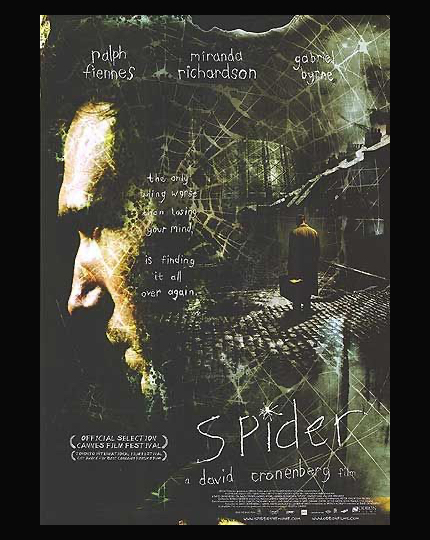 David Cronenberg began a new century quietly, appearing in Jason X (aka, Jason Goes to Space) and then settling down to make a new film in England.

Spider (2002)
The film is available to buy or rent from a variety of VOD platforms in Canada, though not the U.S. It is available on Region 1 DVD from Amazon.

Ralph Fiennes stars as the titular character, released from a mental ward and residing in a halfway house in London, where he struggles with memories of his parents (Miranda Richardson, Gabriel Byrne). Patrick McGrath adapted his own novel, first published in 1990.

Premiering at the 2002 Cannes Film Festival, I remember sitting down to watch it with some degree of excitement at AFI Fest in Los Angeles later that year, and promptly falling asleep, which says more about my late-night stamina and nothing at all about Cronenberg's artistry. What remains intact in my memory banks, though, are the webs cast during the opening credits, and the bleak palette that Cronenberg painted upon.

It received "universal acclaim," per Metacritic, from critics who did stay awake -- and riveted -- so I'd love to watch it again sometime.

A History of Violence (2005)
The film is available to buy or rent from a variety of VOD platforms. It is also available on Blu-ray from Warner Bros. through a variety of retailers.

David Cronenberg's filmmaking skills amplify and deepen themes of identity that have long fascinated him. As is often the case in his films, the mood is dark and the tone is compelling. It's like being served an elegantly prepared 12-course meal at a swift pace, barely allowing time to consume each course before the next arrives, yet the cumulative effect is entirely satisfying. And it takes a long time to digest fully.

Eastern Promises (2007)
The film is available to buy or rent from a variety of VOD platforms. It is also available on 4K and on Blu-ray from Kino Lorber.

So you think you're a tough guy? Are you willing to strip down and go mano-a-mano with naked Viggo Mortensen in a steam bath?

The film's screening at the Toronto International Film Festival in 2007 prompted Michael Guillen to write, in part:

"Delivers all it promises. Mortensen, as Nikolai Luzhin, maneuvers a mesmerizing dance between suave veneer and ruthless interiority and his performance in the bathhouse scene--which will be the scene everyone will be talking about--is downright brave and committed. All the performances are solid, each textured with moral ambiguities, that both distance and engage the audience simultaneously."

Come back tomorrow for a look at the last decade in David Cronenberg's ongoing career. 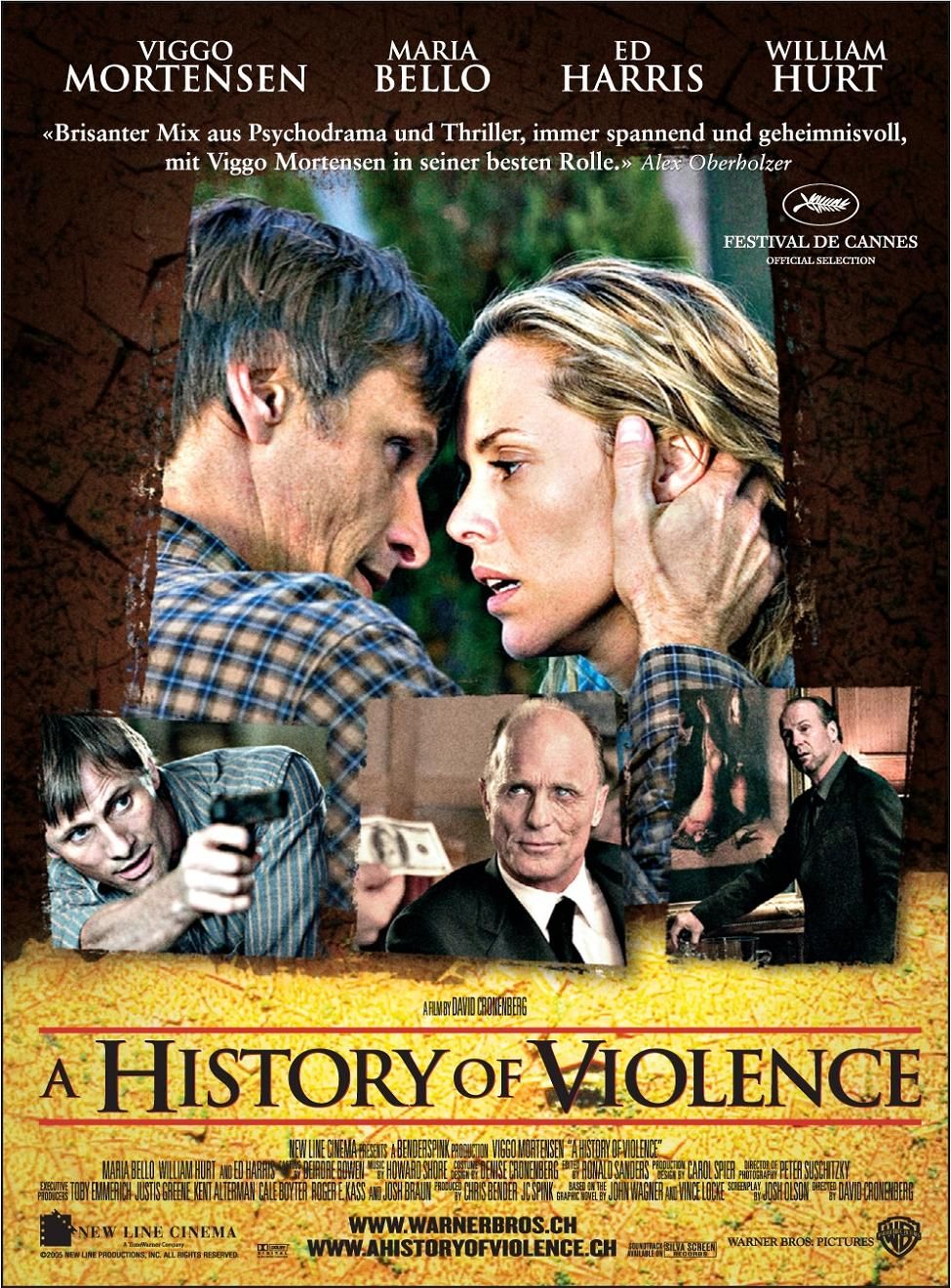 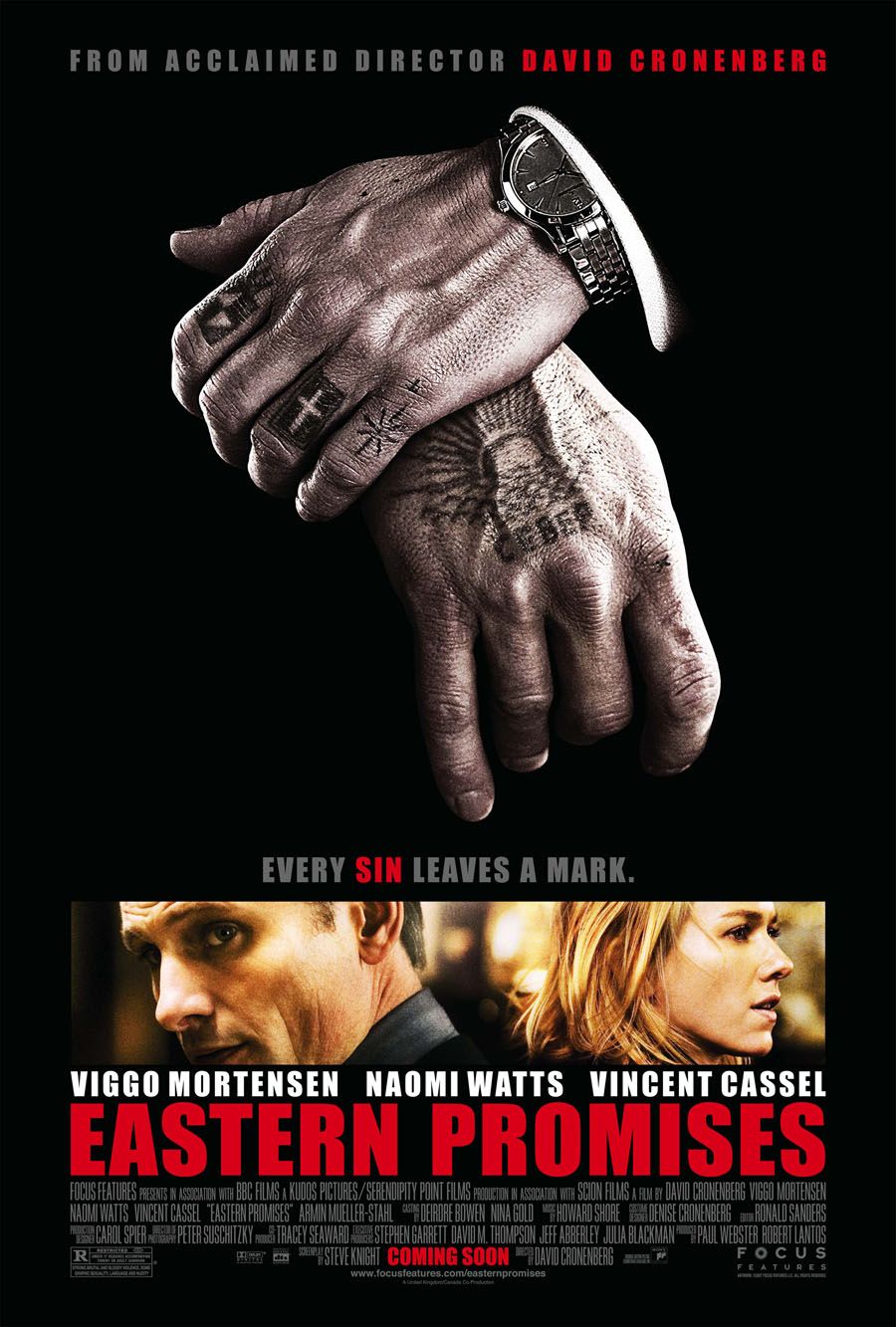