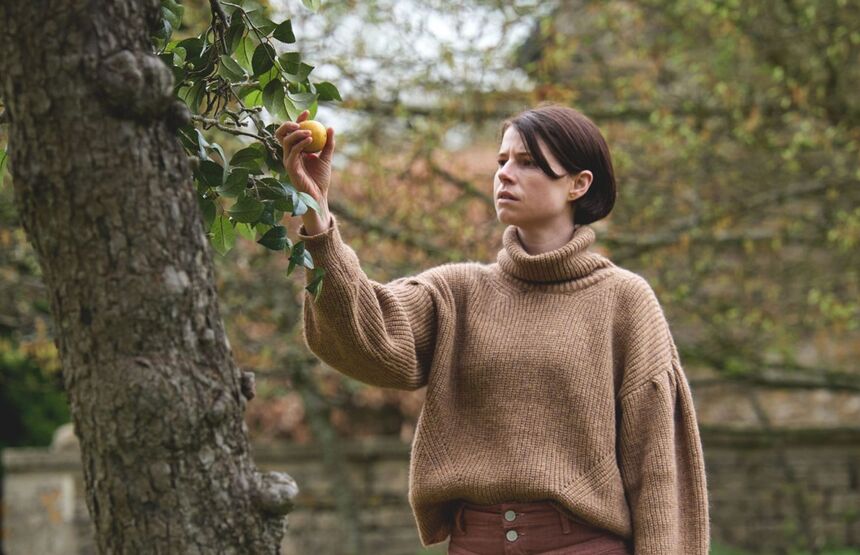 A darling of the independent film circuit, Alex Garland’s latest mindfuck is his most confounding and inscrutable work yet. While Men is bound to spark conversations about male violence, toxic masculinity, and the fragile male ego from a large sector of the audience; another – probably equal – sector will likely walk out of the theater far more confused than they’d care to admit. More metaphor than movie, Men also marks a likely zenith in studio A24’s commitment to the fringes of popular cinema, which is not something I say lightly. It’s a challenge, and some of us like a challenge; but Men revels in its deliberate obtuseness in a way that feels condescending.

Harper (Jessie Buckley) is a woman fresh from a long-term relationship that ended tragically. Irrevocable words and actions have left her in need of healing. A holiday in the English countryside away from her big city stresses and memories seems to be just the ticket to getting back to her real self, but this is a horror film, and it won’t be that simple.

The caretaker of the estate, Geoffrey (Rory Kinnear, Quantum of Solace), seems a bit quirky, but only in the way that we might expect a person who’s lived his whole life in the English countryside would be. He gets her settled in and goes along on his way. Or so we think, Geoffrey is more omnipresent than we understand him to be at first, and it’s only going to get creepier.

When Harper decides to take a walk in the woods, she stumbles upon a menacing figure in the distance moving slowly toward her. Not one to tempt the fates, she turns around and heads back, only to discover that the man, stark naked and covered in wounds, has followed her and is trying to get inside. She calls the police, who come by to apprehend him and take him away, but her troubles are just beginning.

This is where the film takes a serious shift. Narratively, any kind of linear storyline ends here, everything that happens from this point forward is completely open to interpretation, but all roads lead to the idea that men are bad and want to kill you.

I’m not saying that to demean or belittle the idea that this is a fear that most women contend with on some level in their lives. Quite the opposite, the film’s chaotic violence and anarchy is an outward expression of Harper’s inward torment about her responsibility or culpability in the events that ended her relationship. But that’s just one event, Harper’s subsequent interactions with men in this backwater seem to confirm that she’s some kind of shrew for not immediately kowtowing to their every ego-driven whim, and because she stands up for herself, she’s some kind of witch.

By the end of the film, Garland attempts to beat the audience to death with the blunt force of his increasingly gruesome metaphor. Men with battered egos become battered, ungodly heaps of torn flesh seeking retribution, terrorizing her with their demands that she somehow fix the pain they’ve inflicted upon themselves. Garland illustrates this cycle of broken men with broken egos in a tour de force sequence of body horror birth, death, and rebirth, but by the time it all comes together at the very end, the film has made an incredible mess of its thesis, effectively rendering it weightless.

More muddling than menacing, Men may be effective in delivering its message – presumably that all men are dangerous, as in this film, they all are – but as a narrative film it’s a damp squib. Inscrutable by design, Men revels in misdirection and metaphor, but never builds the narrative structure to hold any of its many ideas together. Perhaps its descent into nightmare logic would’ve been more effective as an interlude, rather than the entire final third of the film. In any case, Men is a mess, as men often are, so maybe that’s a metaphor in itself? Who even knows.