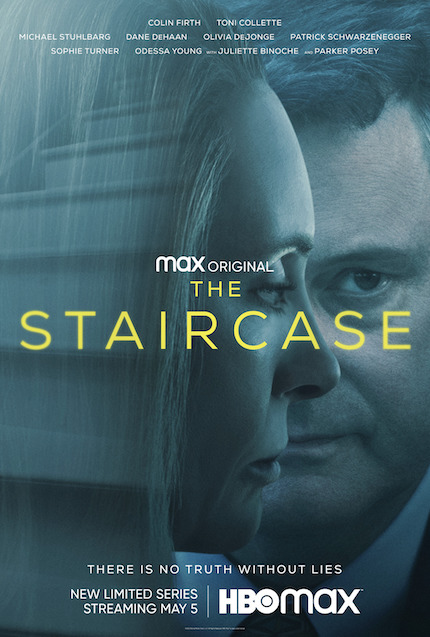 I feel like my head is going to explode.

The Staircase
The first three episodes are now streaming on HBO Max. Subsequent episodes in the 8-episode series will debut every Thursday.

What appears to be a very loving and intimately supportive family slowly comes apart over the first three episodes of director Antonio Campos' dramatization of a true-crime case.

Campos, who made the abrasively rough Afterschool (2008) and Simon Killer before helming the unconventional bio-drama Christine (2016), then turning his hand to episodic television, created The Staircase, inspired by the same-titled documentary series, directed by Jean-Xavier de Lestrade, which was first broadcast in 2004; Campos wrote the first and third episodes, and directs all three.

The case began in December 2001, when Kathleen Peterson (Toni Collette) was reported dead by her husband Michael Peterson (Colin Firth) at the bottom of a staircase in their large home in Durham, North Carolina, in the southern U.S. It isn't long, though, that the police suspect foul play, and soon Michael is charged with first-degree murder, even as he declares his innocence and gathers his family members ever closer.

Director Campos' measured pace rarely looks away from the bloody, grisly details of the case, sometimes swirling together events from the three months leading up to Kathleen's death and events that transpired afterward. It's always easy to follow, though never particularly easy to watch, due in large part to the authentic dramatic performances.

Colin Firth and Toni Collette establish likable personas for their characters, which makes what happens more devastating. Equally fine turns are given by Michael Stahlberg as Michael's attorney; Olivia DeJonge, Sophie Turner and Odessa Young as the daughters; Patrick Schwartzenegger, Tim Guinee and Dane DeHaan as the sons; and Rosemarie DeWitt as one of Kathleen's sisters. The entire cast excels, however, at pitching their emotions to match the moment that is being depicted.

The Peterson case is one that I only vaguely remember reading about at the time, and I have no idea how closely (or not) the series sticks to the known facts and characterization. I can, though, speak to the emotional truth felt by an outside observer, and it's quite disturbing. 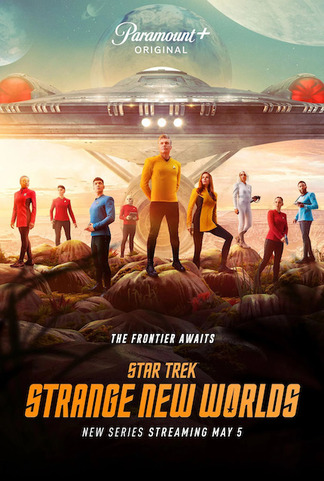 Star Trek: Strange New Worlds
The first episode is now streaming on Paramount Plus. Subsequent episodes in the 10-episode series will debut every Thursday.

On a much lighter note, count me among those who were not particularly excited by the prospect of yet another series inspired by the original Star Trek series more than 50 years ago. I mean, c'mon people, get a life!

I confess that part of my apathy is due to the presence of Akiva Goldsman as co-creator of the series (along with Alex Kurtzman and Jenny Lumet) and writer/director of the first episode. I've run hot and cold on Goldsman, who has his hand in seemingly every major franchise of the 21st century; his work often bows too deeply to broad, mainstream instincts.

To be fair, I was pleasantly surprised. Captain Christopher Pike, a character who dates back to the original pilot for the original series, and was introduced into the "new" Star Trek universe in the person of Anson Mount in Star Trek: Discovery (aka the first of the rebooted series now streaming on Paramount Plus), makes a reluctant re-entry as the star of own series. His reluctance quickly melts away as he becomes involved in leading the classic spaceship Enterprise on a new mission to, you guessed it, a strange new world.

Filled with fanservice callbacks to the original series, the new show nonetheless displays the good sense to acknowledge Star Trek's past while endeavoring to inch things forward, once again showcasing a diverse cast that includes people from different races, cultures, and planets. Different than the other series, Star Trek: Strange New Worlds is more concerned with the near-future (or at least a bit closer to our present) and appears to be intended as an episodic series, rather than one that plays like an endless limited series, like Star Trek: Discovery has become over the course of its four seasons.

Both Star Trek: Discovery and Star Trek: Picard have often been consumed with imagining cultural, engineering, and scientific achievements of the far future. After just one episode, it's impossible to say how, exactly, Star Trek: Strange New Worlds will develop, but its title carries with it the implicit promise that it will give priority to new and different civilizations, and do it all with a bit of light-hearted fun to leaven the expected moral lessons.

Do you feel this content is inappropriate or infringes upon your rights? Click here to report it, or see our DMCA policy.
Akiva GoldsmanAntonio CamposHBO MaxParamount PlusUS