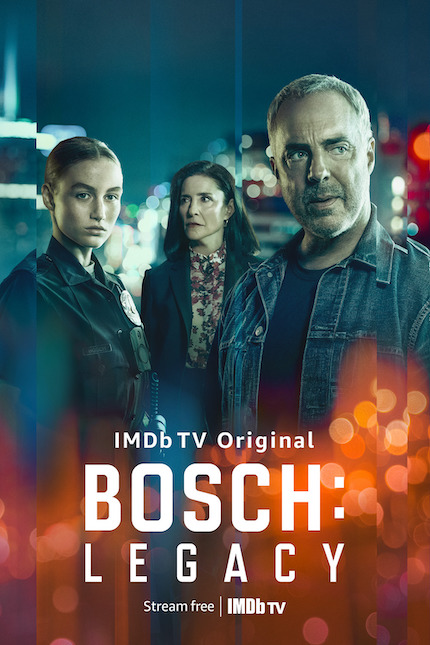 Some things get better with age.

Still crotchety after all these years, Harry Bosch continues to roam the back alleys and byways of Los Angeles, seeking out justice.

Having retired from the Los Angeles Police Department after 26 years of service on a sour note, Bosch (Titus Williver) promptly applied for a license as a private investigator, even as his daughter Maddie * (Madison Lintz) submitted her application to the police academy. After seven years on Prime Video, death knells were sounding for what was billed as the final season of the series.

But wait! The show has been reborn under a new title but with the same estimable showrunner, Eric Overmyer (The Wire, Treme, and other quality shows), as well as author Michael Connelly on board as a writer and executive producer. Zetna Fuentes, who has directed a large number of quality episodic shows, is also an executive producer and directs the first episode.

The season begins with the recently-graduated Maggie learning hard lessons, early in her mandatory one-year training period. Bosch continues to bend rules in pursuit of his own sense of justice as a private eye, now in the company of the younger, somewhat more mellow Mo (Stephen A. Chang). He's also in league this year with Honey Chandler (Mimi Rogers), a defense attorney who served as a mentor to Maggie and now works for a small law firm headed by the civic rights-minded Marty (David Moses).

What I've loved watching over the years is the continuing development of Bosch and Maggie as independent characters who generally agree -- but not always. When father and daughter differ, their motivations, reasoning and justification for their conduct makes perfect sense for their character, even if that causes them to clash with each other (occasionally) or with other people (frequently).

The character-driven developments and the recognition that each is at a different point on their life course means that the show has a broader palette to paint upon. Freed from his onerous superiors, Bosch must redefine his own personal boundaries of conduct. Maggie, on the other hand, must face up to people in positions of power over her conduct, which causes her to chafe as she learns how to live with superior officers who do not always jibe in their decisions and commands with her personal sense of justice.

Their differing relationships to Honey shines a different light. Honey is a victim of a gun shooting that almost took her life and she must deal with the still-reverberating echoes of injustice that tempt her toward a profound desire for revenge. The three primary character threads bleed into three primary narrative threads, which all revolve around the eternal quest for justice.

Titus Welliver nailed his character in the first season and continues to discover new notes to play. Like her character, Madison Lintz has grown into a fine young actress, convincingly capturing her highs and lows. And it's a pleasure to watch Mimi Rogers essay someone with recognizable strengths and weaknesses.

I've watched the first four episodes in advance via a private streaming link that was provided to me without ad breaks. The show will be available on the ad-supported Freeverse streaming service, formerly IMDB.tv.

Each episode has been designed to build up to an ad break every 12-15 minutes or so, so it's a smooth transition that doesn't unduly break the narrative flow. If that's how the show will be presented on Freevee, it'll be in the style of broadcast television back in the days before ad breaks started popping up every 5-6 minutes.

That's a good model for any FAST (Free Ad Supported Television) streaming service. And Bosch: Legacy is a good show that should keep going.