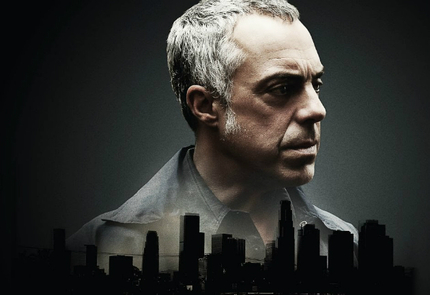 Harry Bosch is a collision waiting to happen.

As essayed by Titus Welliver in the first 10 episodes of Bosch, a new series that debuted in its entirety on Amazon.com over the weekend, the titular character is a Los Angeles police detective with some 25 years of experience under his belt. That means he performed his initial years of law-enforcement service under a different regime -- i.e. before Rodney King, for those familiar with that dark era of U.S. history -- and still retains an odor of brutality in his work. (The series is adapted from a still-running series of books by Michael Connelly, first published in 1992, which suggests the series has been jury-rigged a bit from its origin stories.)

He's shoved the "punch first, ask questions later" inclination down under his skin, where it continues to fester under multiple layers of tight-lipped courtesy. He'd rather do things as he was taught, but he's adapted with the times to the best of his ability. For one thing, he's too driven to put away bad guys to give up on his chosen profession. For another, what else would he do with his time? His marriage couldn't stand up to the strain of neglect, and his 14-year-old daughter now calls him "Harry," making a statement about his continued distance rather than expressing any childish petulance.

The first episode, directed by Jim McKay, sets up the basic story threads, characters, and locations. (The opening sequence moves swiftly from Dodger Stadium to Angels Flight to the Metro.) Harry is immediately embroiled in a possibly questionable shooting in a dark alley ... in the rain ... at night. His superiors, Capt. Harvey Pounds (Mark Derwin) and Asst. Police Commissioner Irvin Irving (Lance Reddick), are not happy. But his partner, Jerry Edgar (Jamie Hector), remains steadfastly loyal and supportive, and another superior, Lt. Grace Billets (Amy Aquino), is tough but fair.

Working on the weekend to relieve tension -- yeah, right! -- Bosch uncovers the body of a child, long-believed missing, and the next episode introduces Raynard Waits (Jason Gedrick), a wily criminal who becomes the chief antagonist of the season. Those two cases are the initial linchpins for the show, allowing for generous development of the characters. 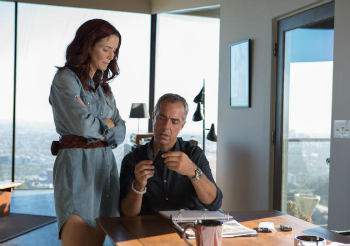 Certain concessions are made to the fantasy of on-screen detectives; most improbably, Harry lives in a luxurious hillside house with a panoramic view of the Los Angeles basin, which he supposedly purchased with the sale of movie rights to one of his past cases. Oh-kay. Putting that aside, the series is more concerned with the ins and outs of everyday investigations, searching for clues and slowly building a case, than with the flash-and-bang of most action thrillers.

That's not to say the series lacks suspenseful sequences or is entirely bereft of hair-raising moments. But it lends itself to armchair detectives who are willing to soak in the evidence and draw conclusions, which are not always readily apparent.

Bosch is a very good detective, yet he's not some mad genius. Titus Welliver carries a calm demeanor that is liable to erupt at any moment; the longer he exercises self-control, the more apt he becomes to explode in unchecked anger. He doesn't rage on and on; he just loses his temper from time to time. And his insight is born from instinct and, especially, experience; he applies what he's learned in the past to his current cases. If something doesn't feel right, he knows he has to investigate further, not jump to conclusions.

The cast is filled with good actors portraying seasoned, low-key professionals, which lends a welcome verisimilitude to the proceedings. In addition to those mentioned, solid turns are delivered by Annie Wersching (as Julia Brasher, a new police officer), Troy Evans (as a morbidly cheerful fellow detective), Sarah Clarke (as Bosch's ex-wife), Madison Lintz (as Bocsh's daughter), and Jason Gedrick (as a bad, bad guy).

Both Jamie Hector and Lance Reddick are veterans of The Wire, which points back to show runner Eric Overmyer, who has an estimable resume as a writer and producer, including that epochal series, as well as the more recent Treme and The Affair, and stretching back to Homicide: Life on the Street and beyond. He has an intimate knowledge of police procedurals, and Bosch reflects that experience; displaying supreme command of the narrative language, along with a firm grip on the nuances that set shows of quality apart from run-of-the-mill weekly garbage.

Bosch doesn't reinvent anything; it just does it better and stronger and with more finesse, making it well worth the investment in time to watch the entire series.

The first season of the series is now available to watch in its entirety on Amazon, with no additional charge for Amazon Prime subscribers.

Do you feel this content is inappropriate or infringes upon your rights? Click here to report it, or see our DMCA policy.
AmazonBoschEric OvermyerMichael ConnellyNow StreamingTitus Welliver