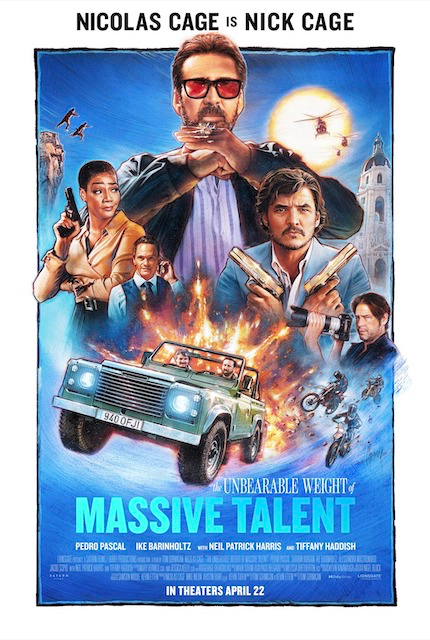 Nick Cage (Nic Cage) jets off to Mallorca after a series of personal and professional disasters leave him with no other choice than to make an appearance at the birthday party of a wealthy olive baron in exchange for a million-dollar check. If everything goes according to plan, he shows up, takes some pictures, tells some stories, and walks away with enough money to settle a few debts and can then focus on patching up the relationship with his ex-wife Olivia (Sharon Horgan) and daughter Addy (Lilly Sheen), both of whom are sick and tired of his all-consuming narcissism.

So begins the mega meta adventure that is Tom Gormican’s The Unbearable Weight of Massive Talent, a film about a fictional Nick Cage played by the actual Nic Cage that offers a peak into the legend of a Hollywood enigma. Kind of. It’s a purely fictional version of Cage imagined by Gormican and his co-writer Kevin Etten cobbled together from pieces of both his on-screen career and his well-documented off-screen travails over the last four decades. Both Cages are at turning points in their careers where they need to shit (commit to either living in DTV purgatory or making a real go at a career making art) or get off the pot (just fucking retire). Neither version of the man, the maniac, the Cage Rage is willing to go softly into that good night, though…

So, off to Mallorca he goes. The second his private jet hits the tarmac he is spotted by a pair of US federal agents played by Tiffant Haddish and Ike Barinholtz, who decide that he is the perfect pawn. It turns out that the birthday boy, Javi (Pedro Pascal) is suspected of being the leader of a major international arms cartel who have just committed a kidnapping that could change the course of the upcoming Catalunyan elections. They were expecting an operative to step off that plane, but when it was just one of the world’s most recognizable movie stars, they had to improvise, albeit without Cage’s knowledge.

When Nick arrives, it turns out it’s not a birthday party that’s beckoned him, but a superfan and wannabe filmmaker. Javi is the world’s biggest Nick Cage fan, a fact he proves over and over again through their delightful banter and an impressive collection of Cage-ephemera. Nick is dubious, but is soon won over by his host’s enthusiasm. Between that and the contact from our intrepid agents insisting that he must do what he can to find a missing girl or suffer the consequences, Cage is now in it to win it, and you know what happens with Nic/k Cage commits. Mayhem.

The real Cage was initially wary of taking on this role, which seems like a one note joke on paper, but Gormican and Etten’s script does some really solid character work that allows for the LOUD-quiet-LOUD Cage to do what he does best. The Unbearable Weight of Massive Talent is expectedly chock-a-block full of references to Cage’s oeuvre, some clumsier that others, but there are moments in which we revisit the reasons that he’s endured as an icon for so long that definitely warm the heart. This is essentially a buddy cop film by the end, and even though it’s clearly the Nic Cage show, Pascal really brings a warmth to his puppy dog portrayal of the big shot who turns softy in the presence of his hero that makes the whole thing work on a level I wasn’t expecting.

By the third act, we are fully engulfed in what could be described from the outside a typical DTV action film, thankfully the writing and obvious chemistry between Cage and Pascal make it into something more. If I’m honest, the action shenanigans are probably the least interesting part of the film, apart from the opportunities they afford Cage to draw upon his deep well of gonzo acting experience. The set pieces are cute, but it’s the performances that hold it together.

Beyond Cage’s obvious shouldering of a unique kind of project, the success of the film really hinges on the writing, and this script really delivers exactly what it needs to, when it needs to do it. He’s relatable, recognizable, but just outsized enough to be the Cage we want him to be. They play into the myth, but never forget that behind that myth is a man with a very rocky past. One of the film’s cleverest tricks is a recurring interior monologue depicted as a young Wild At Heart-era Nicky constantly heckling the more mature Nick to pull movie star moves and abandon the whole respectability game. It allows Cage to poke fun at himself – or at least the himself of 30 years ago – while still staying in character as a man trying to outgrow his youth and regain some semblance of his former glory.

With the meta narrative becoming all the rage over the last decade, it was hard to imagine an apotheosis for the form, but I think we may have peaked with The Unbearable Weight of Massive Talent. It’s impossible to think of another artist with such a unique public persona that blends so perfectly with his on-screen identity. Nic Cage plays Nick Cage with the kind of tenderness and explosiveness you’d expect from the man and the performer, and while it isn’t going to win any awards, it is a very charming diversion and a real treat for Cage fans, who will definitely have a blast playing spot-the-reference with the film’s nonstop barrage of greatest hits.

Note: trailer below is NSFW (not safe for work).

The Unbearable Weight of Massive Talent

More about The Unbearable Weight of Massive Talent