Fernando Úsaga Higuíta and Luis Felipe Lozano star in a daring, dazzling cinematic exercise, directed by Camilo Restrepo, that once again proves the future of cinema is in Latin America. 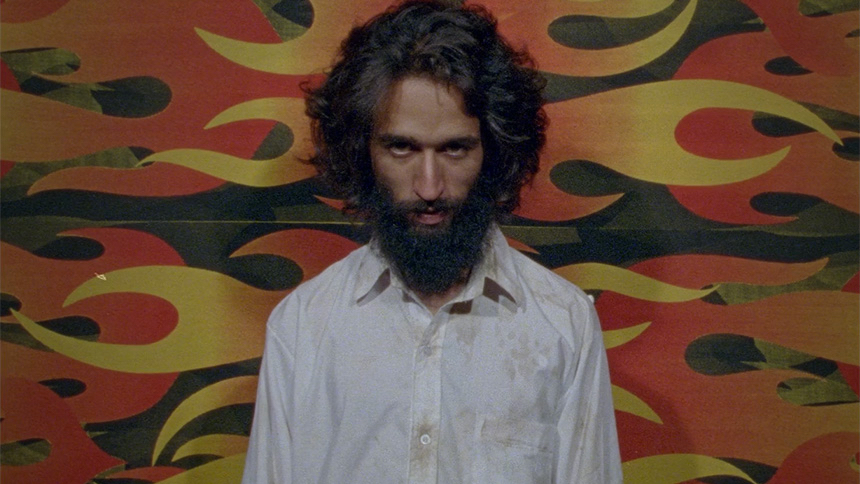 We are introduced to a young bearded man (Luis Felipe Lozano), who shoots his way out of an empty warehouse where he has been living, steals a motorbike and rides into the night. The economy of shots here is astounding: thrown flashlights, sound of a motor of a bike running then crashing (without ever showing an attack or crashing), an extended leash of a dog, and a barking (but without a dog).

It's all simple shots and gestures and some sound thrown in that suggest narrative. It tells you all you need to know though.

The voice-over comes in around 11 minutes after the credits. The young man is apparently running from an underground cult, a collective of people on the margins united by their hate of the society. Its leader, only known as 'Father,' has disappointed him. He saw something in the leader he can't forgive. It might have to do with him being a pedophile clown.

The timeline isn't very clear, as we see the young man getting fired from a silkscreen T-shirt factory for drug use, then breaking into a warehouse space in the middle part of the movie. Are we seeing the flashback?

The voice-over tells the story of abandoned kids he once saw on TV. The young man and his friend named 'Revenge' takes the role of the kids and have a joyride in the mostly empty city which is directly underneath Medellin (as suggested by empty highways and tunnels), the second largest city in Colombia.

The metaphor here is not so subtle: upper/under has been explored many times and in many forms successfully in cinema, from the Morlocks in Time Machine, to servants’ living quarters in Altman’s Gosford Park, to residents’ social status designated by what floor they live on in High Rise, to people dwelling in the basement in Parasite. What’s impressive with Restrepo’s film is its resourcefulness to show it with so little. Need to shoot in an empty street doubling as underground city? Do it in the abandoned salt-mine, show the mountain of waste? Shoot the film at the landfill, present the dualities of men? The double exposure, and so forth.

Laden with metaphors and parables, Los Conductos is ultimately commenting on the cyclical nature of violence and its culture in Colombia. It takes a jab at the early military government indoctrination -- the showy military parade, the child soldiers, the rampant waste of industrial and capitalist productions -- overproducing of junk, environmental destruction, false idols and the lost generation they created.

It's Restrepo's ingenuity of creating something complex out of nothing that is admirable here. With Arthur Gillette's appropriately pounding score, Los Conductos is a daring, dazzling cinematic exercise that is once again proving that the future of cinema is in Latin America.

Los Conductos opens in Film at Lincoln Center in New York on April 29, with a national rollout to follow, via Grasshopper Film.

Do you feel this content is inappropriate or infringes upon your rights? Click here to report it, or see our DMCA policy.
BrazilCamilo RestrepoColombiaFernando Úsaga HiguítaFranceLuis Felipe LozanoDramaMystery