SXSW 2022 Review: EVERYTHING EVERYWHERE ALL AT ONCE. Wow. 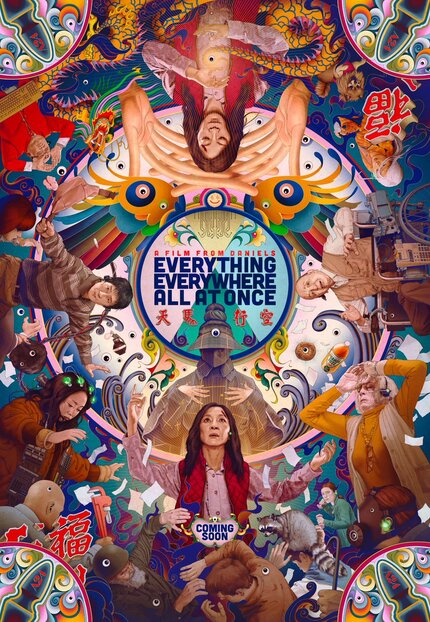 Regret is a terrible anchor. It anchors us not only to the lives we could've lived, but it can also end up keeping us from reaching the next step in our own journey often blinding us to what-could-be by keeping us focused on what-could-have-been, the older we get, the more choices we leave in our wake, the heavier and more entrenched that anchor can get. Unless we choose to change it.

Everything Everywhere All At Once, the new film from the directing duo of Daniel Kwan & Daniel Scheinert (collectively known as Daniels), is the story of one woman dealing with her own anchors and how they threaten to not only sink her, but drag her entire world down with her. It's a powerful, emotional, resonant journey of self-exploration, self-investigation, and self-implosion that spans multiple dimensions, generations, and timelines to force Evelyn – the magnificent Michelle Yeoh – to look at herself and the life she's living and figure out a way to make it work before it all goes away.

Evelyn and her husband Raymond, a sprightly Ke Huy Quan, operate a laundromat on the edge of collapse. Today they're being audited and it doesn't look good, too many interests and expenses – Raymond mentions to their doubtful auditor that his wife confuses hobbies for businesses when the tax deductions begin to look dubious – have left them in a bad spot and they are in danger of losing it all. The auditor Dierdre, played by Jamie Lee Curtis in one of the most delightfully scenery-chewing performances of the last few years, has pity on the couple and gives them until the end of the day to find the documentation that would make this all go away, but Evelyn has a few things to do first, like saving all of existence from extinction, but she has to get it done by six o'clock.

What follows is a rapid-fire existential science-fiction/action/comedy extravaganza that manages to walk a number of extremely fine tonal lines with the grace of a master gymnast. In a nutshell, immediately before her meeting with Dierdre, Evelyn is confronted by a kind an alternate universe version of her milquetoast-but-chipper husband who informs her that she is the key to the continuation of everything. There’s a lot of scientific and philosophical jargon about the multiverse, “verse-jumping”, and how each path-not-taken creates a new dimension full of new possibilities and how this Evelyn might be the vessel needed to confront an all-powerful maleficent force. This exhaustingly dense delivery of very important information leaves Evelyn – and the audience – more than a little confused, but equally intrigued. Seeing her business and her future in peril, and with seemingly nothing left to lose as her audit begins to spiral out of control, Evelyn takes the leap and shit gets weird.

There could not be a more apt title for this small story full of huge ideas than Everything Everywhere All At Once. The small-person-makes-a-big-difference story is one of the oldest archetypes in the world, but what makes this one different from those that have come before is that it never focuses on the named danger, in this case the end of everything, and rather uses that macro concern to explore very micro but very important and heavy themes. In fact, Evelyn seems less than interested in the end of everything, she doesn’t have time for that. Her business is failing, her marriage is on the rocks, her father Gong Gong (played with a vigor that betrays his 90+ years by the legendary James Hong) is visiting and in need of constant looking after, her daughter Joy (Stephanie Hsu) is aimless, and she has a party to plan. Let someone else save the world.

Evelyn is her problems, she is her regrets, they are all she thinks about, they consume her. She thinks about how she has disappointed her father, how she has failed to raise a “good” daughter, how the business and life that she’s built with her husband seem to be crumbling around them, and that’s all she thinks about. When the mechanics of verse-jumping to save the apocalypse happen to depend on connecting with what-could-have-been Evelyns in other realities, she sees all of the mistakes she’s made undone and corrected. It’s a trap, and she runs straight toward it like the Wile E. Coyote in a Roadrunner cartoon. Sometimes we all do.

During the Q&A following last night’s premiere screening at SXSW, Daniels took numerous questions from the audience, and while the session was unusually robust with solid inquiries, it was something that Kwan said as an aside that really brought home why Everything Everywhere All At Once is so special. After the seventh or eighth question about mental health, filial obligation, generational trauma – all topics explored with genuine depth in the film – Kwan pointed out that this was an unusual Q&A because he and his team had made an action film, and he’s right. It got a big laugh from the audience, but rarely have I been in the audience for a film this packed with kinetics that also had an entire room quietly weeping at its poignance. I was lucky enough to sit across the aisle from Curtis and Yeoh, and I glanced over more than once during the screening to witness both of them wiping away tears and the same time I was. It’s that kind of movie.

If I’ve made the film sound like a three-hankie weepie, well, I’m not sorry, it is. But holy cow, that’s only part of it. As Kwan mentioned in the Q&A, it is an action movie, and with Michelle Yeoh leading your cast, you know it’s going to be good. Yeoh’s action sequences are divine, perhaps a touch more stylized than those in her Hong Kong past, but that’s the movie we’re in. One of the real surprises for me was Ke Huy Quan, who audiences likely know best from his child star days in Indiana Jones & the Temple of Doom and The Goonies, but he had a short stint as an action choreographer in the late ‘90s-early ‘00s and when he kicks off the action with some impressive Fanny Pack Fu, the film really set its tone. This was going to be fast, it was going wild, and you never knew where it was going end up or what non-weapon (inanimate or animate) would end up in what orifice, and to what end.

Everyone in this cast gets their chance to shine, Yeoh obviously does what she does best, but Quan’s big screen comeback after twenty years is tremendous as well. The dynamic between Yeoh and Stephanie Hsu as her daughter feels very lived in and real; not mean, not malevolent, but stern and sometimes sad. Joy is aimless, but is that entirely her fault? The questions are huge, the ambition is multi-dimensional, and the answers are sometimes vague, but that’s life, and that’s what this film is. It’s messy, like life. It’s complicated, like life. It hides its big lessons in tiny moments that can be difficult to recognize, like life. It’s funny, but in that humor there is pain, there is trauma, there is catharsis.

Daniels have built a monument in Everything Everywhere All At Once. A monument to the importance of the one among the many, to the importance of living in the moment and learning to let go of the past and hang on to the present. Like any monumental piece of art, it changes depending on the angle from which you approach it, it changes depending on the light in the room, what elements are you focusing on, are they telling a different part of the story?

Everything Everywhere All At Once is the rare film that works no matter what you’re looking for in it. Do you want a love story? It’s there. Do you want action? Oh boy, is it ever there. Do you want a science fiction film that runs the gamut from super high tech to nerds driving around in a janky ‘70s van? You’ve got it. A treatise on the impact of generational trauma and the need to let go? Yup. Just interested in a kick ass score? Son Lux has you covered. Wild camera work? Larkin Seiple really brings it. Jenny Slate being the most Jenny Slate she’s ever been? You’ve be Slated. Meta movie homages? Would you like Wong Kar Wai or Ratatouille? You get both. It’s truly a feast, the kind that leaves you almost too stuffed to stand up from the table, but still reaching for that last bite. It’s incredible.

Do yourself a favor, experience Everything Everywhere All At Once, you’ll come out happier than you went in.

Everything Everywhere All at Once

Do you feel this content is inappropriate or infringes upon your rights? Click here to report it, or see our DMCA policy.
Dan KwanDaniel ScheinertJenny SlateStephanie HsuJamie Lee CurtisActionAdventureComedy