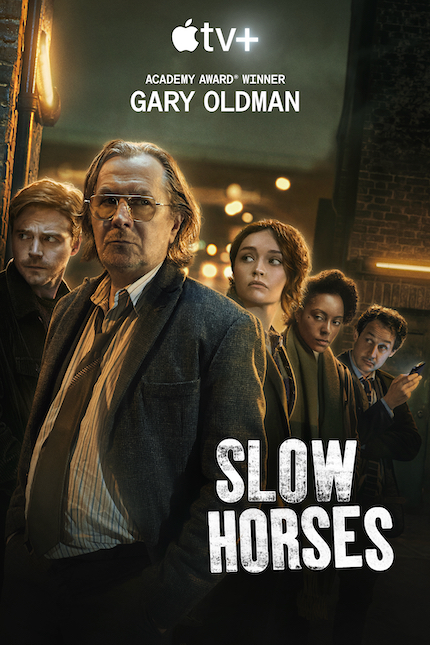 Without replicating a note of that brilliant performance, Oldman inhabits the role of a weary espionage agent who leads an MI-5 unit that is tucked some distance away from New Scotland Yard in a shabby building, filled with a small assemblage of discredited agents who are known collectively as "slow horses." Their unit is known as Slough House, where the woebegone agents occupy their hours by listlessly doing paperwork, taking long lunches, and pondering the meaning of their existence, when they're not too busy drinking and sleeping.

Some eight months prior, Agent River Cartwright (Jack Lowden) flamed out on a widely known, large-scale training exercise. Biding his time, he yearns to return to headquarters, or even to do any sort of work that truly matters, as he bitterly complains to his grandfather, David Cartwright (Jonathan Pryce), a retired master spy who retains sufficient standing to keep him from getting booted out of the service entirely.

In the office, the persistently grouchy Jackson Lamb (Gary Oldman) is a living espionage legend who barely displays a pulse, as though he were already dead, barking out derisive commands to his team, including the very experienced Catherine Standish (Saskia Reeves), the apparently capable Louisa Guy (Rosalind Eleazar), brilliant tech wizard Roddy Ho (Christopher Chung), and the extremely competent agent Sid Baker (Olivia Cooke), whose alert and able presence is a bit mystifying.

Everyone knows why River is there, thanks to his well-publicized cock-up -- which is showcased in heart-pumping style in the series' opening sequence -- though the reasons for every other agent's career exile is reserved for revelation throughout the series. As for River, he is determined to somehow regain his standing in the spy agency and takes note of any seeming irregularity.

When a young Muslim man is kidnapped by a right-wing extremist group, the "slow horses" look on with interest, while realizing that they are far-removed from taking any part in the investigation. That's not good enough for River, who soon picks up the scent of a trail that becomes increasingly convoluted and puzzling as it leads to unexpected sources and a string of dead bodies.

First published in 2010, Slow Horses kicked off a series of spy novels by Mick Herron. Directed in its entirety by James Hawes, who has a robust resume in helming quality episodic television, the six-episode series kicks off like gangbusters, then slows to a trot, which frequently picks up, then varies its pace, with surety and purpose, all in harmony with the scripting, led by Will Smith, who wrote the first three episodes, as well as the finale.

Much of the early going is seen through the eyes of the earnest River Cartwright, with Gary Oldman slouching and grouching in the background. His frequent presence suggests that, surely, at some point, he will step to the fore. When he does, he reminds of a battered old lion, roused from slumber, who is slow to fully engage. When he is fully and fiercely awake, though, he is ready to roar.

Kristin Scott Thomas makes for a chilly second-in-command of the primary espionage agency, as ambitious and fear-inspiring as Oldman is disinterested and somnolent. When they infrequently engage, sparks fly. As a whole, the actors are quite convincing; I especially enjoyed what Olivia Cooke, Rosalind Eleazar and Saskia Reeves brought to their characters, fleshing them out and providing a good counterbalance to Oldman and Lowden.

Do you feel this content is inappropriate or infringes upon your rights? Click here to report it, or see our DMCA policy.
Apple TV+Gary OldmanJack LowdenKristen Scott ThomasOlivia CookeUKUS