Now on 4K: LE CERCLE ROUGE, Born Innocent, But Not For Long 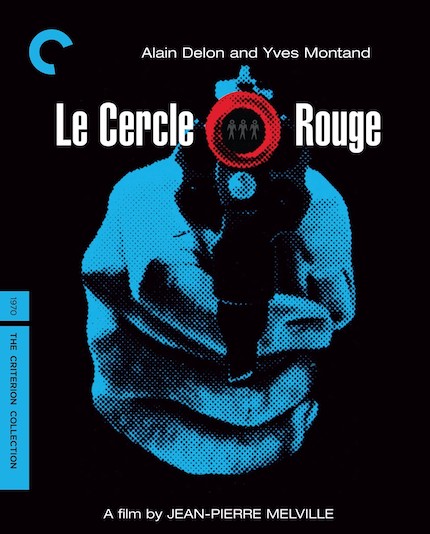 I'm not calling my lawyer or my bartender. Or telling you how the 4k looks in comparison to Blu-ray.

The primary reason to buy this edition now is to upgrade to the "new 4K restoration by StudioCanal of the uncut version of the film, with uncompressed monaural soundtrack," in the words of the Criterion Collection.

The extras, which are presented on Blu-ray in the new combo edition -- the 4K gets its own disc -- are carried over from Criterion's previous edition of the film, including segments from contemporaneously broadcast television shows devoted to the director, as well as on-set and archival footage, and interviews with assistant director Bernard Stora and author Rui Nogueira, and a trailer. The printed booklet features essays written by the insightful Michael Sragow and Chris Fujiwara to accompany the 2003 release, an interview with composer Eric Demarsan from 2000, and a brief appreciation by John Woo, in which he pays tribute.

My personal big-screen introduction to Jean-Pierre Melville came in 1982, when his 1956 gangster classic Bob Le Flambeur got a re-release, which inspired a smart repertory movie theater in New York to screen Les Enfants Terribles (1950). As a burgeoning film fanatic, those two experiences were seminal and, later, drew me to John Woo's A Better Tomorrow, The Killer, and Hard Boiled, which were all said to be influenced by Melville.

And we come full circle to John Woo's printed appreciation for Melville, and his acknowledgement that those films drew upon moments of inspiration from the French filmmaker. Melville considered Le Cercle Rouge (The Red Circle) to be "first and foremost a heist story," and it is an elegantly constructed depiction of a robbery that is far more than a simple theft.

Over the bare bones of a grand theft that is executed with quiet precision, the souls of five men are examined with cool dispatch by Melville. The running time dissolves even as the screen is filled with masterful compositions and artfully designed character interactions and timely coincidences and the fateful acceptance that the universe is waiting to crush out every flame that has ever been lit.

The penultimate film in Melville's canon of classics, Le Cercle Rouge carries with it an unmistakable aroma of death. As the lives of these few men, who live alone and apart from women and children, collide and coalesce and collapse, the film fan wonders what dark universe he has fallen into.

Do you feel this content is inappropriate or infringes upon your rights? Click here to report it, or see our DMCA policy.
Alain DelonAndré BourvilCriterionFranceGian Maria VolontèJean-Pierre MelvilleYves Montand