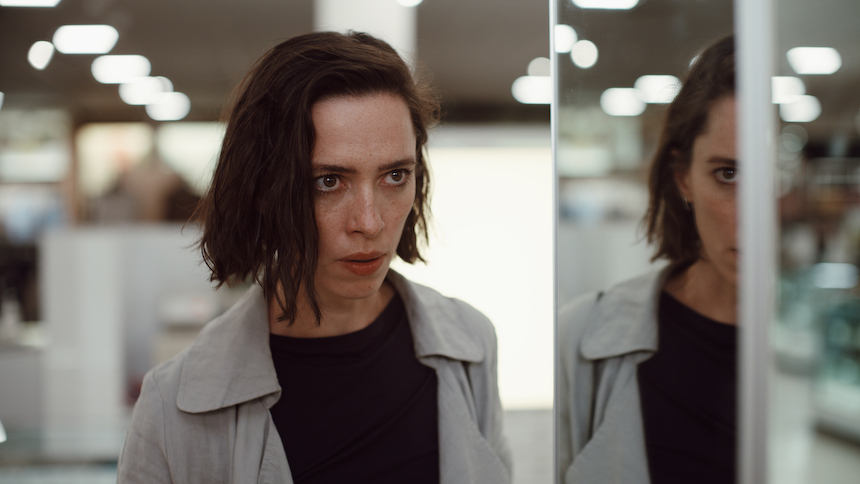 Shot in a bravura uninterrupted take by Semens and cinematographer Wyatt Garfield (Nine Days, Beatriz at Dinner, Mediterranea), the monologue relies on Hall’s utterly mesmerizing performance as the unraveling Margaret. It’s nothing less than a master-class in performance and engagement, drawing in viewers in not through visual effects, elaborate camera moves, or rapid-fire editing, but through Hall’s anguished delivery of Semens’s twisty, unnerving dialogue.

That monologue lays out a key, life-changing moment in Margaret’s personal history, a history filled with manipulation, abuse, and gaslighting by a sado-masochistic ex-partner. Before then, however, we’ve seen more than a few hints of Margaret’s great unraveling, from the familiar face she encounters at a biotech conference that sends her outside in a panic attack, to the same familiar face not-so-aimlessly wandering through a big-box store while Margaret shops with her 17-going-on-18 daughter, Abbie (Grace Kaufman), and finally to a public park near Margaret work’s place where Margaret, temporarily overcoming her deep-seated fears and anxieties, confronts the man, David Moore (Tim Roth).

Almost immediately, however, Margaret’s composure dissolves and she reverts to a former, much younger self, questioning whether David’s gaslighting represents objective reality and not her subjective perception of that reality. It’s clear, however, that David’s deeply destabilizing return will upend Margaret’s well-ordered life and maybe not in in the way Margaret or the audience wants or expects.

Resurrection’s early scenes strongly hint at Margaret’s turbulent inner life even before David makes his presence known. From her work life to her home life or even her romantic life, Margaret’s controlling, borderline authoritarian nature are more illusion than reality.

When she exercises, she doesn’t jog, she runs as if her life depends on it. When she learns her daughter has been injured in a biking accident, she responds not with healthy concern, but over-protection bordering on the pathological.

She keeps her married lover (and co-worker), Peter (Michael Esper), deliberately at arm’s length. He obviously wants more from Margaret. She just as obviously prefers he remain married and thus (partially) inaccessible.

As a character, David functions as a literal and figurative return of everything Margaret has repressed from her inner and outer life. While he hovers seemingly benevolent at the margins of Margaret’s life, he starkly represents the painful, anguished past she can’t physically, emotionally, or mentally escape and the decades-old mistakes she’s tried to sublimate into non-existence and thus, forget.

But the more we learn about Margaret’s deeply fraught relationship with David (an understament), the more she unravels, threatening whatever she’s earned or obtained in her professional and personal lives. In David’s gently sibilant voice, a simple, repeated word like “kindness” becomes freighted with ominous foreboding, a technique he’s used and continues to use to control Margaret’s reactions.

While Resurrection moves towards a seemingly inevitable denouement for Margaret and everyone in her immediate orbit, it’s Hall’s note-perfect, awe-inspiring performance as a woman breaking under the wrenching, unquantifiable weight of guilt, trauma, and loss that makes Resurrection an irresistible watch from the moment she enters the frame in the opening moments through the last, deliberately ambiguous image. That image naturally will leave some viewers with more questions than answers, exactly as Semens and his chief collaborators, beginning and unsurprisingly ending with Hall, intended.

Do you feel this content is inappropriate or infringes upon your rights? Click here to report it, or see our DMCA policy.
Andrew SemensAngela Wong CarboneGrace KaufmanMichael EsperRebecca HallResurrectionTim Roth