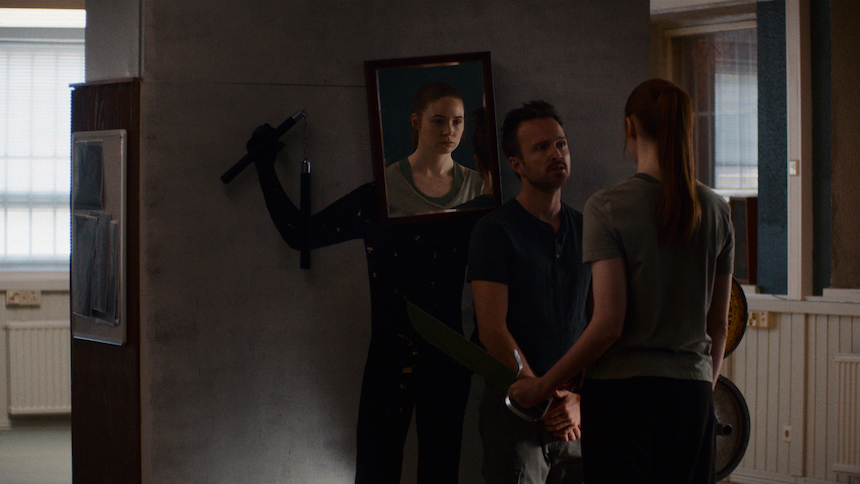 Dual may be nowhere near as bleak or despairing as Dostoevsky’s novella, but it’s just as comically absurd and subversively satirical, taking scalpel-precision aim at our 21st-century over-reliance on and co-dependent relationships with science, technology, and capitalism.

In setting Dual in a borderline dystopian near future (Finland doubling for the U.S.), Stearns swaps out Dostoevsky’s uncanny doppelgänger with a more 21st-century-oriented, speculative idea, a clone, or rather an entire subset of the economy dedicated to the creation and sale of clones, not, for example, for body parts, but as literal replacements for their gene donors. Stearns posits a future where bodies are commodified and death, a natural part of life for millennia, can be hand-waved away by the newly-dying to replace them, alleviating the emotional, mental, and physical burdens on loved ones once the gene donor departs his or her life (presumably to be recycled).

Stearns’s near-future society also remains unapologetically, uncritically capitalism-oriented. When a gene donor can’t afford to pay the entire balance for a replacement, a payment plan extending past the life of the donor and onto the replacement remains an attractive (and for some, only) option. The clones, of course, have no say on when or where they awaken from their unseen vats, the financial obligations their purchasers place on their identical shoulders, or the burdens of transitioning into new, possibly unwanted lives.

That’s all backstory and exposition, of course, for the protagonist, Sarah (Karen Gillan), in Stearns’ film. After learning via the driest, drollest delivery from her doctor that she has a rare, incurable illness, Sarah, moderately concerned about her boyfriend, Peter (Beulah Koale), and her mother (Maija Paunio), signs up for a replacement.

When Sarah Prime, however, learns that she’s in remission from the supposedly incurable, terminal illness that was supposed to prematurely remove her from the physical world, she decides to regain the life she didn’t care that much about, setting in motion the state-sanctioned, state-mandated duel at promised in the title: Sarah Beta activates a constitutional clause that gives her the legal right to literally fight for her life. Rather than accepting the alternative, “decommissioning,” Sarah Beta challenges Sarah Prime to a duel-to-the-death in exactly one year’s time. Sarah Prime responds, not with self-reflection or introspection, but by hiring an ultra-serious personal combat trainer, Trent (Aaron Paul), to help her prepare for the duel and more importantly, win her previous life back (boyfriend and slightly judgmental mother possibly included).

What sounds like a relatively simple, straightforward narrative, however, isn’t. Stearns injects the deadpan drollery  that’s defined his relatively short career as a filmmaker into Dual. As Sarah Prime and Sarah Beta, Karen Gillan delivers her lines with a monotone blankness that borders on the mechanical. Gillan deliberately sounds even more robotic here than she ever has as the Marvel Cinematic Universe’s resident cyborg, Nebula.

Gillan’s line deliveries make an odd sort of sense (more for Prime than Beta) as an exterior manifestation of the credo that an “unexamined life isn’t worth living.” For Sarah Prime, her life does become worth living, but only when she’s most likely to lose all of it. Her counterpart, however, learns the everyday, non-financial costs of living Sarah’s incredibly non-extraordinary life, yet she too can’t see forfeiting the duel or any other alternative.

Dual premiered on Saturday, January 22, at the Sundance Film Festival.

Do you feel this content is inappropriate or infringes upon your rights? Click here to report it, or see our DMCA policy.
Aaron PaulBeulah KoaleDualKaren GillanMaija PaunioRiley StearnsTheo James