Okado do Canal, Jules Elting, and Matheus Nachtergaele star in a sci-fi thriller from Brazil, directed by Renata Pinheiro. 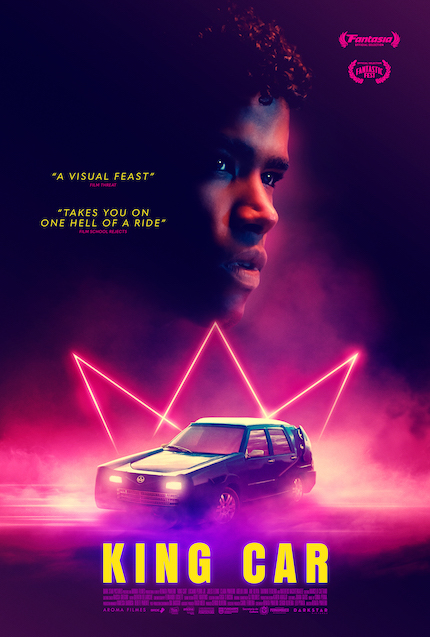 A mechanical messiah promises to bring power to the people of Brazil after new legislation threatens the livelihoods of the proletariat in Renata Pinheiro's painfully topical King Car (Carro Rei).

Uno (Luciano Pedro, Jr.) has always had a way with cars. Born in the backseat of one of his father's taxi cabs and growing up around the company fleet, the boy felt connected to these cars in a way that no one else could understood. More than comply an affinity for the machinery, Uno communicates with his vehicular brethren, but this mutual understanding can have disastrous effects.

When a new law bans cars older than fifteen years, Uno's father's taxi fleet comes under a mortal threat. They cannot afford to lose their business, and moreover, Uno's Uncle Zé (Matheus Nachtergaele) cares for these vehicles like his own children, maintaining them to the point that they are as efficient as an older car can be.

When Zé discovers Uno's ability, something changes in him. Decades of devotion to the art of automobile maintenance makes him envious and desperate to communicate with his wards like his nephew does innately, and he'll go to any length to make it happen.

Soon, an army of revitalized super cars are on the way, the result of Zé's proletariat army of workers and a little guidance from the newly crowned King Car, the original taxi that triggered Uno's unique ability. At first it seems like a perfect solution to the problems presented by the ban on older vehicles forced upon the working poor of Brazil by the government, but soon it becomes clear that this quasi-socialist revolution is leaning toward the disaster that plagues so many other such movements in Latin America.

Never a film to let an opportunity for metaphor go unexploited, Renata Pinheiro's work here is clearly focused on tackling the lower-middle class frustration with elitist solutions to working class problems. At first, the idea of taking newly banned vehicles and rendering them usable once again at a fraction of the cost of replacement seems like a perfectly reasonable, and even intelligent solution. However, when Zé and King Car monopolize the supply and means of production, it becomes little more than a different form of oppression, shifting from an outright villain in the government to a wolf in sheep's clothing.

There are plenty of side journeys to follow in King Car when the main one starts to wear thin. There are a couple of love stories, boy-girl, girl-car, etc..., there's a different guerrilla approach to the problem imposed by a government willingly ignorant of the concerns of its neediest people in the form of environmental crusaders/eco-terrorists, lots of dancing and sloganeering, but the real focus shines so bright that it's difficult to miss.

Pinheiro's work here is exceptional, from the framing to the dramatic choreography, to her wonderful command of her performers, King Car is the kind of big swing that is often relegated to the early part of a filmmaker's career. This is her second feature, and much like fellow sophomore Julia Decournau's Titane, it's a wild one.

Perhaps nowhere is Pinheiro's confidence in her project more apparent than the performance of Matheus Nachtergaele as Zé. Nachtergaele makes some big choices, and they are perhaps the most memorable part of an already quite admirable film. Zé is presented as a kind of automobile savant, not the best with social graces and mildly handicapped, but once the alliance with King Car kicks off, he turns into a kind of bestial carnival barker, savage and sublime in his movements and words. It's not an exaggeration to compare this performance to the best collaborations between Leos Carax and the divine Denis Lavant, I cannot wait to see more of Nachtergaele.

While King Car isn't exactly subtle about what it wants to say, it certainly helps to have a cursory understanding of Latin American liberal politics to really get the most from its pointed satire. However, even without familiarity with the toll that the region's unique history with socialism has had on the proletariat, King Car is certainly engaging on its own cinematic merit. One of the strongest genre features of the year, King Car is definitely one to seek out.

Originally published during the Nightstream Film Festival in October 2021. The film opens in select theaters on Friday, January 7.