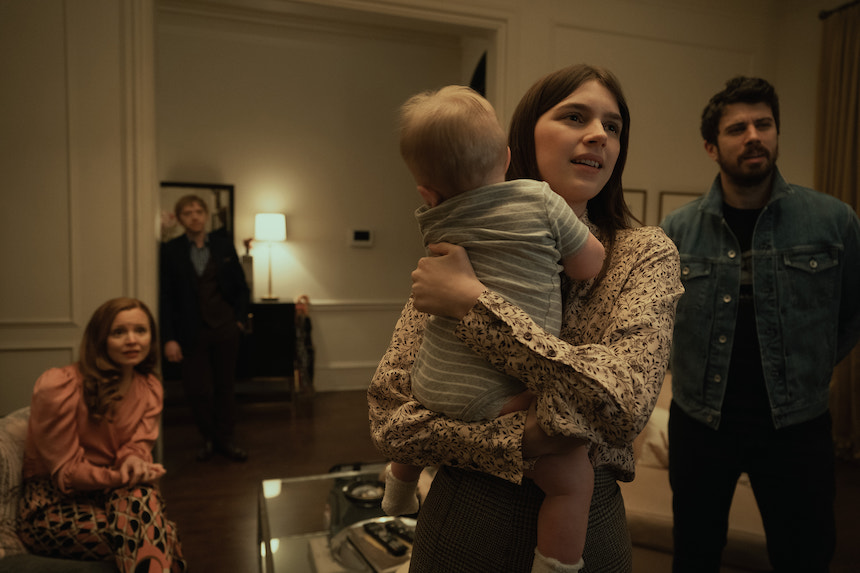 The new season points in a new direction, maybe.

Throughout its first two seasons, Servant charted a path that kept feinting toward the supernatural, while leaving open space that kept it within the realm of everyday horrors and strange, somewhat relatable occurrences.

Lauren Ambrose and Toby Kebbell star as Dorothy and Sean, a married couple in Philadelphia who have achieved success in their professional careers -- she's a local television reporter, he's a gourmet cook -- and live in a gorgeous brownstone building. They want a family to complete the picture, but suffer a tragedy that sends them into a tailspin, which is halted only after they hire the mysterious Leanne (Nell Tiger Free), who quietly carries a lot of emotional luggage, yet gradually helps Dorothy and Sean to heal.

In time, Dorothy and Sean have a healthy infant child, Leanne's past in a very dark and extremely controversial cult is revealed, and everything seems better. Even the dark suspicions of Dorothy's brother Julian (Rupert Grint) are quelled.

As season three begins, Leanne continues to emerge from the shadows of her past, but shadows never die in the sunlight. Inevitably, the darkness beckons.

Created by Tony Basgallop, the series carries its own baggage, in that we've come to expect and/or anticipate and/or dread certain things from executive producer M. Night Shyamalan, who has directed some episodes, as has his daughter Ishana Night Shyamalan, as have Carlo Mirabella-Davis, Dylan Holmes Williams, Celine Held & Logan George, Kitty Green, and Veronika Franz & Severin Fiala, the latter pair familiar from Goodnight Mommy and The Lodge. They are all skillful practitioners of creepy horror, wherein the terror slowly envelops the mood and atmosphere of the piece.

Thus, we can enjoy the determined brightness of the early Season 3 episodes, while also sensing that such happiness will not last. What helps considerably is that the episodes run only 30 or so minutes, which means they each build toward a resolution of some sort within the limited running time, even as the series builds toward a conclusion.

The individual episodes in the first two seasons were not all successful in building tension; some felt like a chore to sit through, waiting for something to happen. Through the first half of the season, the pleasure comes in large part from watching the four lead actors find surprising new notes to play in their characters. It should be interesting to see where this takes them on the dark side of Philadelphia.

Do you feel this content is inappropriate or infringes upon your rights? Click here to report it, or see our DMCA policy.
Apple TV+Lauren AmbroseM. Night ShyamalanNell Tiger FreeRupert GrintToby KebbellUS