Now Streaming: THE BOOK OF BOBA FETT, Return From the Dead

Temuera Morrison and Ming-Na Wen star in the series, directed by Robert Rodriguez, now streaming on Disney Plus. 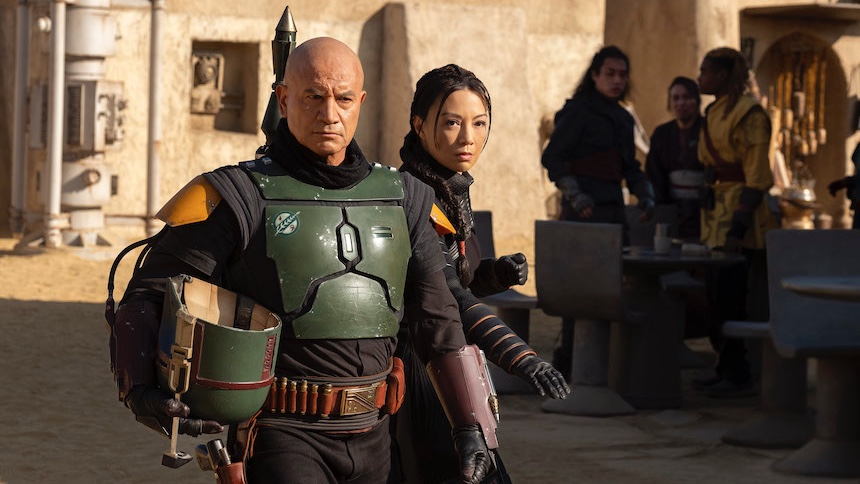 You can't keep a good villain down.

The Book of Boba Fett
Now streaming on Disney Plus.

Created and written by Jon Favreau, and directed by Robert Rodriguez, the first episode of The Book of Boba Fett functions very much as a traditional pilot episode for a broadcast television series. The protagonists are introduced, their place in the world is established, supporting characters are brought on stage, antagonists enter the picture, and action scenes ensue.

Since this is a dramatic series, the backstory of the leading character is also hinted at. Since this is a Star Wars series on the Disney Plus streaming service, a lighter comic layer is also present in order to leaven the dramatics for a family-friendly audience.

Portrayed by Temuera Morrison, who played Jango Fett in Attack of the Clones, from whom Boba Fett was cloned, the character has recently assumed the throne that formerly belonged to Jabba the Hutt -- who remains dead -- on the planet Tatooine. Boba wants to be respected, rather than feared, he tells Fennec (Ming-Na Wen), his second-in-command, and so he declines her repeated offers to kill various potential troublemakers.

Naturally, this leads to further trouble, which leads to a battle on the dusty streets with some nifty armaments, and plenty of fighting and jumping and leaping.

It's difficult to say where the series might go from here. Boba Fett is a longtime favorite supporting character of mine in the Star Wars universe, though, which means I'm a little apprehensive about his prospects as the lead character of, not just a movie, but a series.

In its favor, Temuera Morrison and Ming-Na Wen are more than capable actors, and the first episode suggests more stories of Boba Fett's mysterious missing five years will be explored, along with more battles as he endeavors to further establish his rulership over Tatooine. In addition to the previously-mentioned new armaments, we also see new robots and new creatures, all of which is a far cry from the desolate wasteland of a planet that was originally unveiled in 1977.

Also: Jennifer Beals makes a brief appearance as the cantina owner, so that's another avenue that will likely be explored. The overall potential for the show and its cast of characters is enticing.

In summary: Let's see what happens next.

The Book of Boba Fett