At 70, Abel Ferrara lives with his partner Cristina Chiriac and their little daughter Anna in Rome, Italy. Far from the city that made him a legendary filmmaker, he makes fictions and documentaries with absolute creative freedom, personal works that don’t follow narrative conventions.

Zeros and Ones, his most recent film and for which he won Best Direction at the Locarno Film Festival, is sure to frustrate those who expect the “political thriller” that the synopsis sells. Ethan Hawke plays an American soldier and cameraman who returns to Rome, where he learns that his revolutionary brother (also played by Hawke) is "in prison." Inquiring about his whereabouts, he’ll notice that in a world of American and Italian soldiers, and Russian agents, it’s impossible to trust anyone.

Like the documentary Piazza Vittorio and the very personal Tommaso, Zeros and Ones also takes place in the multicultural area where Ferrara currently resides. “It’s all based on our reality and where we are,” Ferrara revealed in an interview with ScreenAnarchy and added: “It’s a cinematic expression of what was going on right out my window. The pandemic is an obvious example of it.”

Zeros and Ones doesn’t evade our current pandemic era, full of masks and antibacterial gel. A scene linked to one of Ferrara's quintessential themes, drug use, is notorious because the dealer uses a disinfectant spray to clean the money from a sale.

The shooting, the filmmaker recalled, took place “during the pandemic, pre-vax. So this is like life and death, those protocols. It’s not fiction, It’s the reality. The Chinese, they burnt all their money. Money is the filthiest, dirtiest… that’s how people get sick in a normal world, OK? A dollar bill could have the germs of 50 different people, you dig? It’s a dangerous time, there’s a lot on the line. At the same time, I knew I had to make a film. At a point you got to step out of quarantine and re-enter the world. You got to do it with courage, doing what it takes to keep you and the people around you as safe as possible. Thank God nobody got sick.”

Zeros and Ones joins the constant exploration of religion and spirituality in Ferrara's work. The most striking image in the movie? The explosion of the Vatican. While Ferrara has been practicing Buddhism for years, reflected in films like 4:44 Last Day on Earth, I asked about his current view of the Catholicism he grew up with:

“Actually being a Buddhist has brought me closer to Jesus than I’ve ever been. Life is better with spirituality. You need to find your own position, how you feel, not only to answer the questions: where we come from? Where we are going? But how do you deal on a moment to moment level in the world? How do you relate to other people? How do you stay the best version of yourself? How do you stay being human?” 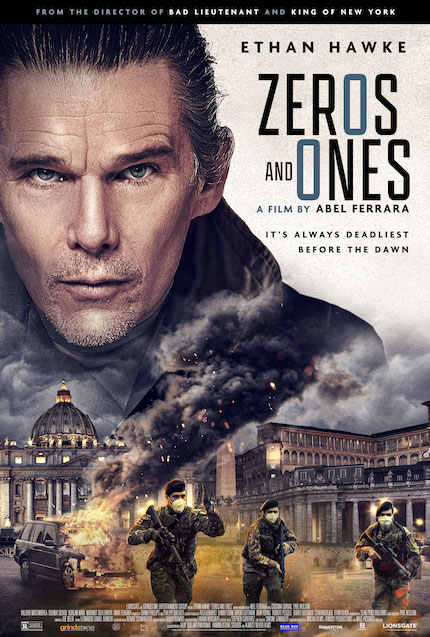 A filmmaker who looks ahead

For Ferrara, today there are no differences in the process between a documentary and a fiction:

“On one hand, I understand it all. And on the other hand, every time is like I’m doing it for the first time. That’s the beauty of it, that’s the challenge of it, you never know where it’s going to take you, every part of it: the story, the way you shoot it, how you cut it, what music you’re going to use. You have the same guys, everybody is different, everything is always changing, all the elements. You make a movie, it’s a financial commitment on somebody’s part. There’s so much at stake.”

Ferrara feels back to his beginnings, when he filmed The Driller Killer in New York with a small crew: “I didn’t realize how lucky we had it. We keep trying to get back to that. I just feel better that way, I like to shoot fast. Less people, more commitment. With the equipment we have now we can exploit it. We don’t need that much money.”

The digital effects of the Vatican explosion, the use of drones or the emphasis on the digital age in Zeros and Ones indicate that Ferrara continues to look ahead, experimenting. “Anything that we could use to tell the story better, put that camera in a better place – that’s what the drone is about – I love it. The editing process, the manipulation of images, the quick way we could share ideas, where we could work remotely… this is all fucking great,” stated the filmmaker.

When questioning him about the present of the film industry, Ferrara said that the newer generations have “more opportunity, especially young people, to put images together, to put sound together, to express their ideas. That the kids get access to the means of production, is fucking great. That they can share their ideas on something like the Internet: great.”

While the Bronx native continues to work, much of his filmography remains relevant. For example, Ms .45, which celebrated its fortieth anniversary, has become essential to discuss the evolution of the controversial rape-revenge subgenre, which has resurfaced thanks to various female filmmakers.

Ferrara attributes to his collaborators the respect Ms .45 provokes: “It was written by an inspired guy, Nicky (Nicholas St. John), he’s spiritual and brilliant. Then Zoë (Lund), at the time she was 17, it was like the perfect union: the actress meeting the material. She brought her thing to it, which was a total opposite, her feminine side. But Nicky was in touch with his feminine side. In the end, it’s their intelligence and talent, the writer and the actress, then that’s when you get magic.”

King of New York, another collaboration between Ferrara and St. John, is a case similar to the one mentioned above. In 2020, on the podcast The Rewatchables, Quentin Tarantino recalled how much its release meant because it was wild, violent and unapologetic after the repression and correction of the 1980s.

Does today's American cinema need a similar jolt?“I’m not seeing enough films to make a judgement like that, you know what I mean?,” Ferrara confessed, “I live in Europe so I travel more East than West in seeing films, so I see pretty wild movies coming from the craziest place.”

Bad Lieutenant, starring the great Harvey Keitel, was recently compared to Uncut Gems. Both follow an uncontrollable New York gambler and the actions of a playoff series: with Ferrara baseball and basketball for Josh and Benny Safdie. It’s no coincidence, since Ferrara has a years-long connection with the brothers, he acted in Daddy Longlegs and the DP of Zeros and Ones is Sean Price Williams, who shot Heaven Knows What and Good Time for the Safdies. A smile crossed Ferrara's face as he heard about the reminiscences between Uncut Gems and his work. “Yeah, I saw that. I thought it was great, Adam (Sandler) was great in that,” Ferrara commented before changing the course of the conversation.

"Where are you now?” asked Ferrara. “I’m from Mexico," I replied. He jumped into the unclassifiable Siberia, his umpteenth collaboration with Willem Dafoe:

“We were there [Mexico] about two years right before the pandemic. We shot Siberia in Mexico City and then in Mexicali, you know? It was like two different countries, Mexico City, then you go to the American border, to the desert [Daniel Giménez Cacho appears in this part of Siberia]. It was super interesting. That was great, man.”

Zeros and Ones is now available in select theaters, on Apple TV and everywhere you rent movies. It’ll be available on Blu-ray and DVD on January 4, 2022.

More about Zeros and Ones