Review: PROCESSION, Filmmaking As a Conduit for Healing

Directed by Robert Greene, 'Procession' is one of the most powerful and important documentaries ever made. 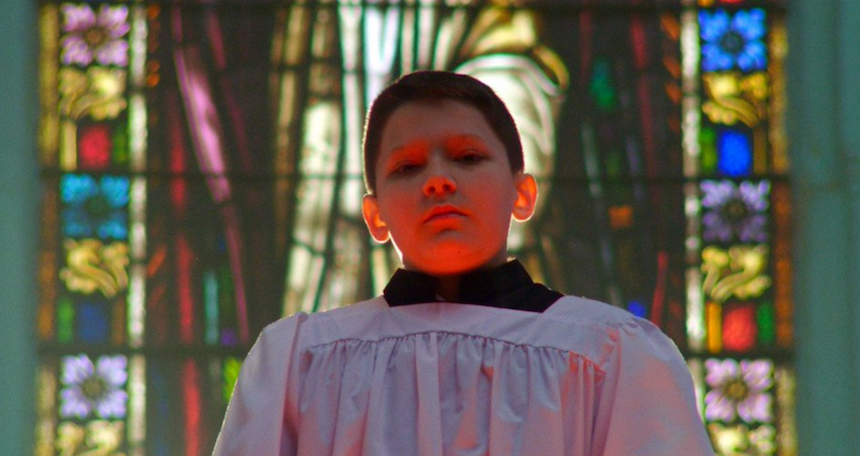 Robert Greene, no stranger to the participatory, process oriented cinematic experiments (Actress, Kate Plays Christine, Bisbee 17'), presents a powerful documentary about a highly controversial subject - a rampant child sexual abuse by catholic priests. Procession, the filmmaker's collaboration with the abuse victims and a drama therapist, is perhaps the most powerful and impactful documentary I've ever seen since Act of Killing.

Greene, who moved to Missouri in 2015, to become Filmmaker-in-Chief for the Murray Center for Documentary Journalism at the University of Missouri, saw a news clip in 2018: a news conference of an attorney Rebecca Randle, who's been overseeing hundreds of abuse cases involving catholic priests in Kansas City and surrounding area over decades, accompanied by three victims, accusing many still practicing catholic priests of sexual abuses, when the victims were altar boys in grade school. This explosive and emotional news clip was a springboard for Procession, a project three years in the making, which premiered at this year’s Telluride Film Festival.

There's Tom, Michael, Mike, Joe, Ed and Dan. These participants are there to reenact the most painful memories of the abuses, to confront and crush their fears that haunted them most of their adult lives. What's striking from the very beginning of the film is their immediate strong bonds - awareness, love and understanding of each other among 6 men who never knew one another before the project began. For me, it is their kinship, borne out of collective trauma that is the main takeaway of this immensely moving film.

There are the green glowing eyes of a priest and mass attending public‘s accusing glances which make the victims feel powerless. There’s the power of coercion in the confessional and the church appointed ‘independent review board’ rejecting claims of abuse from the victim for lacking merits. By reenacting these scenes and playing the roles of each other's abusers, there is a real danger it might backfire and harm the participants, and everyone involved in the project is acutely aware of this. But it’s their commitment toward the project, to honor the victims who lost their lives to suicide, alcohol and drugs after the abuse and to hold those responsible accountable by exposing them in these scenes and to help each other that outweighs the risk.

For many of them, just being inside of a church is hard. It's in the small things that trigger the suppressed, painful memories to come to the surface. For some, it's the smell of incense, the wood varnish on the pews or the chlorine of the swimming pool, or the color of stained glasses or the dark wood furnishings that bring up those memories. Gestures, hands in the religious ritual take on the significance in their suppressed memories too. And they are all put on the screen. The settings and items that should bring the feelings of security and comfort, instead, they've become things of nightmares for the participants.

There's a lot to be said about the hypocrisy of being 'men of god' and those in power in these pedophile priest cases. It was the sense of powerlessness as a young boy many victims felt that led to much undeserved self-blame and shame. By writing their own scenario and directing their own reenactments, Greene recognizes the power shift that can be beneficial and even cathartic for those who are participating. And a lot of catharses and breakthroughs happen  before your eyes in Procession.

You can't help but being teary eyed watching these grown men who's been trying to suppress those memories and they manifested terribly into their lives- recurring nightmares, insomnia, feeling of guilt, shame, relationship, trust issues and anger.  There is also an added context to the film taking place in Missouri and Wyoming, that this is the epitome of the American Midwest, where men were taught to be tough.

In Bisbee ’17, Greene involved entire community to participate in reenacting a centenary historical event for understanding and healing. In Procession, tending to only those 6 participants, the emotional impact is much greater with them telling their own intimate experiences. If historical context and taking artistic liberty in portraying the event was necessary in Bisbee, the filmmaker rightfully chooses not to delve too much into participants’ personal lives, but rather zero in on the abuses and its effects in Procession.

Procession also tells the power of popular narratives. Ed Gavagan, a contractor from New York, likens the participants including himself as the Avengers, uniting to fight for justice using the hammer of Thor, in the beginning of the film. A member of the film crew hands him a sledgehammer to destroy the set after finishing shooting his reenactment, as he gratefully accepts it to finish the job- having a breakthrough, in the most literal sense.

Netflix is doing the world a favor for picking the film up for its distribution and streaming. Procession needs to be seen broadly and widely discussed and the pedophile priests need to be exposed out in the open.  The personal stories of Joe Eldred, Mike Foreman, Ed Gavagan, Dan Laurine, Michael Sandridge, and Tom Viviano need to be widely seen and their kinship celebrated. Procession is one of the most powerful and important documentaries ever made.

Procession opens at Metrograph in New York on November 12. It will begin streaming on Netflix on November 19.