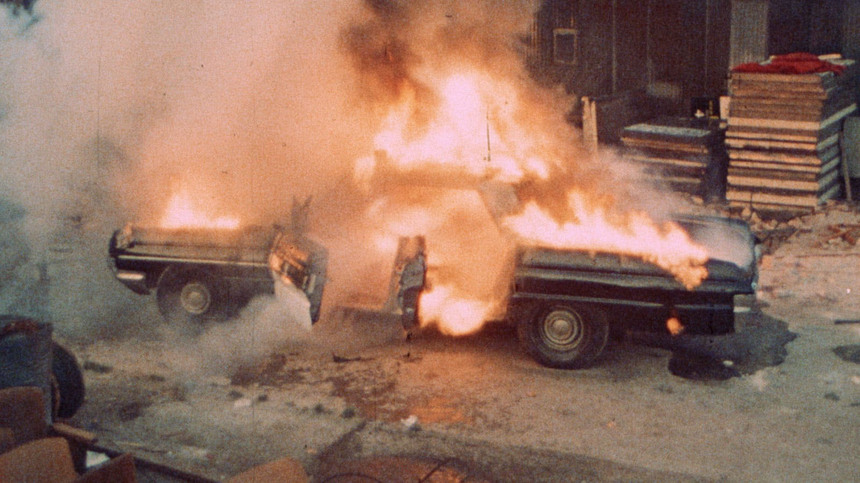 Director, novelist, sometime options trader Melvin Van Peebles died September 22, a week before the Criterion Collection was set to unveil its detailed totem to the filmmaker's early work. The five-disc Melvin Van Peebles: Essential Films presents the director's Story of a Three-Day Pass (1967), Watermelon Man (1970), Sweet Sweetback's Baadasssss Song (1971) and Don't Play Us Cheap (1972), along with Baadasssss! (2003), Van Peebles' son Mario's testament to the making of Sweetback, as new instalments of the Collection.

Double-thick in the slipcase, Sweetback -- on its fiftieth (!) anniversary -- is of course the anchor-piece of the set. A restoration at this level (4K, supervised by the director) has been long in coming for a film that often got lumped in (and cheapened down) by its inclusion with "blaxploitation" genre exports on early-days DVD. I've seen the film a couple of times in grainy telecine ported to standard-resolution DVD around the turn of the century; I've never seen it like this.

Like a lot of white men who went to film school as Quentin Tarantino was coming up and breaking out in the '90s, I had my blaxploitation phase. Mine was neatly bisected by Sweetback, which gets misassigned to that genre due to aspects of its plot and theme. A Black sex worker (Van Peebles, directing and performing his own script) is caught in a wrong place / wrong time altercation with white cops and ends up beating them senseless, and then goes on the run. He flees through the rest of the picture, as pressure mounts on the white establishment to locate and contain this increasingly revolutionary figure.

And [spoilers for a movie that came out 50 years ago], Sweetback makes it across the Mexican border. He escapes. The machinery of the white establishment, both within the picture and outside it, does not contain the man or the character; conservative comeuppance need not apply narratively or generically. This film shattered a paradigm and left it broken on the floor.

As a viewer, then, or at least in my case, it's impossible to return to the "blaxploitation" genre after watching Sweetback without more critically understanding the mechanisms at play in the production and marketing of those films, or American films as a whole. Sweetback was three times a middle finger to the white cultural establishment: its hero got away with it; its director flipped a 3-picture deal with Columbia to make this instead; and the genre to which two generations of home video marketers have attempted to assign the film could not contain it.

The film remains as powerful now as it was the first time I saw it, mercurial and flippant, trading the polished production style of Van Peebles' previous features (on which, more in a moment) for a sound-and-light show, shot primarily in Watts, whose every aesthetic, narrative, and creative choice is purposefully subversive.

Some of it doesn't play: there's still the disruptive and disturbing early sequence in which a pre-pubescent Mario Van Peebles, the director's son (playing young Sweetback), has a fully-nude sex scene with an adult woman, which was ghastly fifty years ago and now just seems abusive.

But the film opens with a provocative title card (one of several) that holds it as "starring the Black Community," and that verisimilitude plays throughout, embroidering some of Van Peebles' more daring stylistic concerns with an earthbound sense of place. Sweetback has a lot on its shoulders, and it carries almost all of it.

Naturally, the film was so explosive upon release that it has tended to overarch much of Van Peebles' career, both as a filmmaker and otherwise; the remainder of the Criterion set works to relocate Sweetback as part of an evolving outlay of stylistic and thematic concerns that took place across Van Peebles' first four features.

The offscreen narrative around the director's first feature, The Story of a Three-Day Pass, is almost as mythic as that around Sweetback. Having made a pair of short films in the 1950s but finding no support or interest from Hollywood, Van Peebles decamped to France with his family, learned French, mucked about in the art scene for a while and wrote a few novels.

Finding a loophole in a governmental funding scheme that would allow the authors of French novels to adapt their own work to the screen (the scheme was fuzzy on whether or not the applicant actually had to be French, or just have written in French), Van Peebles set up Three-Day Pass as his first feature and then brought the film back to America as a film festival foreign entry -- with all concerned only catching up to the fact that he was an expat American as the accolades began to roll in.

With The Story of a Three-Day Pass, Van Peebles seems to have absorbed and made purposeful all the playful lessons of the French New Wave; the film is a catalogue of them. Jump cuts and perspective shifts litter the story of a young Black military man, Turner (Harry Baird), given a long weekend off by his superior, ostensibly leading up to a promotion the following week.

Baird plays scenes against his mirror reflection as a visualization of his inner critic, who knows that his captain will only give him the promotion if he "behaves himself" (translation: does not have sex with any white women). "He thinks I'm a good negro," Turner needles (and is needled by) his more cynical mirror image. The rest of the film will critique both that framework, and Turner's self-effacing ability to operate within it.

He does, of course, meet a white woman named Miriam (Nicole Berger), and does, of course, get "caught" with her by a few of the men from his base. As the film proceeds, Van Peebles leans heavily on the Nouvelle Vague technique of reminding the audience repeatedly that they are watching a film; one shot of a crowd of dancers parting in slow motion to reveal Turner is breathtaking, and a series of flash-fantasy sequences where Miriam dreams Turner is chasing her through the African bush as they are about to have sex walks the cliff's-edge between funny and chilling.

Three-Day Pass brought Van Peebles back to America and set him up with the aforementioned three-picture deal at Columbia. His manager put him together with an astonishing high-concept comedy that had been written by Herman Raucher called Watermelon Man, in which a self-absorbed white asshole wakes up one morning to discover that he has turned Black overnight.

(I say "asshole" instead of "bigot" because while Jeff Gerber is certainly the latter, his racism is of the largely casual, privileged variety; he's also a misogynist, a jerk, a serial sexual harasser, and not a particularly nice person to be around. You'd cross the street to not have to talk to this guy in passing.)

The plan had been to have Jack Lemmon or someone similar play the Gerber role in blackface; Van Peebles quickly did away with that, recognizing that Gerber is only white for the first 5 or 10 minutes of the film, and should be played by a Black actor. Van Peebles also got rid of the escape-hatch ending, where Gerber wakes up realizing that it had all been a bad dream -- Blackness as nightmare, giving way to the safety of returning to the "right" race. The studio knew who they were making the picture for; Van Peebles, of course, didn't give a fuck, and detonated the engine of the story to create something far more subversive.

Instead, Godfrey Cambridge takes the lead role (in some dodgy, but not entirely unsuccessful, whiteface makeup for the opening stanza), and Van Peebles' new climax tilts the film directly towards Sweetback's revolution. Good thing, too: Watermelon Man, as a piece of experimental cinema, is at least watchable, and becomes more and more precise and sharply insightful as it goes along. As a studio comedy, though, it's damn near a disaster.

The film plays to a white audience as an extremely clumsy farce, and not a successful one. Most of the jokes aren't funny, just broad; and the ones that are funny are so sharp, so uncomfortably piercing, that they would likely bring gasps rather than laughs. (Jeff panics when the doorbell rings. His wife replies: "The Ku Klux Klan never rings the bell!") (A cop, harassing Jeff: "He stole something. We don't know what it is yet.")

There are more than a handful of dollops of anti-Asian racism throughout and a bit of homophobia, and more trade on the "old wives' tale" about Black male endowments, and sexuality generally, than are germane to the plot. (One last bit of piercing comedy, though: Jeff trying to canoodle with his wife, whose passion for him dims as soon as he turns Black: "What happened to the flaming liberal I married?" "I'm still liberal! But to a point.")

Nonetheless, there is a core principle here that slowly eases its way into the fore as the film proceeds, which is that a white man cannot become an ally for the eradication of white supremacy through imagination alone.

Jeff's lived experience as a Black man -- which, again, is not hand-waved away at the end of the film, but taken in an entirely different direction -- doesn't exactly turn him into a good person, but it sure as hell puts paid the delusions under which he'd been living, with respect to race and revolution in white supremacist America.

Watermelon Man is paired with a feature documentary on its disc, How To Eat Your Watermelon In White Company (And Enjoy It), which essays the director's entire career rather than focus on Watermelon Man, which is a shame. It's Van Peebles' sophomore feature that gets the shortest shrift in the Criterion set (though Raquel Gates' essay, in the outstanding in-set booklet, gives a good summary). I'm disappointed only in that the heist Van Peebles pulls here with studio money is dying for a bit more consideration than we're given.

Otherwise, Melvin Van Peebles: Essential Films is fulsome and exciting, and achieves its mission statement of presenting the director's early feature work as a continuum, rather than a single flash-in-the-an explosion. It was a hard thing to watch this a week after Van Peebles' death, and find myself both hopeful that more cinephiles will find their way into his work, and sad that we'll never get to hear him speak on it again. This set does a good job, and is long overdue; but the man himself, like his best-remembered character, could not be contained.