Toronto 2021 Review: EARWIG, A Hypnotic Reverie On How We Cope With Adversity 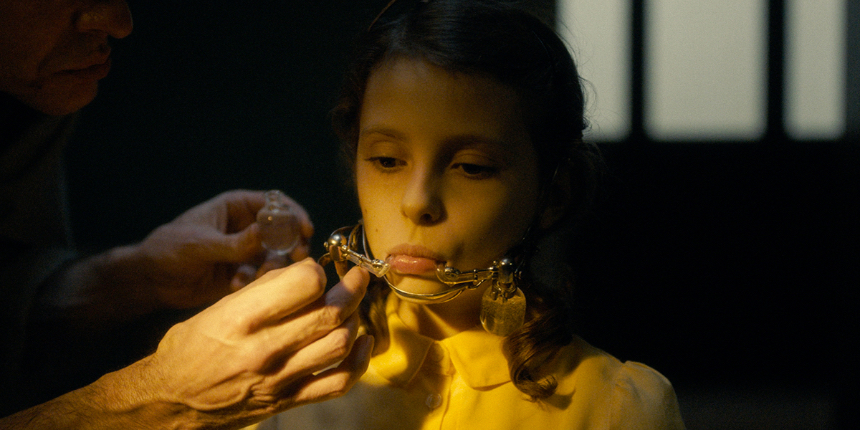 Somewhere, in a small apartment in Europe in the early 1950s, after the War, there was a little girl named Mia, who had no teeth. She had a melancholy caretaker who prepared ice-dentures for her several times a day, which she did not mind, but did not let her leave the house, which maybe she did. Mia played with papier-mâché pets, and marveled at the only decoration in the apartment, an oil-painting of a large manor estate in the country. That, and the wall of polished glass goblets that her caretaker took his wine with dinner.

Lucile Hadžihalilović's latest, deliciously oblique, film, Earwig, is less about the about the insect (although it does make a brief cameo at one point) and more about the words other meaning: eavesdropping. I am told that earwig was once a colloquialism for the act, but it has fallen out of favour. Cinema itself an act of spying on the characters, and their stories, and this film is as strange as anything else you might see, on the festival circuit, movie-house or streaming.

The opening moments of the film, preparing and installing Mia's ice-teeth, are a ritual, which Hadžihalilović shows us in a methodical but intimate way. Dentistry is scary enough for most people in the modern 21st century, but 75 years ago, it was the stuff of medieval nightmares; curved arrays of stainless steel, and leather straps bound around the skull, bulking out the face.

Before and after the ritualistic dental work, while Mia sleeps or plays, we see the caretaker (British Stage Actor, Paul Hilton, who has a magnificent face for closeups) with his composure dropped, cupping his face in his hands, clearly coping with something. We also see him use one of those polished cups and listen to Mia sleeping through the wall. He takes a phone call from a mysterious man where he calmly gives updates on her condition, “All is as it should be.”

That is, until he is instructed to start making changes to their routine.

Hadžihalilović's short, but focused, filmography deals with unusual institutions, and the innocent children who inhabit them: The bucolic boarding school of girls in Innocence, or the birthing-hospital by the sea, that also functions as an orphanage for little boys in Evolution. These films show the awakening awareness of the wider more dangerous world from an adolescent point of view.

With Earwig, these elements are present, the apartment is bare, and the isolated ticking clock makes it feel institutional. However, the focus is switched to the caretaker, Albert, who is coping with the loss of his wife, perhaps during the war, which he has repressed, and with letting Mia explore the outside world, which he cannot repress. She is right in front of him, and needs his care, whatever the master orders. When Mia breaks one of his goblets, he kindly, gingerly, wraps the broken pieces in individual squares of newsprint. The same material that Mia builds her imaginary pets.

The film has another plot, of a woman, Celeste (Romola Garaï), a barmaid at the tavern in the same village, who takes a horrible injury to her face from a broken bottle, and is herself cared for by a mysterious kindly man. A man who witnessed the violent act. As she takes the man’s Laudanum dispensed from an eye-dropper, like food to a newborn bird, we also see her begin to cope with her new reality.

The outside world is damp and gloomy - as otherworldly as the spare interiors. Jonathan Ricquebourg cinematography is some of the darkest, low-lit lensing in any movie that I can recall, outside of the opening act of David Lynch’s The Lost Highway, but it progresses towards some kind of illumination as the film unspools. Earwig was shot and projected digitally, but there is such an old-timey feel to the picture, that it is almost a crime that it is not running reel to reel. Augustin Viard’s score is an eerie, strings and wind, lullaby. And yet, to Mia, the park and river, and whatever lies ahead is still a world of wonders. She kneels down in the muck to experience it all. To Albert, it is only an ominous sign.

A new dentist arrives with a real pet, a black cat, and upgrades Mia’s teeth from ice to glass. Terrifying, but far more practical. The Mias of the world, who only know what they know, will, perhaps, be fine. But what about the Alberts or the Celestes, the more complicated adults?

Earwig is a poetic meditation, spartan in dialogue, but rich in mise-en-scene. As difficult as some of the imagery can be, the pain or distress visited upon faces, the isolated little worlds we create for ourselves, where time is stretched out. I do believe that Earwig is a hopeful tale about the resilience of the human spirit. Moreso, the strangely positive thing to have someone desire to eavesdrop on your existence, whatever they infer from the experience. The wider world dealt, and normalized, with the horrors of the great wars, or our current cycle of climate and pandemic. We adapt in strange and unusual ways, as painful as it is, but we adapt nonetheless.