Too much fun, frontal nudity and orgasms in a biopic drama enclosed behind the walls of a Renaissance convent. 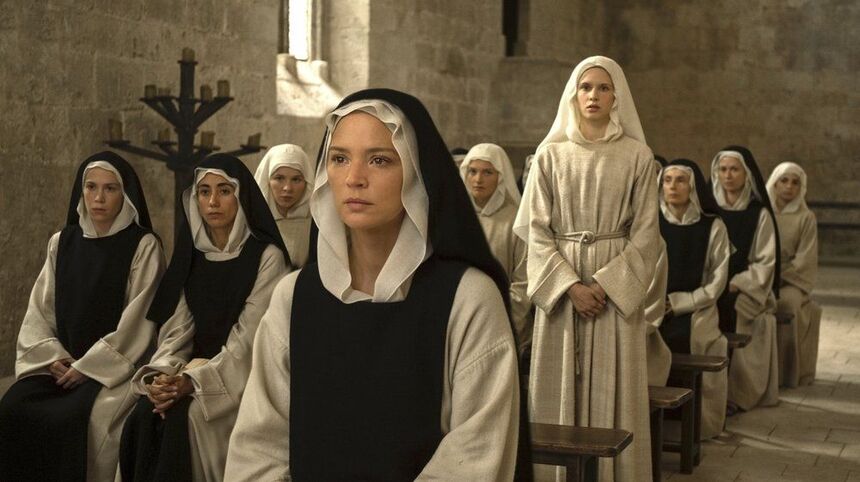 Based on an actual person, 17th-century Catholic mystic and lesbian nun Benedetta Carlini, the script by David Birke and Paul Verhoeven, adapted from the book Immodest Acts: The Life of a Lesbian Nun in Renaissance Italy by Judith C. Brown, has the loose contours of a period biopic, although that was obviously not the primary intention of the Dutch filmmaker.

The film starts with Benedetta's (Virginie Efira) childhood and her first "miracle" that seemingly predestines her for a path of a saint as a dutiful follower/daughter and worshipper of the Virgin Mary. Her wealthy father enrolls her into the convent in the pre-plague Tuscan town of Pescia under the stern mentorship of the Abbess, portrayed with gusto by Charlotte Rampling.

Verhoeven fast forwards into Benedetta's adulthood as she is still serving in the convent, however,  the latest arrival -- a countryside firecracker named Bartolomea (Daphné Patakia) -- triggers Benedetta's upward mobility in the convent's rank. The campy visions of a buffed Jesus, her husband in figurative meaning and a savior in literal meaning, are soon replaced by more explicit manifestations, such as stigmata. Benedetta not only cannot hide the markings of a saint, she leverages the holy sign for a better position. 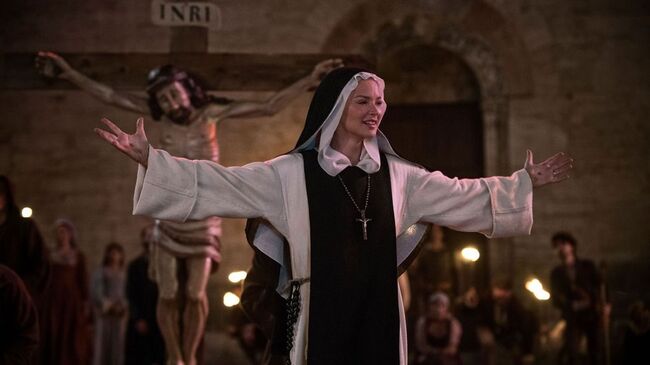 Benedetta starts causing locomotion within the convent and beyond its walls, drawing the attention of the Church officials, while starting to put the insignificant town of Pescia on the world map. The growing interest in the visionary nun coincides with her lusting after the non-conformist Bartolomea Crivelli, at which point the film manages to show more frontal nudity than would have been considered appropriate for a Renaissance-era convent.

Nudity is not the only commodity that is being supplied in excess. The other one is humor. Besides the exaggerated and deliberately naïve visions of Jesus, one-liners are flying through the convent in a surprising cadence for a counter-Reformation period drama dealing with Church politics and the incoming apocalypse.

Indeed, Verhoeven reimagines Benedetta Carlini's life story as a soft-erotic thriller, which is the Dutch director's specialty, and the raunchy (romantic) comedy basically taunts to be called blasphemous. Verhoeven proves that he can craftily merge what would have been considered polar opposites, as Benedetta is as close to a high-production value satire as it is to a camp nunsploitation drama tackling religion and politics in the same single stroke.

The film's schizophrenic nature corresponds to the personality of the leading protagonist, as Benedetta remains an ambivalent character throughout the whole film. A heroine and anti-heroine at the same time, it never transpires whether she is the real deal or a cold-hearted deceiver scheming trustful nuns, and Virginie Efira keeps playing the role ambiguously. Nevertheless, Verhoeven has a large playfield for topics of ecstasy and mysticism, faith and politics, madness and reason, desire and authority, piousness and vanity.

Benedetta has several layers and enough motifs running around the eccentric central character,  although one stands out in its timelessness. Regardless of whether Sister Benedetta's "holiness" is a product of a self-inflicted delusion (through sadomasochistic revelations/fantasies), hyperphantasia, or a very rational calculation, her character can be interpreted as a perfect con artist who fakes it until she makes it in the Church's pseudo-corporate hierarchy.

Yet Sister Benedetta's cockiness makes her a fan favorite, and it is hard to not root for her and admire her. Disregarding Verhoeven's creative license and the character's self-aggrandizement, Benedetta is challenging the period norms and patriarchal authority in a proto-feminist context.

She manages to regain agency in her life and social status in the era when it was not so common. In this regard, Benedetta is treading a similar path of gender politics as Ninja Thyberg's riveting drama Pleasure.

Do you feel this content is inappropriate or infringes upon your rights? Click here to report it, or see our DMCA policy.
Karlovy Vary 2021Paul VerhoevenDavid BirkeJudith C. BrownVirginie EfiraCharlotte RamplingDaphne PatakiaBiographyDramaHistory