This year the Neuchâtel International Fantastic Film Festival had a treat for the locals programmed in at the end: the International première of Swiss film-maker Tim Fehlbaum's apocalyptic science fiction action drama Tides (soon to be released state-side as The Colony). It proved popular as well, and Fehlbaum left the festival with two awards in his pocket, one of them granted by the festival's audiences.

There sure was no shortage of genre films at the festival carrying messages about being careful with the environment this year, and Tides fit right in. Earth has been strip-mined and polluted to the point of having become unlivable, and all the rich folks have left for another planet while everyone else could go get extinct (topical...). Unfortunately, a few generations later the space humans become infertile, and expeditions are sent back to Earth to check if conditions have maybe improved a bit in the last decades. The film then follows Blake, a member of the second expedition. She has ulterior motives for joining the dangerous program: her father was part of the first expedition, with which all contact was lost shortly after landing, and she hopes to discover what happened. 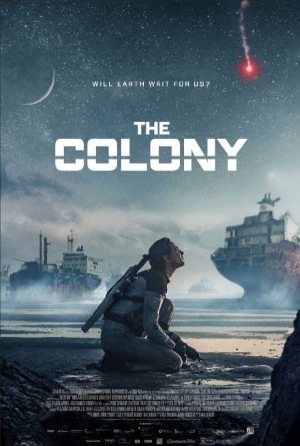 The part of Earth where her expedition crash-lands turns out to be an endless mudflat during low tide, and a rainy sea during high tide. To Blake's surprise they encounter humans, fertile survivors who managed to stay alive on Earth for generations by inhabiting floating island villages and the rusting hulks of giant old ships. Unfortunately these survivors are hardened and hostile towards strangers. In this world, will Blake find out what happened to her father and the previous expedition? And what is the purpose of her expedition anyway, now that humanity turns out to be alive and kicking?

After a suspenseful start it looks like the film will develop into an interesting, intelligent take on the post-apocalyptic thriller, but unfortunately Tides becomes a generic action flick, good guys fighting bad guys. And while the setting is somewhat interesting, it is also bleak, visually dull and colorless. From the moment you see the first settlement you think of Waterworld, and life on the big ships is incredibly reminiscent of the Fallout 3 video-game, down to the color palette and the details. It doesn't help that that game also featured someone thrust from a high-tech bubble into a hostile post-apocalyptic world, looking for his/her father... And while the film is decently made and nothing stands out as truly bad, nothing stands out as particularly original either. I do not expect a Fallout game to be able to crib anything notable from this film, for example (unlike the other way round).

But Nora Arnezeder as Blake and Sarah-Sofie Boussnina as the settlement warrior Narvik make for strong, likable and very watchable leads, several notches above the exploitational stereotypes they could have been. In contrast, Iain Glen seems to have been told to do exactly the same thing as he did in Game of Thrones, and might as well have been talking to a white-haired girl all the time.

In the end Tides is decent, well-made (the other award it won in Neuchâtel was for its art-direction) and played incredibly well to the home crowd. But it never elevates above "decent", and for me it misses the spark, the original jolt, a few crazy details even, the things which make cult classics out of small science fiction films like these. As it is, let it wash over you, and see what sticks afterwards. Don't expect a big haul and you might not be disappointed.

Tides (slash The Colony) will be released in several countries in the week of August 22nd.