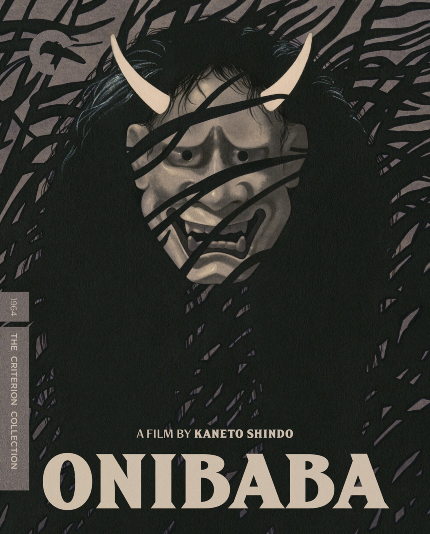 In the middle of a newly expanded blockbuster season, I'm in the mood for Criterion.

The specialty label announced their upcoming, atypical arthouse releases for the stereotypical scary season (i.e. October 2021), and the first one that jumps out at me is Onibaba, for the reasons highlighted in the official Criterion Collection release announcement:

"Deep in the windswept marshes of war-torn medieval Japan, an impoverished older woman and her daughter-in-law murder lost samurai and sell their belongings for the most meager of sustenance. When a bedraggled neighbor returns from battle, lust, jealousy, and rage threaten to destroy the trio's tenuous existence, before an ominous, ill-gotten demon mask seals their horrifying fate.

"Driven by primal emotions, dark eroticism, a frenzied score by Hikaru Hayashi, and stunning images both lyrical and macabre, the chilling folktale Onibaba by Kaneto Shindo conjures a nightmarish vision of humankind's deepest desires and impulses."

If a "chilling folktale" does not appeal to your sensibility, perhaps Devi does? Again, from the official Criterion verbiage:

"Wealthy rural landowner (Chhabi Biswas) is seized by the notion that his beloved daughter-in-law (a hauntingly sad-eyed Sharmila Tagore) is the reincarnation of the goddess Kali--a delusion that proves devastating to the young woman and those around her."

Directed by Satyajit Ray, Devi may not fit with your particular set of beliefs, so perhaps something a little more bleak, "a haunting evocation of a troubled Glasgow childhood" in Ratcatcher?

"Set during Scotland's national garbage strike of the mid-1970s, Ratcatcher explores the experiences of a poor adolescent boy as he struggles to reconcile his dreams and his guilt with the abjection that surrounds him."

If Lynne Ramsay's directorial debut is not your style, Criterion Collection will also be rolling out the Safdie brothers' Uncut Gems, starring Adam Sandler remembering that he is an actor; Raoul Walsh's High Sierra, for those who love a little grubby Humphrey Bogart; and Jack Arnold's towering The Incredible Shrinking Man, who may make aspiring filmmakers shrink back in humility from the idea of trying to top it.

Or, you can sit at home, counting your pennies, and recreating all these offerings in the fever of your own nightmares. Your choice. For those who choose Criterion, visit their online home for more information.