Review: THINGS HEARD AND SEEN, A Failure As Domestic Drama and Supernatural Thriller 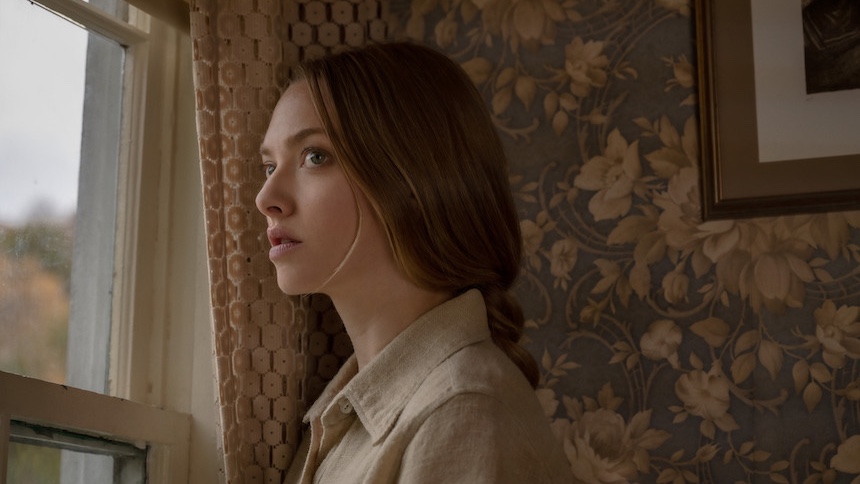 A semi-perplexing prologue that suggests the aftermath of violence quickly gives way to a title card and a feature-length flashback centering on Seyfried’s character, Catherine Claire (Amanda Seyfried), a New York City-based art restorer, Catherine’s husband and the recent recipient of a gold-plated Columbia PhD., George (James Norton), and their preteen daughter, Franny (Ana Sophia Heger). A job offer for George leaves Catherine, already self-harming as a means for coping with a fracturing marriage, at a crossroads: Leave NYC and her career behind, pack up and move with George to upstate New York where her husband can begin his career in earnest at a small, private academic institution, Saginaw College, teaching art history, specifically art history focused on the landscape-centric, spiritually infused work of the Hudson Valley School.

Surprising no one in particular, including apparently herself, Catherine picks George and his academic career over her own personal and professional needs. The rustic farmhouse that awaits them on the other side of a long drive has all the charms and not-so-secret spaces typical of the supernatural sub-genre. Given George’s presumably meager salary as an associate professor at a small private college, they can’t be particularly picky about non-paying guests or ghostly squatters. Even when the realtor, Mare Laughton (Karen Allen, a welcome, if brief, presence), shares the house’s Amityville Horror-inspired history, George doesn’t hesitate for a moment.

In fact, George consciously decides not to tell Catherine about their new home's sordid history, superficially because he wants to protect her emotional health, but because George is wholly defined and moved by the worst impulses, drives, and attitudes of a regressive, retrograde era (i.e., toxic masculinity). For George, possessive control over everything, including Catherine, is everything.

Things Heard & Seen takes more than a few logic-challenged, eyebrow-raising twists, turns, and swerves into well-trod literary and cinematic territory, specifically The Shining and What Lies Beneath, paling in comparison to both. While Catherine, helped by a seemingly benevolent house spirit, gradually awakens to the real man she married out of duty and obligation, George takes a parallel journey, a psychological and literal descent from superficially happy husband and first-time academic basking in the attention of his students and peers, to master manipulator, gaslighter general, and physical, existential threat to Catherine and Franny, as well as George’s colleague, Justine Sokolov (Rhea Seehorn), who befriends Catherine. As Catherine reluctantly discovers, the terror, like the proverbial call, is coming from inside the house.

Multiple subplots and sub-threads involving seance- and spirituality-curious academics, including George’s fatherly mentor, Floyd DeBeers (Oscar winner F. Murray Abraham), and two of the house’s previous occupants, Eddy Lucks (Alex Neustaedter), a piano-playing handyman, and his brother, Cole (Jack Gore), Franny’s present and future babysitter, ultimately go nowhere, functioning primarily to misdirect, divert, and distract from the central storyline, Catherine and George’s disintegrating marriage and the secrets George may or may not be hiding from Catherine and the outside world.

In turn, Catherine and George’s increasingly fracturing, fissuring marriage sets up a bungled, ill-conceived, poorly executed third-act followed a faux-feel-good ending that offers cold comfort in response to the real-life horrors of domestic violence. Berman and Pulcini unapologetically embrace the source material's underlying theme that a better life awaits the spiritually inclined, if not in their (or our) earthly life, then in the afterlife. It's the kind of message that accepts without challenge or reflection a deeply problematic, catch-all excuse for suffering and inaction in response to abuse and violence.